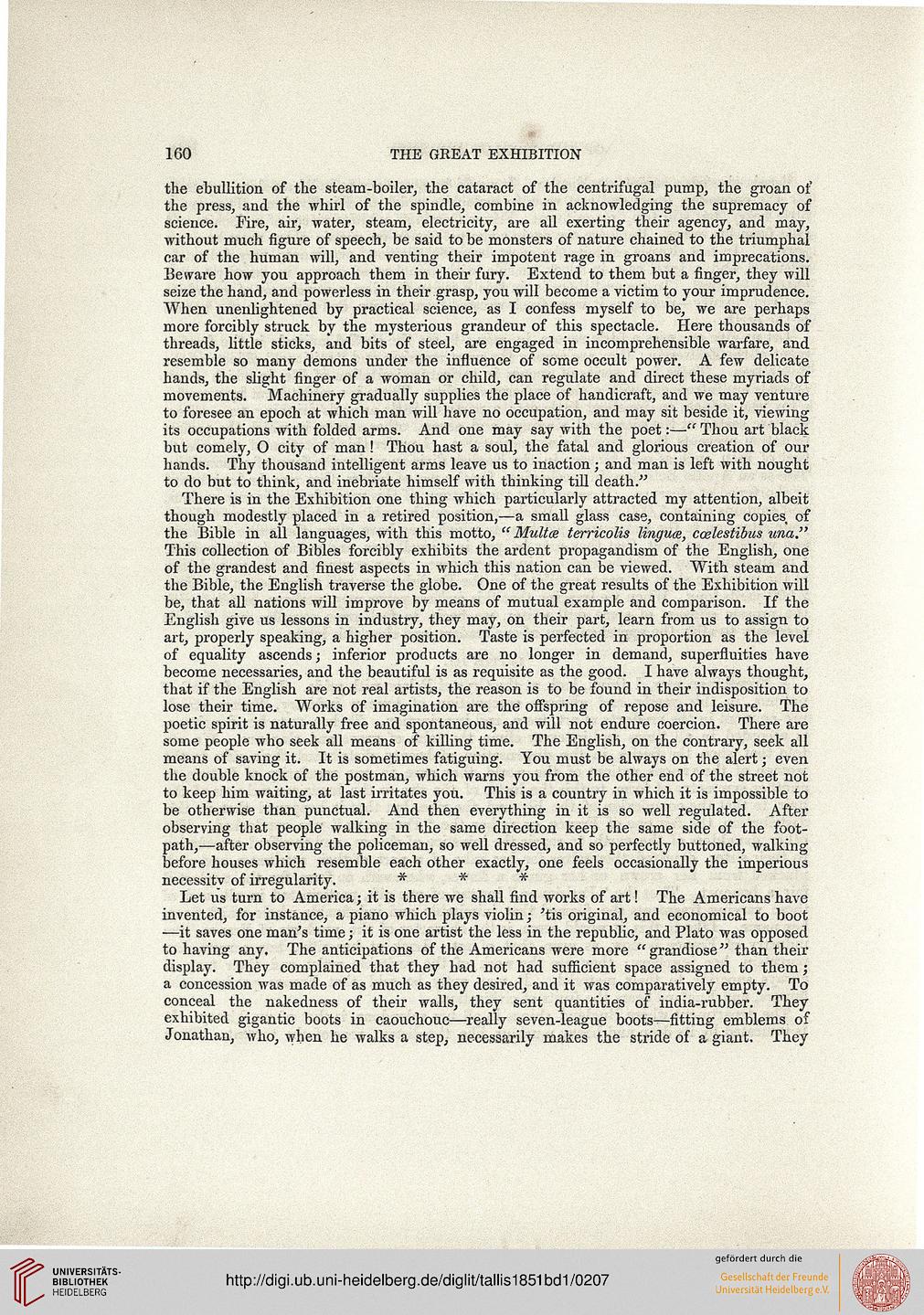 the ebullition of the steam-boiler, the cataract of the centrifugal pump, the groan of
the press, and the whirl of the spindle, combine in acknowledging the supremacy of
science. Fire, air, water, steam, electricity, are all exerting their agency, and may,
without much figure of speech, be said to be monsters of nature chained to the triumphal
car of the human will, and venting their impotent rage in groans and imprecations.
Beware how you approach them in their fury. Extend to them but a finger, they will
seize the hand, and powerless in their grasp, you will become a victim to your imprudence.
When unenlightened by practical science, as I confess myself to be, we are perhaps
more forcibly struck by the mysterious grandeur of this spectacle. Here thousands of
threads, little sticks, and bits of steel, are engaged in incomprehensible warfare, and
resemble so many demons under the influence of some occult power. A few delicate
hands, the slight finger of a woman or child, can regulate and direct these myriads of
movements. Machinery gradually supplies the place of handicraft, and we may venture
to foresee an epoch at which man will have no occupation, and may sit beside it, viewing
its occupations with folded arms. And one may say with the poet:—" Thou art black
but comely, O city of man! Thou hast a soul, the fatal and glorious creation of our
hands. Thy thousand intelligent arms leave us to inaction; and man is left with nought
to do but to think, and inebriate himself with thinking till death."

There is in the Exhibition one thing which particularly attracted my attention, albeit
though modestly placed in a retired position,—a small glass case, containing copies, of
the Bible in all languages, with this motto, " Multce terricolis lingiw, ccelestibus una."
This collection of Bibles forcibly exhibits the ardent propagandism of the English, one
of the grandest and finest aspects in which this nation can be viewed. "With steam and
the Bible, the English traverse the globe. One of the great results of the Exhibition will
be, that all nations will improve by means of mutual example and comparison. If the
English give us lessons in industry, they may, on their part, learn from us to assign to
art, properly speaking, a higher position. Taste is perfected in proportion as the level
of equality ascends; inferior products are no longer in demand, superfluities have
become necessaries, and the beautiful is as requisite as the good. I have always thought,
that if the English are not real artists, the reason is to be found in their indisposition to
lose their time. Works of imagination are the offspring of repose and leisure. The
poetic spirit is naturally free and spontaneous, and will not endure coercion. There are
some people who seek all means of killing time. The English, on the contrary, seek all
means of saving it. It is sometimes fatiguing. You must be always on the alert; even
the double knock of the postman, which warns you from the other end of the street not
to keep him waiting, at last irritates you. This is a country in which it is impossible to
be otherwise than punctual. And then everything in it is so well regulated. After
observing that people walking in the same direction keep the same side of the foot-
path,—after observing the policeman, so well dressed, and so perfectly buttoned, walking
before houses which resemble each other exactly, one feels occasionally the imperious
necessitv of irregularity. * * *

Let us turn to America; it is there we shall find works of art! The Americans have
invented, for instance, a piano which plays violin; 'tis original, and economical to boot
—it saves one man's time; it is one artist the less in the republic, and Plato was opposed
to having any. The anticipations of the Americans were more " grandiose" than their
display. They complained that they had not had sufficient space assigned to them;
a concession was made of as much as they desired, and it was comparatively empty. To
conceal the nakedness of their walls, they sent quantities of india-rubber. They
exhibited gigantic boots in caouchouc—really seven-league boots—fitting emblems of
Jonathan, who, when he walks a step, necessarily makes the stride of a giant. They