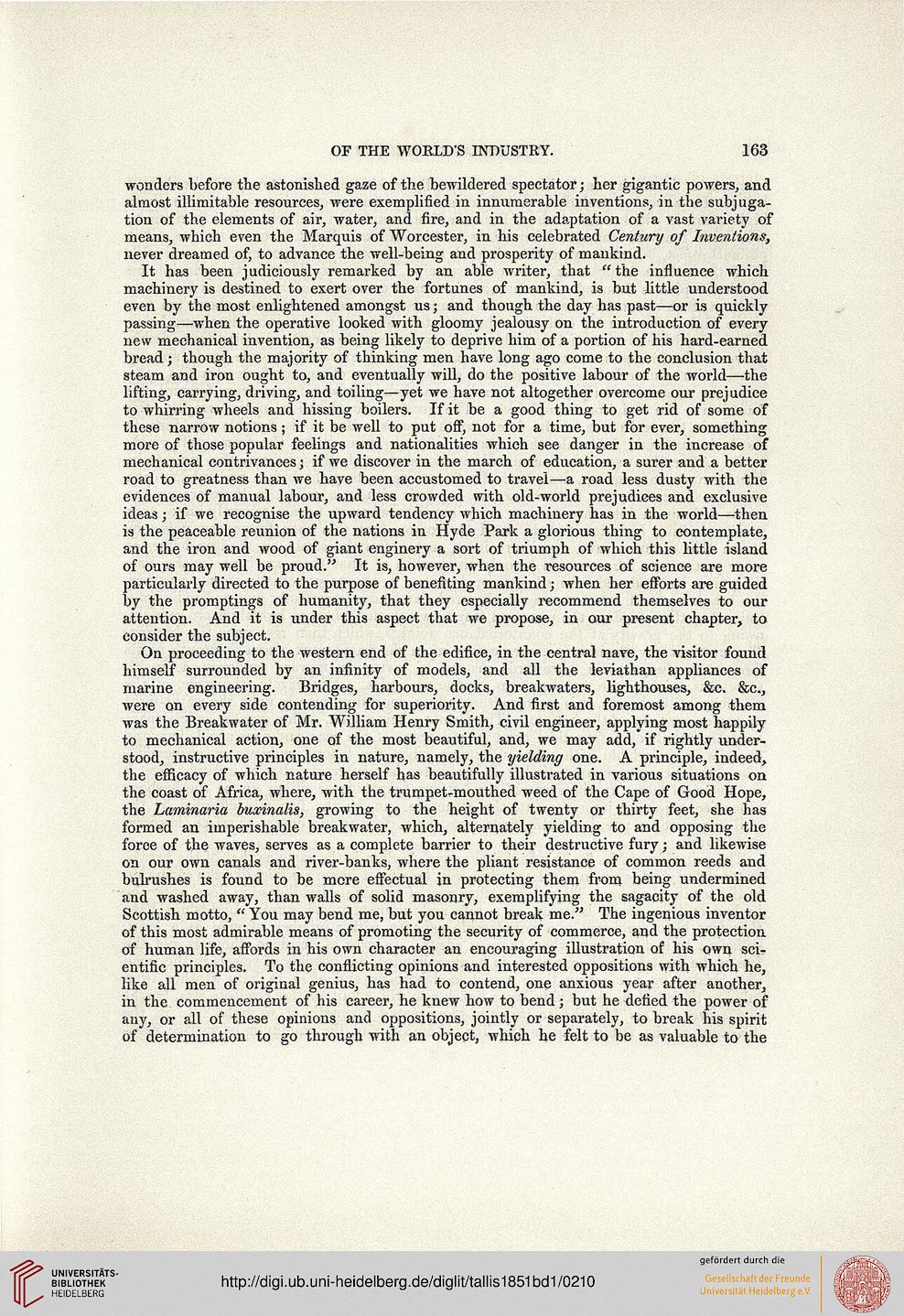 Information about OCR text
OF THE WORLD'S INDUSTRY. 163

wonders before the astonished gaze of the bewildered spectator; her gigantic powers, and
almost illimitable resources, were exemplified in innumerable inventions, in the subjuga-
tion of the elements of air, water, and fire, and in the adaptation of a vast variety of
means, which even the Marquis of Worcester, in his celebrated Century of Inventions,
never dreamed of, to advance the well-being and prosperity of mankind.

It has been judiciously remarked by an able writer, that "the influence which
machinery is destined to exert over the fortunes of mankind, is but little understood
even by the most enlightened amongst us j and though the day has past—or is quickly
passing—when the operative looked with gloomy jealousy on the introduction of every
new mechanical invention, as being likely to deprive him of a portion of his hard-earned
bread; though the majority of thinking men have long ago come to the conclusion that
steam and iron ought to, and eventually will, do the positive labour of the world—the
lifting, carrying, driving, and toiling—yet we have not altogether overcome our prejudice
to whirring wheels and hissing boilers. If it be a good thing to get rid of some of
these narrow notions; if it be well to put off, not for a time, but for ever, something
more of those popular feelings and nationalities which see danger in the increase of
mechanical contrivances; if we discover in the march of education, a surer and a better
road to greatness than we have been accustomed to travel—a road less dusty with the
evidences of manual labour, and less crowded with old-world prejudices and exclusive
ideas; if we recognise the upward tendency which machinery has in the world—then
is the peaceable reunion of the nations in Hyde Park a glorious thing to contemplate,
and the iron and wood of giant enginery" a sort of triumph of which this little island
of ours may well be proud." It is, however, when the resources of scienee are more
particularly directed to the purpose of benefiting mankind; when her efforts are guided
by the promptings of humanity, that they especially recommend themselves to our
attention. And it is under this aspect that we propose, in our present chapter, to
consider the subject.

On proceeding to the western end of the edifice, in the central nave, the visitor found
himself surrounded by an infinity of models, and all the leviathan appliances of
marine engineering. Bridges, harbours, docks, breakwaters, lighthouses, &c. &c,
were on every side contending for superiority. And first and foremost among them
was the Breakwater of Mr. William Henry Smith, civil engineer, applying most happily
to mechanical action, one of the most beautiful, and, we may add, if rightly under-
stood, instructive principles in nature, namely, the yielding one. A principle, indeed,
the efficacy of which nature herself has beautifully illustrated in various situations on
the coast of Africa, where, with the trumpet^mouthed weed of the Cape of Good Hope,
the Laminaria buooinalis, growing to the height of twenty or thirty feet, she has
formed an imperishable breakwater, which, alternately yielding to and opposing the
force of the waves, serves as a complete barrier to their destructive fury; and likewise
on our own canals and river-banks, where the pliant resistance of common reeds and
bulrushes is found to be more effectual in protecting them from being undermined
and washed away, than walls of solid masonry, exemplifying the sagacity of the old
Scottish motto, " You may bend me, but you cannot break me." The ingenious inventor
of this most admirable means of promoting the security of commerce, and the protection
of human life, affords in his own character an encouraging illustration of his own sci?
entific principles. To the conflicting opinions and interested oppositions with which he,
like all men of original genius, has had to contend, one anxious year after another,
in the commencement of his career, he knew how to bend; but he defied the power of
any, or all of these opinions and oppositions, jointly or separately, to break his spirit
of determination to go through with an object, which he felt to be as valuable to the