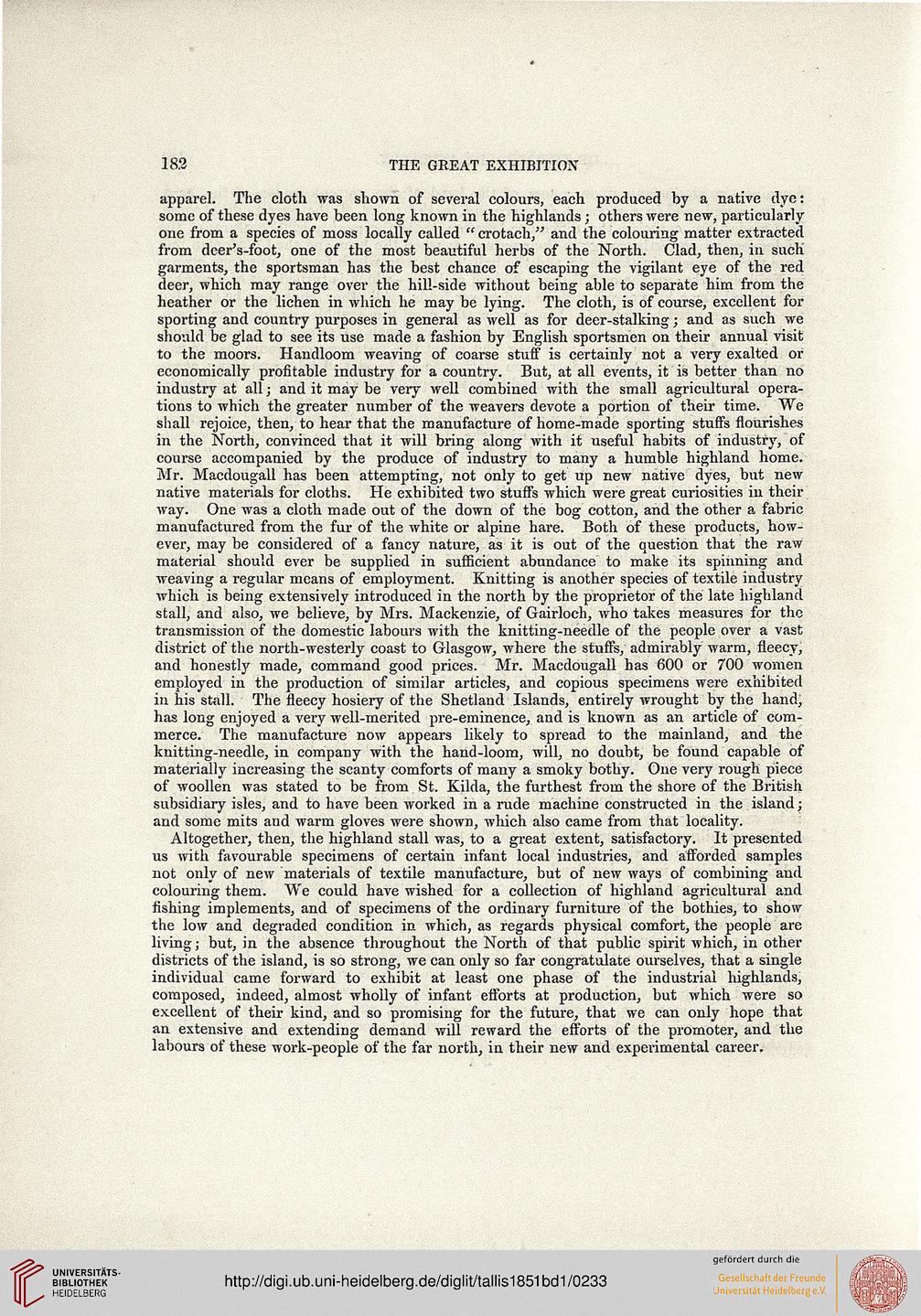 apparel. The cloth was shown, of several colours, each produced by a native dye:
some of these dyes have been, long known in the highlands; others were new, particularly
one from a species of moss locally called "crotach," and the colouring matter extracted
from dcer's-foot, one of the most beautiful herbs of the North. Clad, then, in such
garments, the sportsman has the best chance of escaping the vigilant eye of the red
deer, which may range over the hill-side without being able to separate him from the
heather or the lichen in which he may be lying. The cloth, is of course, excellent for
sporting and country purposes in general as well as for deer-stalking; and as such we
should be glad to see its use made a fashion by English sportsmen on their annual visit
to the moors. Haudloom weaving of coarse stuff is certainly not a very exalted or
economically profitable industry for a country. But, at all events, it is better than no
industry at all; and it may be very well combined with the small agricultural opera-
tions to which the greater number of the weavers devote a portion of their time. We
shall rejoice, then, to hear that the manufacture of home-made sporting stuffs flourishes
in the North, convinced that it will bring along with it useful habits of industry, of
course accompanied by the produce of industry to many a humble highland home.
Mr. Macdougall has been attempting, not only to get up new native dyes, but new
native materials for cloths. He exhibited two stuffs which were great curiosities in their
way. One was a cloth made out of the down of the bog cotton, and the other a fabric
manufactured from the fur of the white or alpine hare. Both of these products, how-
ever, may be considered of a fancy nature, as it is out of the question that the raw
material should ever be supplied in sufficient abundance to make its spinning and
weaving a regular means of employment. Knitting is another species of textile industry
which is being extensively introduced in the north by the proprietor of the late highland
stall, and also, we believe, by Mrs. Mackenzie, of Gairloch, who takes measures for the
transmission of the domestic labours with the knitting-needle of the people over a vast
district of the north-westerly coast to Glasgow, where the stuffs, admirably warm, Heecy,
and honestly made, command good prices. Mr. Macdougall has 600 or 700 women
employed in the production of similar articles, and copious specimens were exhibited
in his stall. The fleecy hosiery of the Shetland Islands, entirely wrought by the hand,
has long enjoyed a very well-merited pre-eminence, and is known as an article of com-
merce. The manufacture now appears likely to spread to the mainland, and the
knitting-needle, in company with the hand-loom, will, no doubt, be found capable of
materially increasing the scanty comforts of many a smoky bothy. One very rough piece
of woollen was stated to be from St. Kilda, the furthest from the shore of the British
subsidiary isles, and to have been worked in a rude machine constructed in the island;
and some mits and warm gloves were shown, which also came from that locality.

Altogether, then, the highland stall was, to a great extent, satisfactory. It presented
us with favourable specimens of certain infant local industries, and afforded samples
not only of new materials of textile manufacture, but of new ways of combining and
colouring them. We could have wished for a collection of highland agricultural and
fishing implements, and of specimens of the ordinary furniture of the bothies, to show
the low and degraded condition in which, as regards physical comfort, the people are
living j but, in the absence throughout the North of that public spirit which, in other
districts of the island, is so strong, we can only so far congratulate ourselves, that a single
individual came forward to exhibit at least one phase of the industrial highlands,
composed, indeed, almost wholly of infant efforts at production, but which were so
excellent of their kind, and so promising for the future, that we can only hope that
an extensive and extending demand will reward the efforts of the promoter, and the
labours of these work-people of the far north, in their new and experimental career.