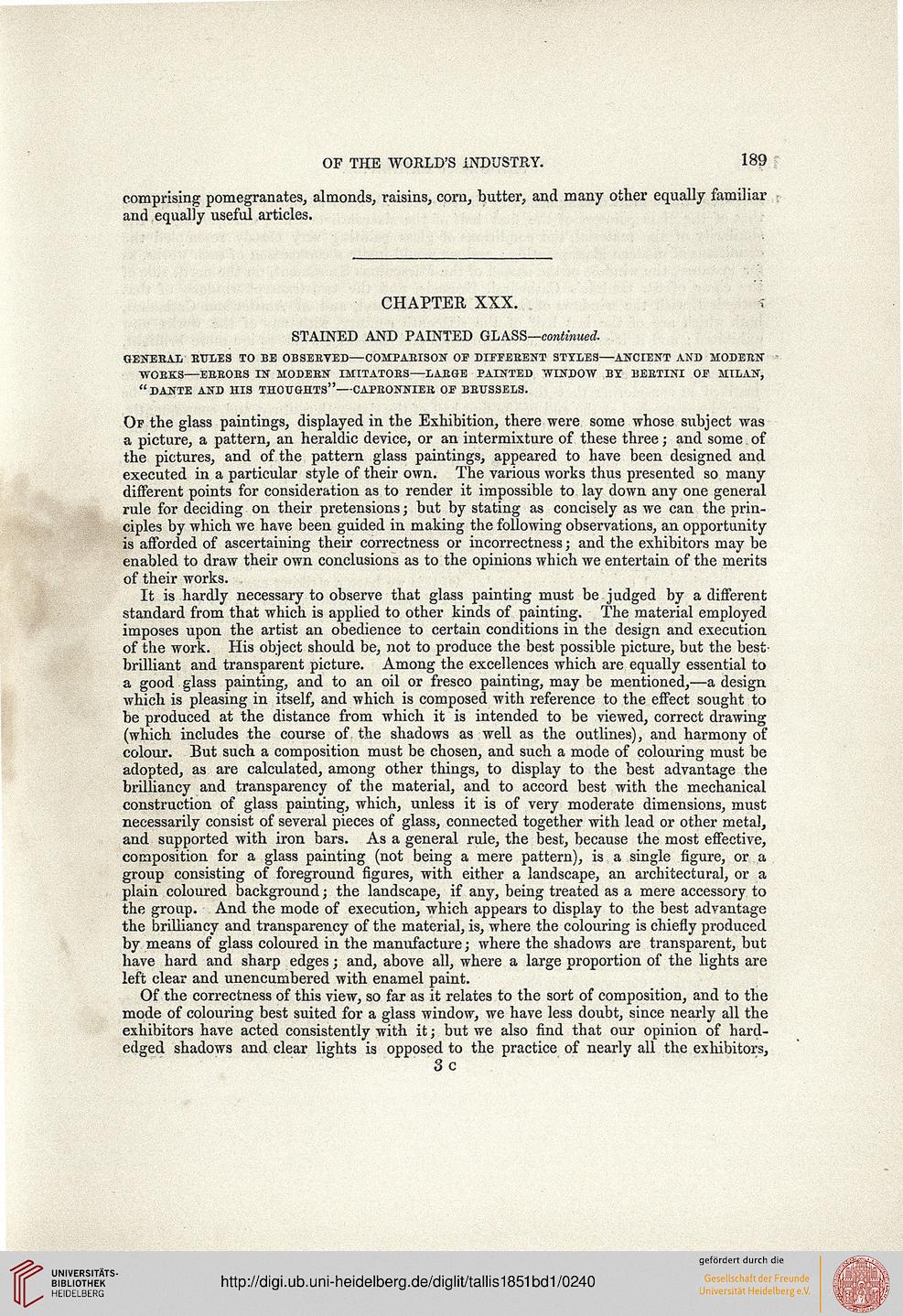 Information about OCR text
OF THE "WORLD'S INDUSTRY. 189 :

Of the glass paintings, displayed in the Exhibition, there were some whose subject was
a picture, a pattern, an heraldic device, or an intermixture of these three; and some of
the pictures, and of the pattern glass paintings, appeared to have been designed and
executed in a particular style of their own. The various works thus presented so many
different points for consideration as to render it impossible to lay down any one general
rule for deciding on their pretensions; but by stating as concisely as we can the prin-
ciples by which we have been guided in making the following observations, an opportunity
is afforded of ascertaining their correctness or incorrectness; and the exhibitors may be
enabled to draw their own conclusions as to the opinions which we entertain of the merits
of their works.

It is hardly necessary to observe that glass painting must be judged by a different
standard from that which is applied to other kinds of painting. The material employed
imposes upon the artist an obedience to certain conditions in the design and execution
of the work. His object should be, not to produce the best possible picture, but the best-
brilliant and transparent picture. Among the excellences which are equally essential to
a good glass painting, and to an oil or fresco painting, may be mentioned,—a design
which is pleasing in itself, and which is composed with reference to the effect sought to
be produced at the distance from which it is intended to be viewed, correct drawing
(which includes the course of. the shadows as well as the outlines), and harmony of
colour. But such a composition must be chosen, and such a mode of colouring must be
adopted, as are calculated, among other things, to display to the best advantage the
brilliancy and transparency of the material, and to accord best with the mechanical
construction of glass painting, which, unless it is of very moderate dimensions, must
necessarily consist of several pieces of glass, connected together with lead or other metal,
and supported with iron bars. As a general rule, the best, because the most effective,
composition for a glass painting (not being a mere pattern), is a single figure, or a
group consisting of foreground figures, with either a landscape, an architectural, or a
plain coloured background ; the landscape, if any, being treated as a mere accessory to
the group. And the mode of execution, which appears to display to the best advantage
the brilliancy and transparency of the material, is, where the colouring is chiefly produced
by means of glass coloured in the manufacture; where the shadows are transparent, but
have hard and sharp edges; and, above all, where a large proportion of the lights are
left clear and unencumbered with enamel paint.

Of the correctness of this view, so far as it relates to the sort of composition, and to the
mode of colouring best suited for a glass window, we have less doubt, since nearly all the
exhibitors have acted consistently with it; but we also find that our opinion of hard-
edged shadows and clear lights is opposed to the practice of nearly all the exhibitors,