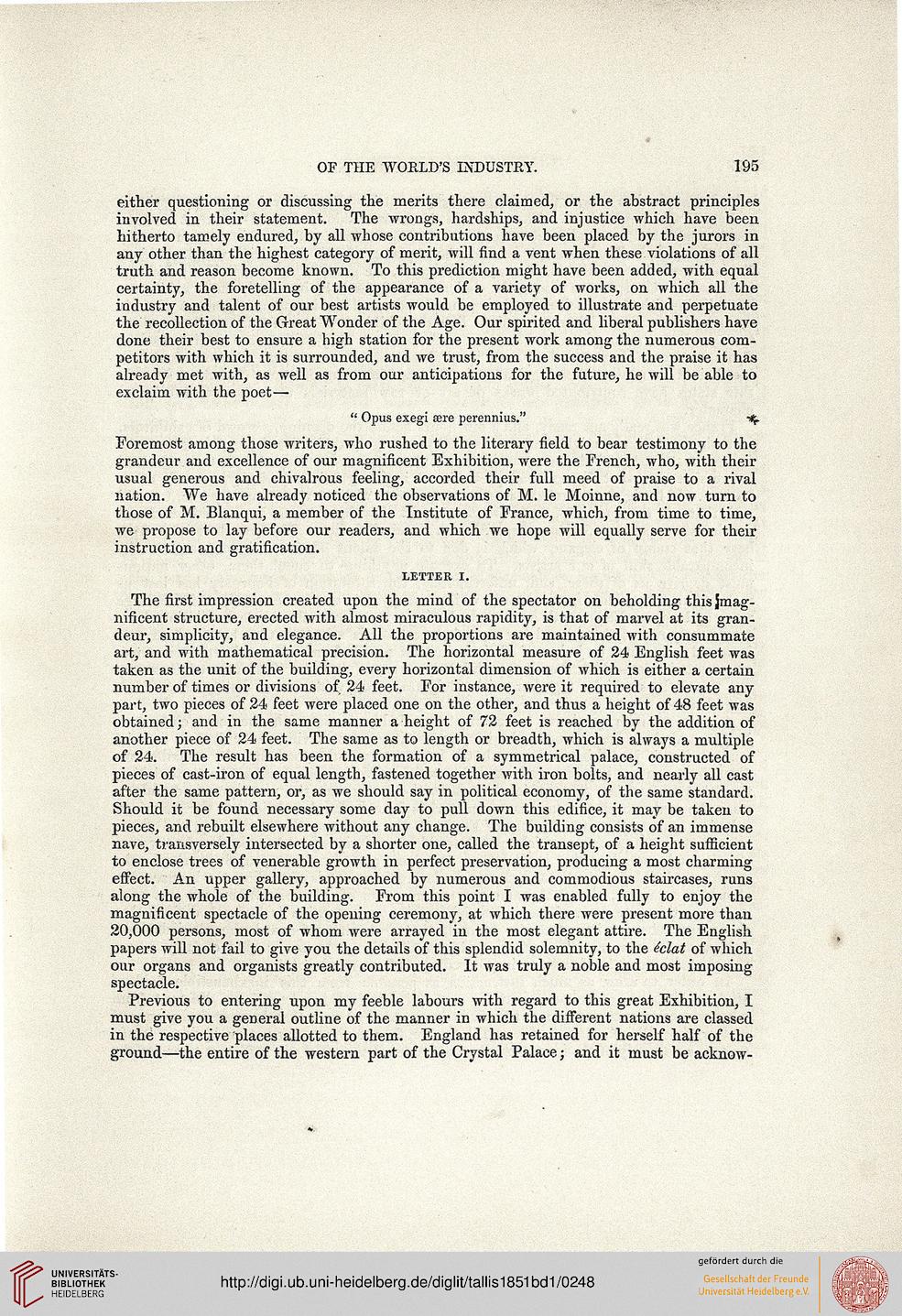 Information about OCR text
OF THE WORLD'S INDUSTRY. 195

either questioning or discussing the merits there claimed, or the abstract principles
involved in their statement. The wrongs, hardships, and injustice which have been
hitherto tamely endured, by all whose contributions have been placed by the jurors in
any other than the highest category of merit, will find a vent when these violations of all
truth and reason become known. To this prediction might have been added, with equal
certainty, the foretelling of the appearance of a variety of works, on which all the
industry and talent of our best artists would be employed to illustrate and perpetuate
the recollection of the Great Wonder of the Age. Our spirited and liberal publishers have
done their best to ensure a high station for the present work among the numerous com-
petitors with which it is surrounded, and we trust, from the success and the praise it has
already met with, as well as from our anticipations for the future, he will be able to
exclaim with the poet—

Foremost among those writers, who rushed to the literary field to bear testimony to the
grandeur and excellence of our magnificent Exhibition, were the French, who, with their
usual generous and chivalrous feeling, accorded their full meed of praise to a rival
nation. We have already noticed the observations of M. le Moinne, and now turn to
those of M. Blanqui, a member of the Institute of Prance, which, from time to time,
we propose to lay before our readers, and which we hope will equally serve for their
instruction and gratification.

The first impression created upon the mind of the spectator on beholding thisjmag-
nificent structure, erected with almost miraculous rapidity, is that of marvel at its gran-
deur, simplicity, and elegance. All the proportions are maintained with consummate
art, and with mathematical precision. The horizontal measure of 24 English feet was
taken as the unit of the building, every horizontal dimension of which is either a certain
number of times or divisions of 24 feet. For instance, were it required to elevate any
part, two pieces of 24 feet were placed one on the other, and thus a height of 48 feet was
obtained; and in the same manner a height of 72 feet is reached by the addition of
another piece of 24 feet. The same as to length or breadth, which is always a multiple
of 24. The result has been the formation of a symmetrical palace, constructed of
pieces of cast-iron of equal length, fastened together with iron bolts, and nearly all cast
after the same pattern, or, as we should say in political economy, of the same standard.
Should it be found necessary some day to pull down this edifice, it may be taken to
pieces, and rebuilt elsewhere without any change. The building consists of an immense
nave, transversely intersected by a shorter one, called the transept, of a height sufficient
to enclose trees of venerable growth in perfect preservation, producing a most charming
effect. An upper gallery, approached by numerous and commodious staircases, runs
along the whole of the building. From this point I was enabled fully to enjoy the
magnificent spectacle of the opening ceremony, at which there were present more than
20,000 persons, most of whom were arrayed in the most elegant attire. The English
papers will not fail to give you the details of this splendid solemnity, to the 4clat of which
our organs and organists greatly contributed. It was truly a noble and most imposing
spectacle.

Previous to entering upon my feeble labours with regard to this great Exhibition, I
must give you a general outline of the manner in which the different nations are classed
in the respective places allotted to them. England has retained for herself half of the
ground—the entire of the western part of the Crystal Palace; and it must be acknow-