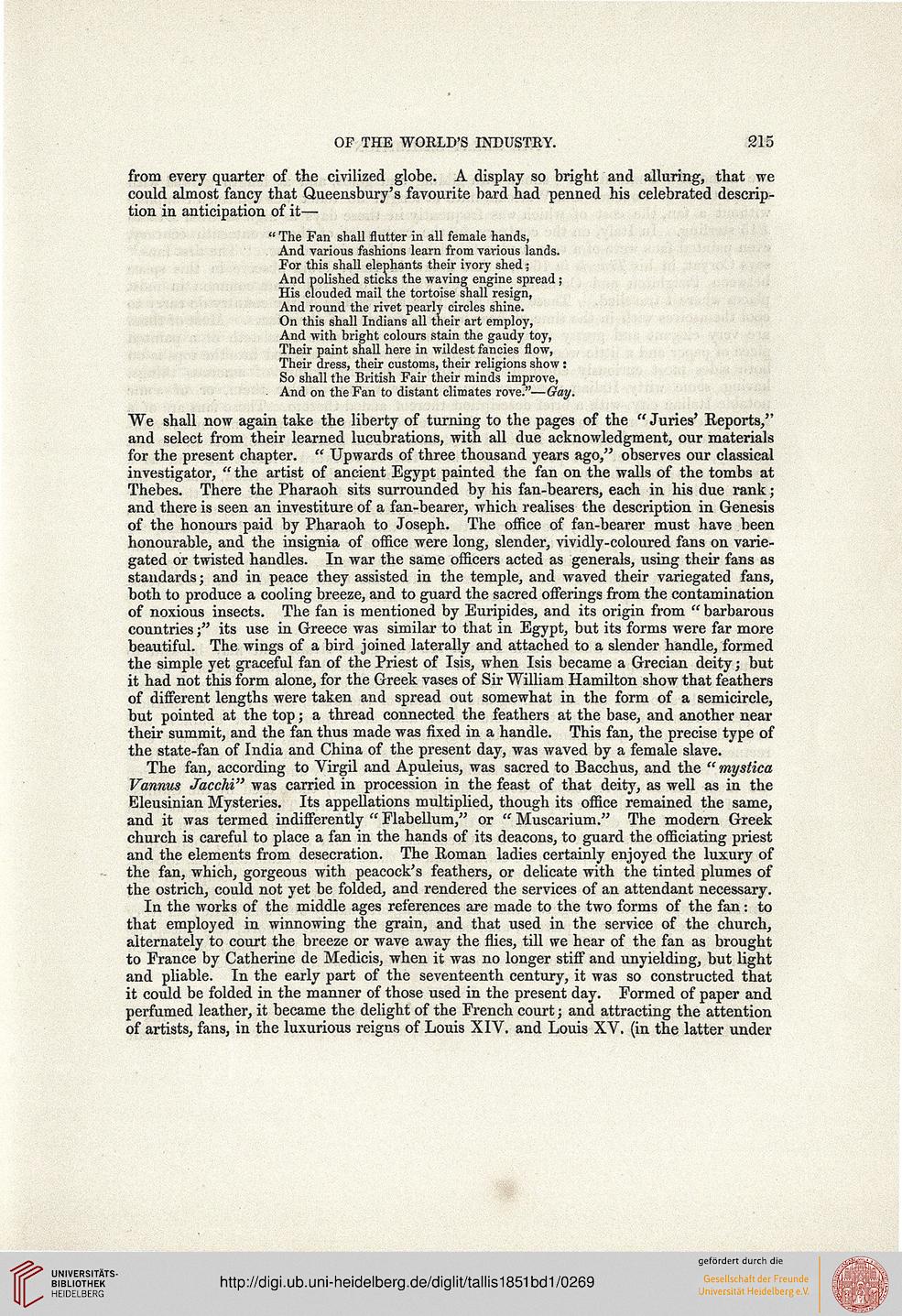 Information about OCR text
OF THE WORLD'S INDUSTRY. 215

from every quarter of the civilized globe. A display so bright and alluring, that we
could almost fancy that Queensbury's favourite bard had penned his celebrated descrip-
tion in anticipation of it—

" The Fan shall flutter in all female hands,
And various fashions learn from various lands.
For this shall elephants their ivory shed;
And polished sticks the waving engine spread ;
His clouded mail the tortoise shall resign,
And round the rivet pearly circles shine.
On this shall Indians all their art employ,
And ■with bright colours stain the gaudy toy,
Their paint shall here in wildest fancies flow,
Their dress, their customs, their religions show:
So shall the British Fair their minds improve,
And on the Fan to distant climates rove."—Gay.

We shall now again take the liberty of turning to the pages of the "■ Juries' Reports,''
and select from their learned lucubrations, with all due acknowledgment, our materials
for the present chapter. " Upwards of three thousand years ago," observes our classical
investigator, " the artist of ancient Egypt painted the fan on the walls of the tombs at
Thebes. There the Pharaoh sits surrounded by his fan-bearers, each in his due rank j
and there is seen an investiture of a fan-bearer, which realises the description in Genesis
of the honours paid by Pharaoh to Joseph. The office of fan-bearer must have been
honourable, and the insignia of office were long, slender, vividly-coloured fans on varie-
gated or twisted handles. In war the same officers acted as generals, using their fans as
standards; and in peace they assisted in the temple, and waved their variegated fans,
both to produce a cooling breeze, and to guard the sacred offerings from the contamination
of noxious insects. The fan is mentioned by Euripides, and its origin from " barbarous
countries;" its use in Greece was similar to that in Egypt, but its forms were far more
beautiful. The wings of a bird joined laterally and attached to a slender handle, formed
the simple yet graceful fan of the Priest of Isis, when Isis became a Grecian deity; but
it had not this form alone, for the Greek vases of Sir William Hamilton show that feathers
of different lengths were taken and spread out somewhat in the form of a semicircle,
but pointed at the top; a thread connected the feathers at the base, and another near
their summit, and the fan thus made was fixed in a handle. This fan, the precise type of
the state-fan of India and China of the present day, was waved by a female slave.

The fan, according to Virgil and Apuleius, was sacred to Bacchus, and the " mystica
Vannus Jacchi" was carried in procession in the feast of that deity, as well as in the
Eleusinian Mysteries. Its appellations multiplied, though its office remained the same,
and it was termed indifferently " Flabellum," or " Muscarium." The modern Greek
church is careful to place a fan in the hands of its deacons, to guard the officiating priest
and the elements from desecration. The Roman ladies certainly enjoyed the luxury of
the fan, which, gorgeous with peacock's feathers, or delicate with the tinted plumes of
the ostrich, could not yet be folded, and rendered the services of an attendant necessary.

In the works of the middle ages references are made to the two forms of the fan: to
that employed in winnowing the grain, and that used in the service of the church,
alternately to court the breeze or wave away the flies, till we hear of the fan as brought
to France by Catherine de Medicis, when it was no longer stiff and unyielding, but light
and pliable. In the early part of the seventeenth century, it was so constructed that
it could be folded in the manner of those used in the present day. Formed of paper and
perfumed leather, it became the delight of the French court j and attracting the attention
of artists, fans, in the luxurious reigns of Louis XIV. and Louis XV. (in the latter under