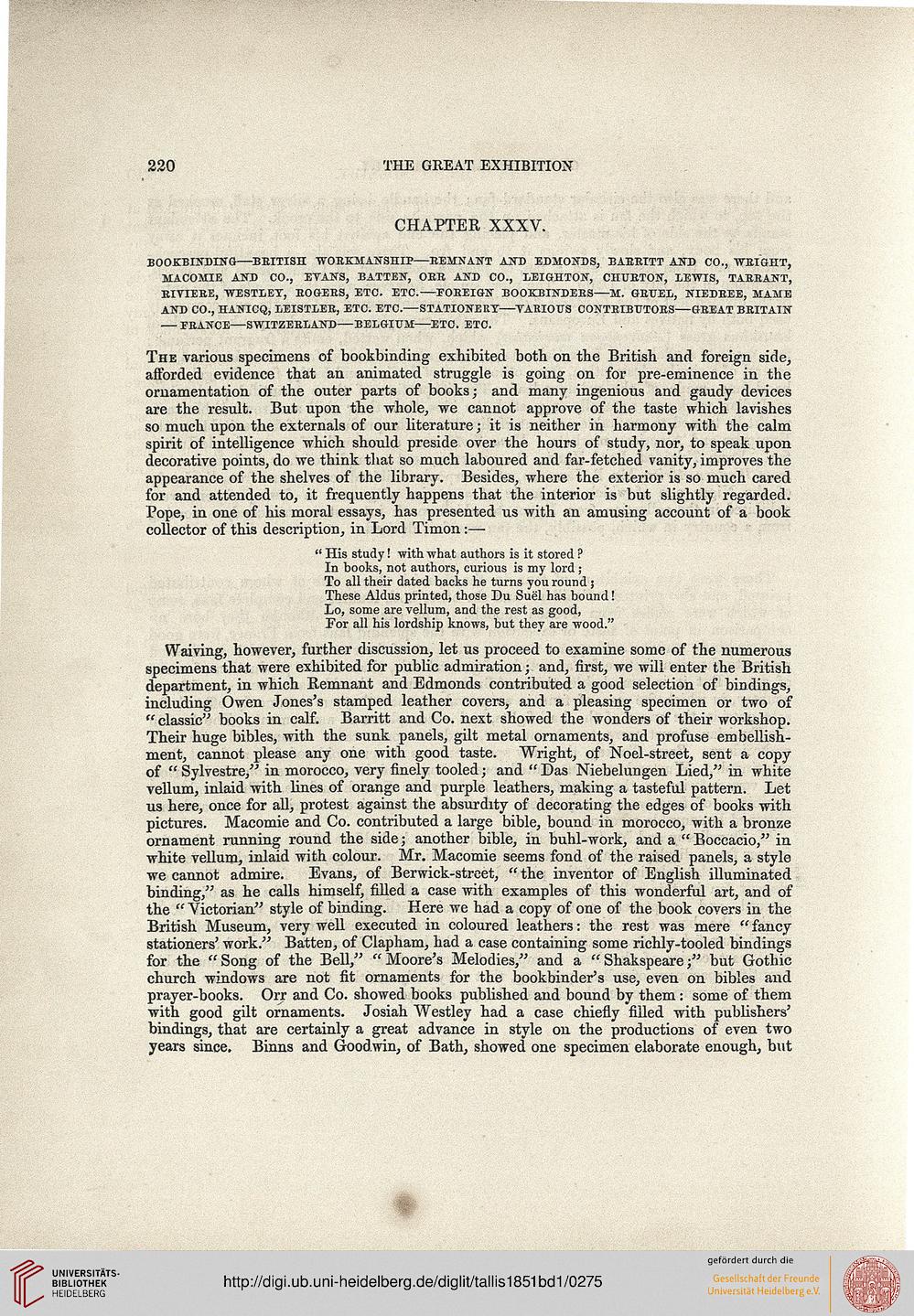 The various specimens of bookbinding exhibited both, on the British and foreign side,
afforded evidence that an animated struggle is going on for pre-eminence in the
ornamentation of the outer parts of books; and many ingenious and gaudy devices
are the result. But upon the whole, we cannot approve of the taste which lavishes
so much upon the externals of our literature; it is neither in harmony with the calm
spirit of intelligence which should preside over the hours of study, nor, to speak upon
decorative points, do we think that so much laboured and far-fetched vanity, improves the
appearance of the shelves of the library. Besides, where the exterior is so much cared
for and attended to, it frequently happens that the interior is but slightly regarded.
Pope, in one of his moral essays, has presented us with an amusing account of a book
collector of this description, in Lord Timon:—

" His study! with what authors is it stored P
In books, not authors, curious is my lord ;
To all their dated backs he turns you round ;
These Aldus printed, those Du Sue! has bound!
"Lo, some are vellum, and the rest as good,
Eor all his lordship knows, but they are wood."

Waiving, however, further discussion, let us proceed to examine some of the numerous
specimens that were exhibited for public admiration; and, first, we will enter the British
department, in which Remnant and Edmonds contributed a good selection of bindings,
including Owen Jones's stamped leather covers, and a pleasing specimen or two of
" classic" books in calf. Barritt and Co. next showed the wonders of their workshop.
Their huge bibles, with the sunk panels, gilt metal ornaments, and profuse embellish-
ment, cannot please any one with good taste. Wright, of Noel-street, sent a copy
of " Sylvestre," in morocco, very finely tooled; and " Das Niebelungen Lied," in white
vellum, inlaid with lines of orange and purple leathers, making a tasteful pattern. Let
us here, once for all, protest against the absurdity of decorating the edges of books with
pictures. Macomie and Co. contributed a large bible, bound in morocco, with a bronze
ornament running round the side; another bible, in buhl-work, and a " Boccacio," in
white vellum, inlaid with colour. Mr. Macomie seems fond of the raised panels, a style
we cannot admire. Evans, of Berwick-street, "the inventor of English illuminated
binding," as he calls himself, filled a case with examples of this wonderful art, and of
the " Victorian" style of binding. Here we had a copy of one of the book covers in the
British Museum, very well executed in coloured leathers: the rest was mere "fancy
stationers' work." Batten, of Clapham, had a case containing some richly-tooled bindings
for the "Song of the Bell," "Moore's Melodies," and a "Shakspeare;" but Gothic
church windows are not fit ornaments for the bookbinder's use, even on bibles and
prayer-books. Orr and Co. showed books published and bound by them: some of them
with good gilt ornaments. Josiah Westley had a case chiefly filled with publishers'
bindings, that are certainly a great advance in style on the productions of even two
years since. Binns and Goodwin, of Bath, showed one specimen elaborate enough, but