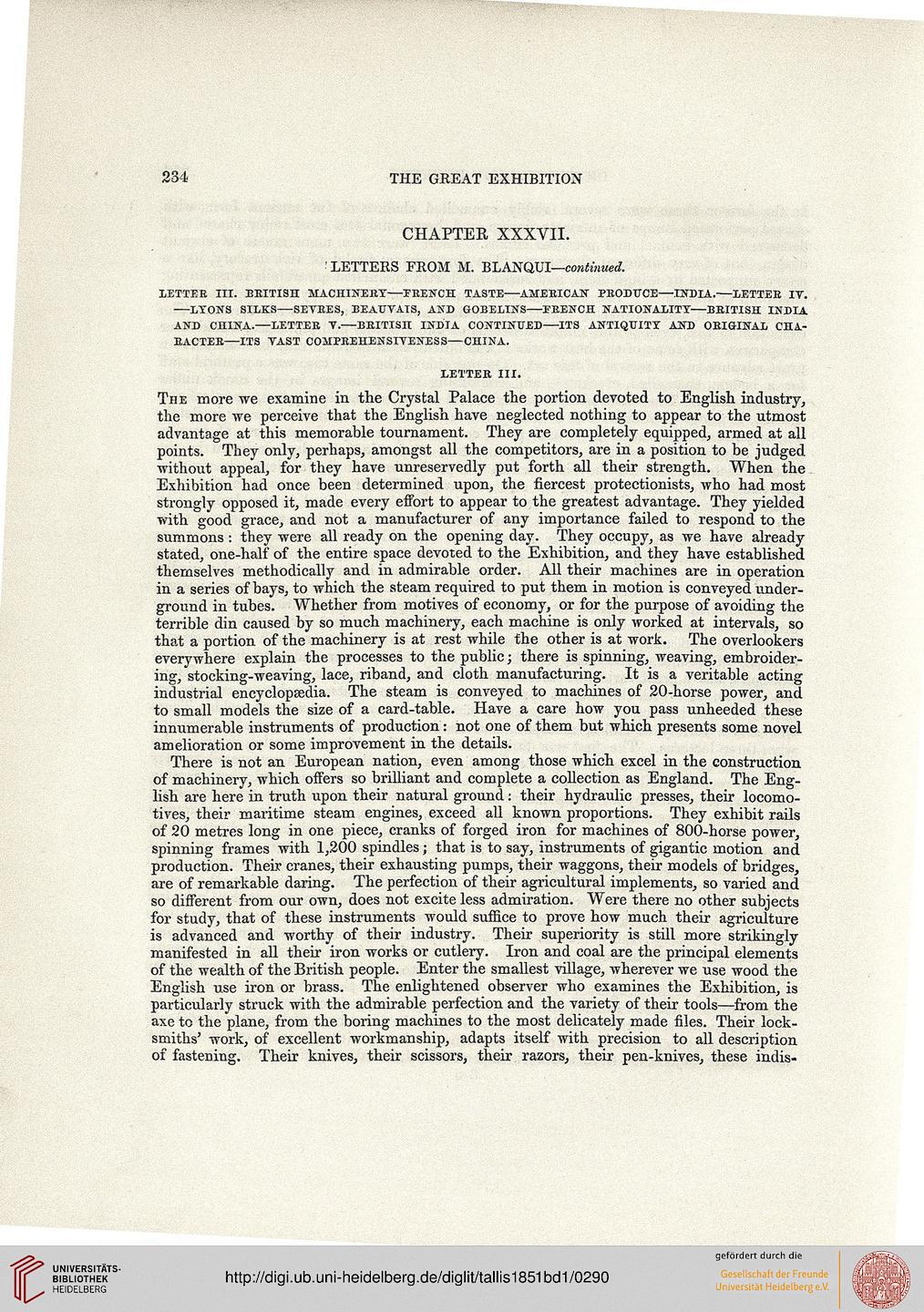 The more we examine in the Crystal Palace the portion devoted to English industry,
the more we perceive that the English have neglected nothing to appear to the utmost
advantage at this memorable tournament. They are completely equipped, armed at all
points. They only, perhaps, amongst all the competitors, are in a position to be judged
without appeal, for they have unreservedly put forth all their strength. When the
Exhibition had once been determined upon, the fiercest protectionists, who had most
strongly opposed it, made every effort to appear to the greatest advantage. They yielded
with good grace, and not a manufacturer of any importance failed to respond to the
summons : they were all ready on the opening day. They occupy, as we have already
stated, one-half of the entire space devoted to the Exhibition, and they have established
themselves methodically and in admirable order. All their machines are in operation
in a series of bays, to which the steam required to put them in motion is conveyed under-
ground in tubes. Whether from motives of economy, or for the purpose of avoiding the
terrible din caused by so much machinery, each machine is only worked at intervals, so
that a portion of the machinery is at rest while the other is at work. The overlookers
everywhere explain the processes to the public; there is spinning, weaving, embroider-
ing, stocking-weaving, lace, riband, and cloth manufacturing. It is a veritable acting
industrial encyclopedia. The steam is conveyed to machines of 20-horse power, and
to small models the size of a card-table. Have a care how you pass unheeded these
innumerable instruments of production: not one of them but which presents some novel
amelioration or some improvement in the details.

There is not an European nation, even among those which excel in the construction
of machinery, which offers so brilliant and complete a collection as England. The Eng-
lish are here in truth upon their natural ground: their hydraulic presses, their locomo-
tives, their maritime steam engines, exceed all known proportions. They exhibit rails
of 20 metres long in one piece, cranks of forged iron for machines of 800-horse power,
spinning frames with 1,200 spindles; that is to say, instruments of gigantic motion and
production. Their cranes, their exhausting pumps, their waggons, their models of bridges,
are of remarkable daring. The perfection of their agricultural implements, so varied and
so different from our own, does not excite less admiration. Were there no other subjects
for study, that of these instruments would suffice to prove how much their agriculture
is advanced and worthy of their industry. Their superiority is still more strikingly
manifested in all their iron works or cutlery. Iron and coal are the principal elements
of the wealth of the British people. Enter the smallest village, wherever we use wood the
English use iron or brass. The enlightened observer who examines the Exhibition, is
particularly struck with the admirable perfection and the variety of their tools—from the
axe to the plane, from the boring machines to the most delicately made files. Their lock-
smiths' work, of excellent workmanship, adapts itself with precision to all description
of fastening. Their knives, their scissors, their razors, their pen-knives, these indis-