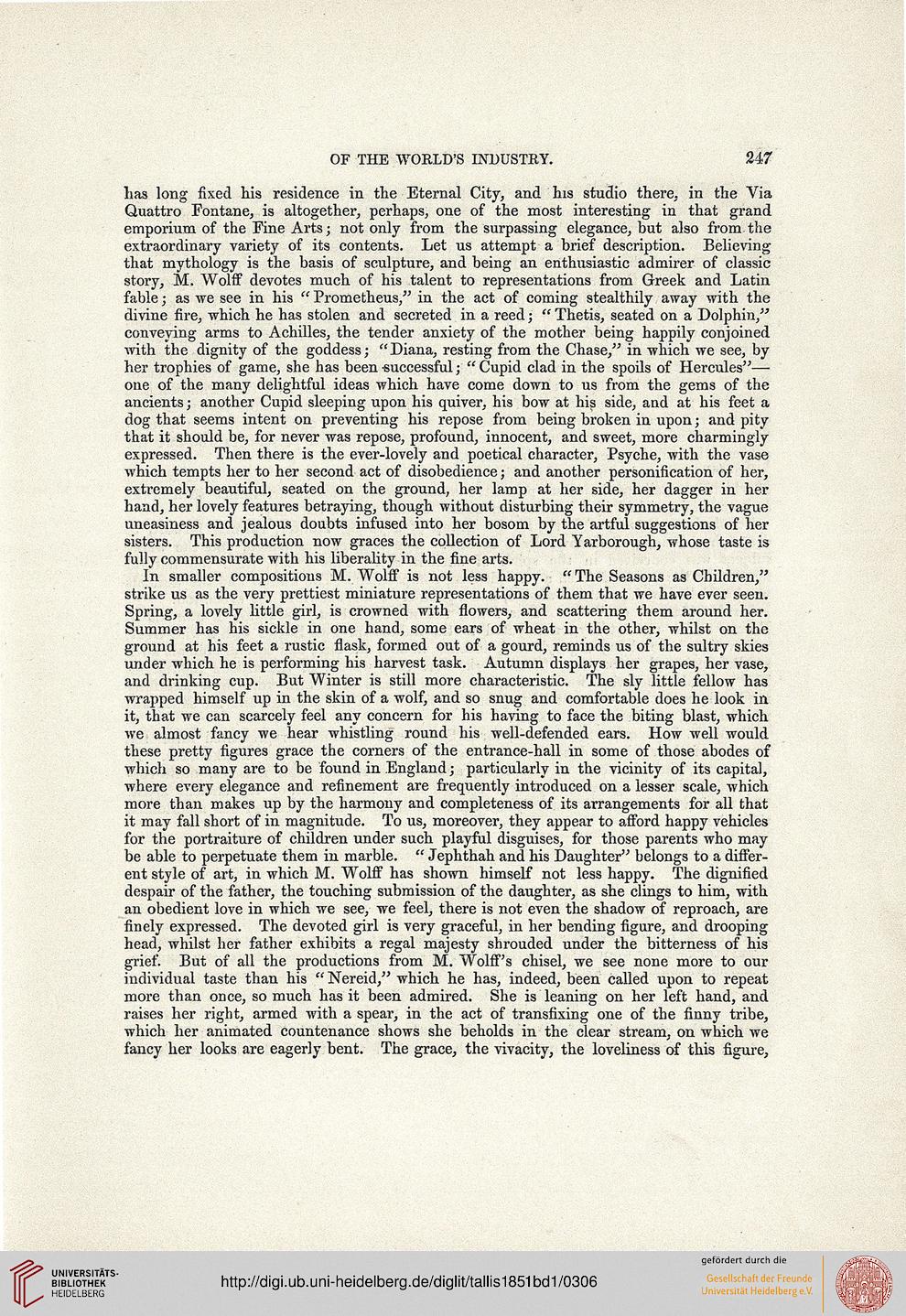 Information about OCR text
OF THE "WORLD'S INDUSTRY. 24,7

has long fixed his residence in the Eternal City, and hxs studio there, in the Via
Quattro Fontane, is altogether, perhaps, one of the most interesting in that grand
emporium of the Fine Arts; not only from the surpassing elegance, but also from the
extraordinary variety of its contents. Let us attempt a brief description. Believing
that mythology is the basis of sculpture, and being an enthusiastic admirer of classic
story, M. Wolff devotes much of his talent to representations from Greek and Latin
fable; as we see in his " Prometheus," in the act of coming stealthily away with the
divine fire, which he has stolen and secreted in a reed; " Thetis, seated on a Dolphin,"
conveying arms to Achilles, the tender anxiety of the mother being happily conjoined
with the dignity of the goddess; " Diana, resting from the Chase," in which we see, by
her trophies of game, she has been -successful; " Cupid clad in the spoils of Hercules"—•
one of the many delightful ideas which have come down to us from the gems of the
ancients; another Cupid sleeping upon his quiver, his bow at his side, and at his feet a
dog that seems intent on preventing his repose from being broken in upon; and pity
that it should be, for never was repose, profound, innocent, and sweet, more charmingly
expressed. Then there is the ever-lovely and poetical character, Psyche, with the vase
which tempts her to her second act of disobedience; and another personification of her,
extremely beautiful, seated on the ground, her lamp at her side, her dagger in her
hand, her lovely features betraying, though without disturbing their symmetry, the vague
uneasiness and jealous doubts infused into her bosom by the artful suggestions of her
sisters. This production now graces the collection of Lord Yarborough, whose taste is
fully commensurate with his liberality in the fine arts.

In smaller compositions M. "Wolff is not less happy. " The Seasons as Children,"
strike us as the very prettiest miniature representations of them that we have ever seen.
Spring, a lovely little girl, is crowned with flowers, and scattering them around her.
Summer has his sickle in one hand, some ears of wheat in the other, whilst on the
ground at his feet a rustic flask, formed out of a gourd, reminds us of the sultry skies
under which he is performing his harvest task. Autumn displays her grapes, her vase,
and drinking cup. But Winter is still more characteristic. The sly little fellow has
wrapped himself up in the skin of a wolf, and so snug and comfortable does he look in
it, that we can scarcely feel any concern for his having to face the biting blast, which
we almost fancy we hear whistling round his well-defended ears. How well would
these pretty figures grace the corners of the entrance-hall in some of those abodes of
which so many are to be found in England; particularly in the vicinity of its capital,
where every elegance and refinement are frequently introduced on a lesser scale, which
more than makes up by the harmony and completeness of its arrangements for all that
it may fall short of in magnitude. To us, moreover, they appear to afford happy vehicles
for the portraiture of children under such playful disguises, for those parents who may
be able to perpetuate them in marble. " Jephthah and his Daughter" belongs to a differ-
ent style of art, in which M. Wolff has shown himself not less happy. The dignified
despair of the father, the touching submission of the daughter, as she clings to him, with
an obedient love in which we see, we feel, there is not even the shadow of reproach, are
finely expressed. The devoted girl is very graceful, in her bending figure, and drooping
head, whilst her father exhibits a regal majesty shrouded under the bitterness of his
grief. But of all the productions from M. Wolff's chisel, we see none more to our
individual taste than his " Nereid," which he has, indeed, been called upon to repeat
more than once, so much has it been admired. She is leaning on her left hand, and
raises her right, armed with a spear, in the act of transfixing one of the finny tribe,
which her animated countenance shows she beholds in the clear stream, on wbich we
fancy her looks are eagerly bent. The grace, the vivacity, the loveliness of this figure,