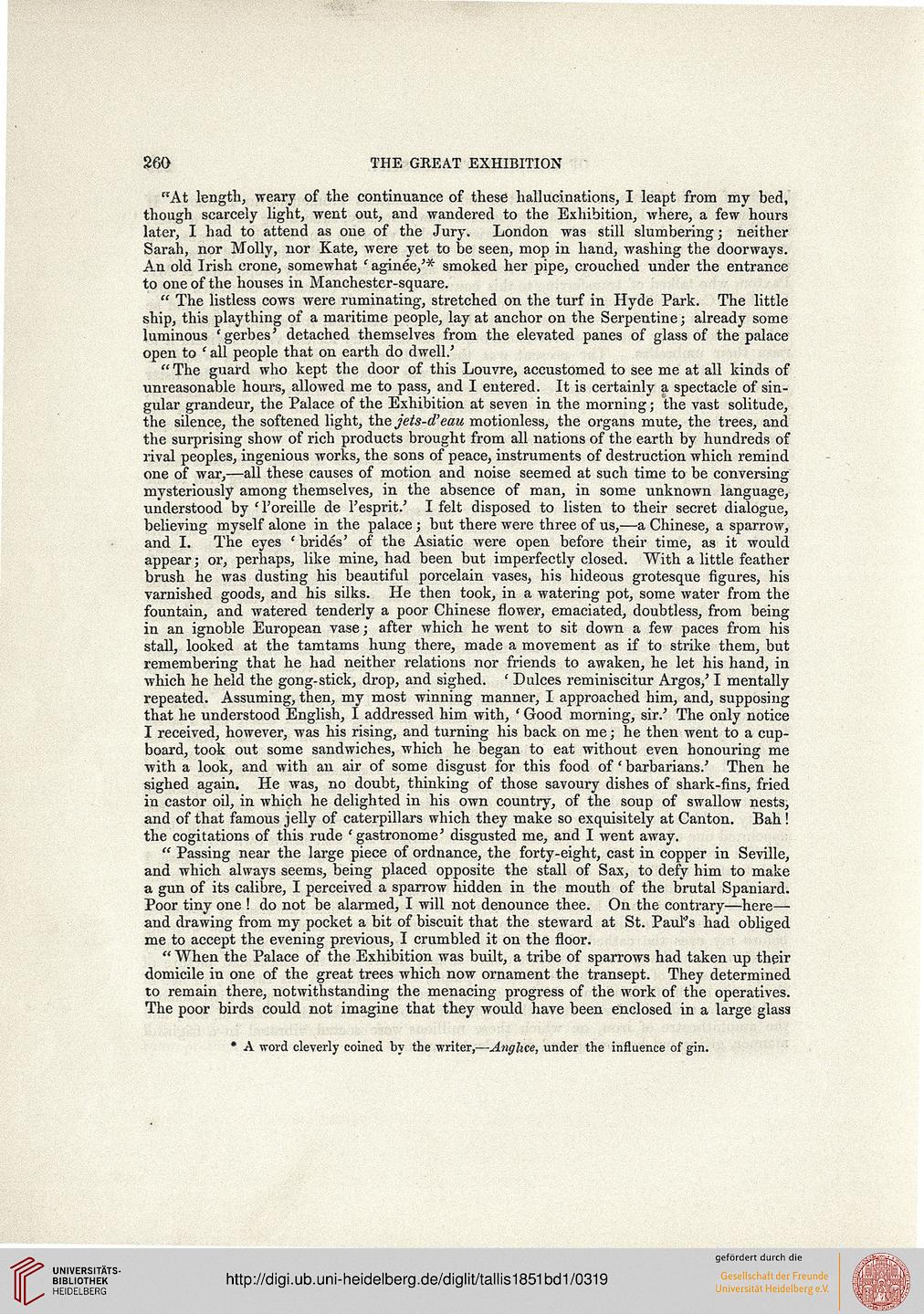 "At length, weary of the continuance of these hallucinations, I leapt from my bed,
though scarcely light, went out, and wandered to the Exhibition, where, a few hours
later, I had to attend as one of the Jury. London was still slumbering; neither
Sarah, nor Molly, nor Kate, were yet to be seen, mop in hand, washing the doorways.
An old Irish crone, somewhat ' aginee,'* smoked her pipe, crouched under the entrance
to one of the houses in Manchester-square.

" The listless cows were ruminating, stretched on the turf in Hyde Park. The little
ship, this plaything of a maritime people, lay at anchor on the Serpentine; already some
luminous 'gerbes' detached themselves from the elevated panes of glass of the palace
open to ' all people that on earth do dwell.'

"The guard who kept the door of this Louvre, accustomed to see me at all kinds of
unreasonable hours, allowed me to pass, and I entered. It is certainly a spectacle of sin-
gular grandeur, the Palace of the Exhibition at seven in the morning; the vast solitude,
the silence, the softened light, the jets-d'eau motionless, the organs mute, the trees, and
the surprising show of rich products brought from all nations of the earth by hundreds of
rival peoples, ingenious works, the sons of peace, instruments of destruction which remind
one of war,—all these causes of motion and noise seemed at such time to be conversing
mysteriously among themselves, in the absence of man, in some unknown language,
understood by Toreille de 1'esprit/ I felt disposed to listen to their secret dialogue,
believing myself alone in the palace; but there were three of us,—a Chinese, a sparrow,
and I. The eyes 'brides' of the Asiatic were open before their time, as it would
appear; or, perhaps, like mine, had been but imperfectly closed. "With a little feather
brush he was dusting his beautiful porcelain vases, his hideous grotesque figures, his
varnished goods, and his silks. He then took, in a watering pot, some water from the
fountain, and watered tenderly a poor Chinese flower, emaciated, doubtless, from being
in an ignoble European vase; after which he went to sit down a few paces from his
stall, looked at the tamtams hung there, made a movement as if to strike them, but
remembering that he had neither relations nor friends to awaken, he let his hand, in
which he held the gong-stick, drop, and sighed. 'Dulces reminiscitur Argos/ I mentally
repeated. Assuming, then, my most winning manner, I approached him, and, supposing
that he understood English, I addressed him with, '■ Good morning, sir/ The only notice
I received, however, was his rising, and turning his back on me; he then went to a cup-
board, took out some sandwiches, which he began to eat without even honouring me
with a look, and with an air of some disgust for this food of' barbarians/ Then he
sighed again. He was, no doubt, thinking of those savoury dishes of shark-fins, fried
in castor oil, in which he delighted in his own country, of the soup of swallow nests,
and of that famous jelly of caterpillars which they make so exquisitely at Canton. Bah!
the cogitations of this rude 'gastronome5 disgusted me, and I went away.

" Passing near the large piece of ordnance, the forty-eight, cast in copper in Seville,
and which always seems, being placed opposite the stall of Sax, to defy him to make
a gun of its calibre, I perceived a sparrow hidden in the mouth of the brutal Spaniard.
Poor tiny one ! do not be alarmed, I will not denounce thee. On the contrary—here—
and drawing from my pocket a bit of biscuit that the steward at St. Paul's had obliged
me to accept the evening previous, I crumbled it on the floor.

" "When the Palace of the Exhibition was built, a tribe of sparrows had taken up their
domicile in one of the great trees which now ornament the transept. They determined
to remain there, notwithstanding the menacing progress of the work of the operatives.
The poor birds could not imagine that they would have been enclosed in a large glass

* A word cleverly coined by the writer,—Anglice, under the influence of gin.