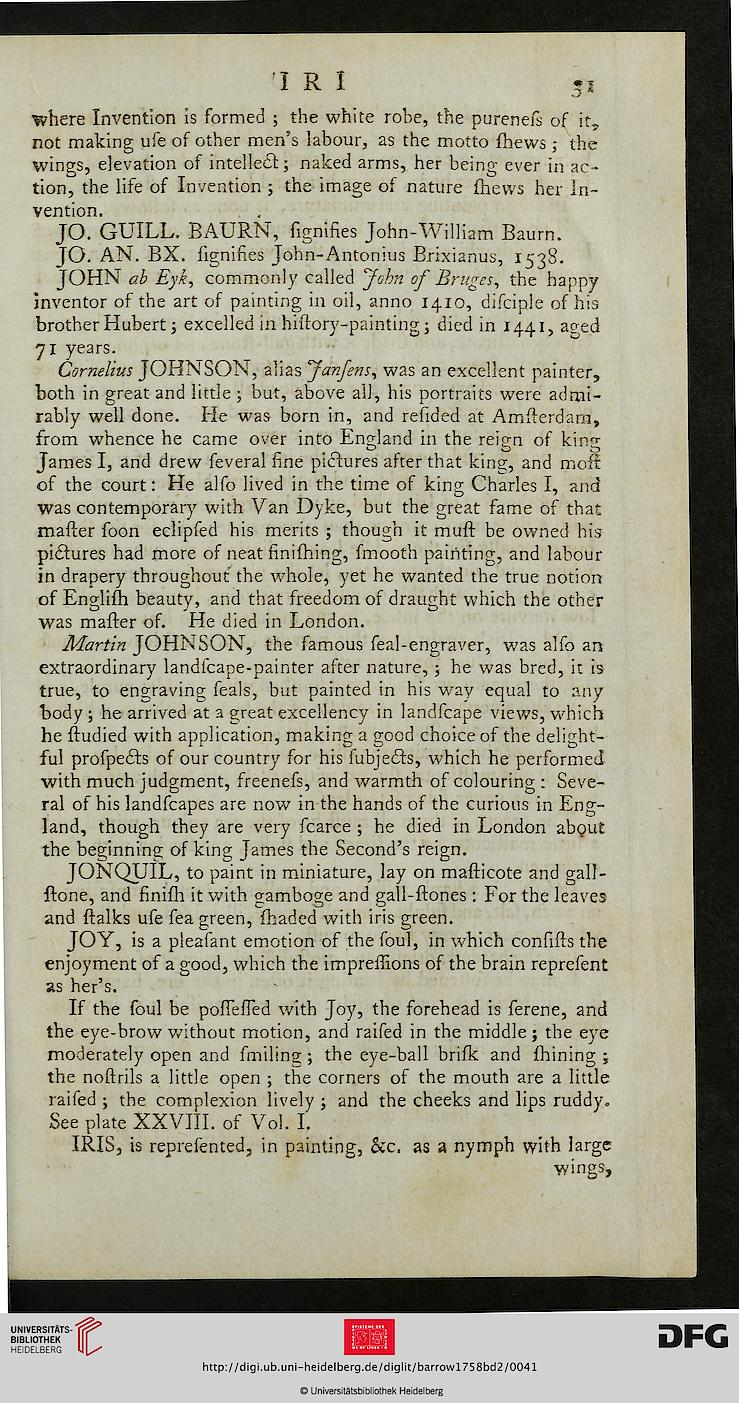 Information about OCR text
I R I fi

where Invention is formed ; the white robe, the purenefs of it,
not making ufe of other men's labour, as the motto fhews; the
wings, elevation of intellect; naked arms, her being ever in ac-
tion, the life of Invention ; the image of nature (hews her In-
vention.

JOHN ab Ey.k, commonly called John of Bruges, the happy
inventor of the art of painting in oil, anno 1410, difciple of his
brother Hubert j excelled in hiftory-painting; died in 1441, aoed
71 years.

Cornelius JOHNSON, alias Janfens, was an excellent painter,
both in great and little ; but, above all, his portraits were admi-
rably well done. He was born in, and refided at Amfterdarn,
from whence he came over into England in the reign of king
James I, and drew feveral fine pictures after that king, and moft
of the court: He alfo lived in the time of king Charles I, and
was contemporary with Van Dyke, but the great fame of that
mafter foon eclipfed his merits ; though it muff, be owned his
pictures had more of neat finifhing, fmooth painting, and labour
in drapery throughout the whole, yet he wanted the true notion
of Englifh beauty, and that freedom of draught which the other
was mafter of. He died in London.

Martin JOHNSON, the famous feal-engraver, was alfo an
extraordinary landfcape-painter after nature, ; he was bred, it is
true, to engraving feals, but painted in his way equal to any
body ; he arrived at a great excellency in landfcape views, which
he ftudied with application, making a good choice of the delight-
ful profpefts of our country for his fubjeits, which he performed
with much judgment, freenefs, and warmth of colouring : Seve-
ral of his landfcapes are now in the hands of the curious in Eng-
land, though they are very fcarce ; he died in London about
the beginning of king James the Second's reign.

JONQUIL, to paint in miniature, lay on mafticote and gall-
ftone, and finifh it with gamboge and gall-ftones: For the leaves
and ff.alks ufe fea green, fhaded with iris green.

JOY, is a pleafant emotion of the foul, in which confifts the
enjoyment of a good, which the impreffions of the brain reprefent
as her's.

If the foul be pofTeffed with Joy, the forehead is ferene, and
the eye-brow without motion, and raifed in the middle; the eye
moderately open and fmilins:; the eye-ball brifk and mining ;
the noftrils a little open ; the corners of the mouth are a little
raifed ; the complexion lively ; and the cheeks and lips ruddy.
See plate XXVIII. of Vol. I.

IRIS, is reprefented, in painting, Sec. as a nymph with large