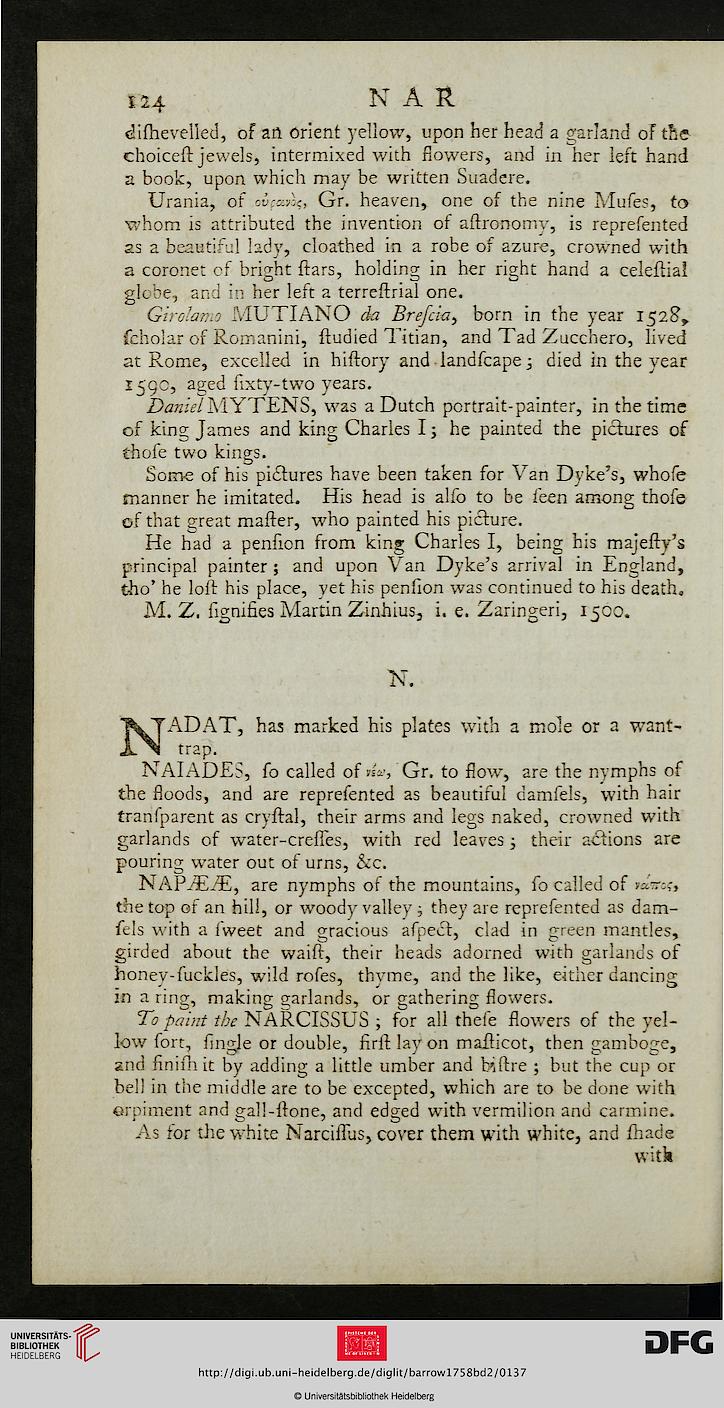 Information about OCR text
i24 N A R

diftievelled, of an orient yellow, upon her head a garland of the
choiceft jewels, intermixed with flowers, and in her left hand
a book, upon which may be written Suadere.

Urania, of wpcwa?, Gr. heaven, one of the nine Mufes, to
whom is attributed the invention of aftronomy, is reprefented
zs a beautiful lady, cloathed in a robe of azure, crowned with
a coronet cf bright flars, holding in her right hand a celeftial
glebe, and in her left a terreftrial one.

Z)<2«:V7MYTENS, was a Dutch portrait-painter, in the time
of king James and king Charles I j he painted the pictures of
thole two kings.

Some of his pictures have been taken for Van Dyke's, whofe
manner he imitated. His head is alio to be i'een among thofe
of that great maffer, who painted his picture.

He had a penfion from king Charles I, being his majefty's
principal painter ; and upon Van Dyke's arrival in England,
tho' he loll his place, vet his penfion was continued to his death,

j^JADAT, has marked his plates with a mole or a want-

NAIADES, fo called of Gr. to flow, are the nymphs of
the floods, and are reprefented as beautiful damfels, with hair
tranfparent as cryftal, their arms and legs naked, crowned with
garlands of water-crefles, with red leaves; their actions are
pouring water out of urns, &:c.

NAPTLE, are nymphs of the mountains, fo called of iMfefe
the top of an hill, or woody valley j they are reprefented as dam-
fels with a lweet and gracious afpect, clad in green mantles,
girded about the waift, their heads adorned with garlands of
honev-fuckles, wild rofes, thyme, and the like, either dancing
in a ring, making garlands, or gathering flowers.

To paint the NARCISSUS ; for all thefe flowers of the yel-
low fort, fingje or double, fidr. lay on malticot, then gamboge,
and finifh it by adding a little umber and biftre ; but the cup or
bell in the middle are to be excepted, which are to be done with
©rpiment and gall-ltone, and edged with vermilion and carmine.

As for the white NarcilTus, cover them with white, and made