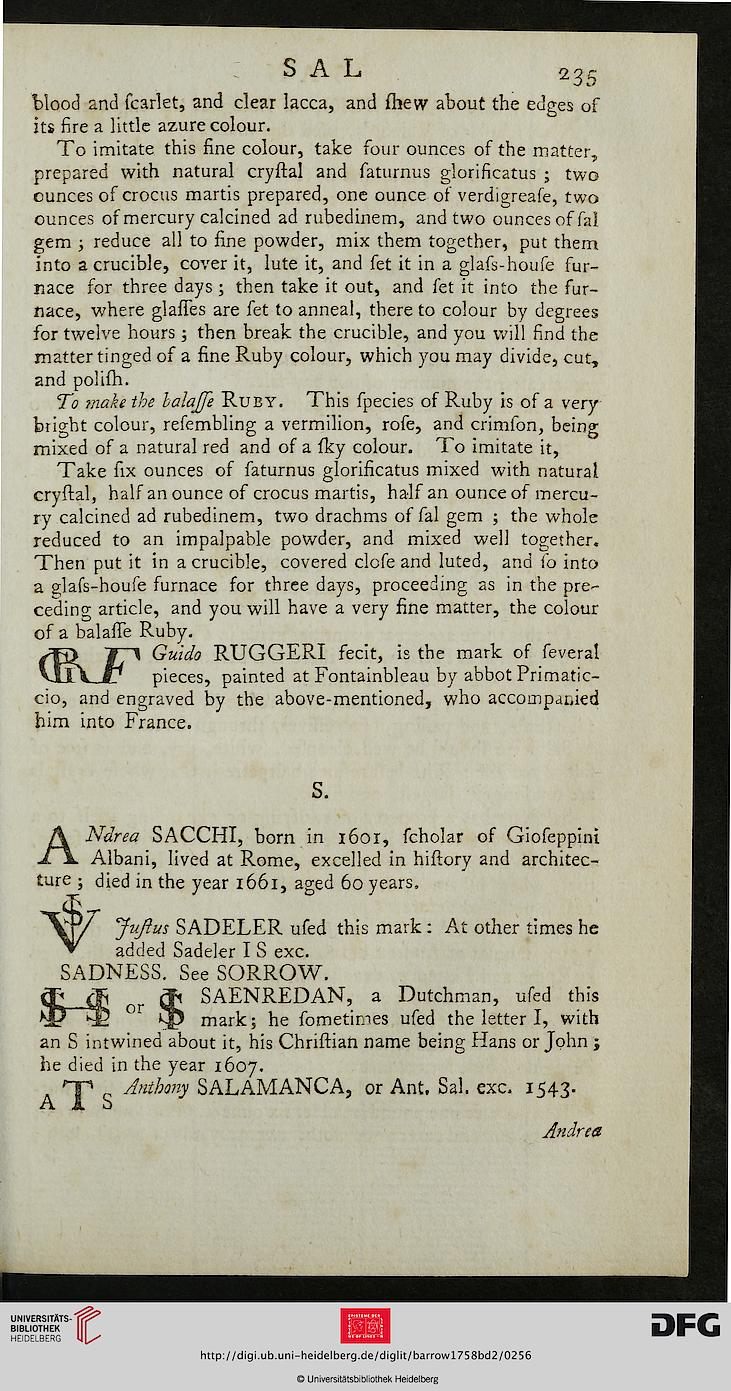 blood and fcarlet, and clear lacca, and (hew about the edges of
its fire a little azure colour.

To imitate this fine colour, take four ounces of the matter,
prepared with natural cryftal and faturnus glorificatus ; two
ounces of crocus martis prepared, one ounce of verdigreafe, two
ounces of mercury calcined ad rubedinem, and two ounces offal
gem ; reduce all to fine powder, mix them together, put them
into a crucible, cover it, lute it, and fet it in a glafs-houfe fur-
nace for three days ; then take it out, and fet it into the fur-
nace, where glafies are fet to anneal, there to colour by degrees
for twelve hours; then break the crucible, and you will find the
matter tinged of a fine Ruby colour, which you may divide, cut,
and polifh.

To make the lalajfe Ruby. This fpecies of Ruby is of a very
bright colour, refembling a vermilion, rofe, and crimfon, being
mixed of a natural red and of a fky colour. To imitate it,

Take fix ounces of faturnus glorificatus mixed with natural
cryftal, half an ounce of crocus martis, half an ounce of mercu-
ry calcined ad rubedinem, two drachms of fal gem ; the whole
reduced to an impalpable powder, and mixed well together.
Then put it in a crucible, covered clofe and luted, and fo into
a glafs-houfe furnace for three days, proceeding as in the pre-
ceding article, and you will have a very fine matter, the colour
of a balaffe Ruby.

>p> TT^y Guido RUGGEPvI fecit, is the mark of feveral
VJulVjI/ pieces, painted at Fontainbleau by abbot Primatic-
cio, and engraved by the above-mentioned, who accompanied
him into France.

ANdrea SACCHI, born in 1601, fcholar of Giofeppini
Albani, lived at Rome, excelled in hiftory and architec-
ture ; died in the year 1661, aged 60 years,

SAENREDAN, a Dutchman, ufed this
mark; he fometinies ufed the letter I, with
an S intwined about it, his Chriftian name being Hans or John ;
he died in the year 1607.