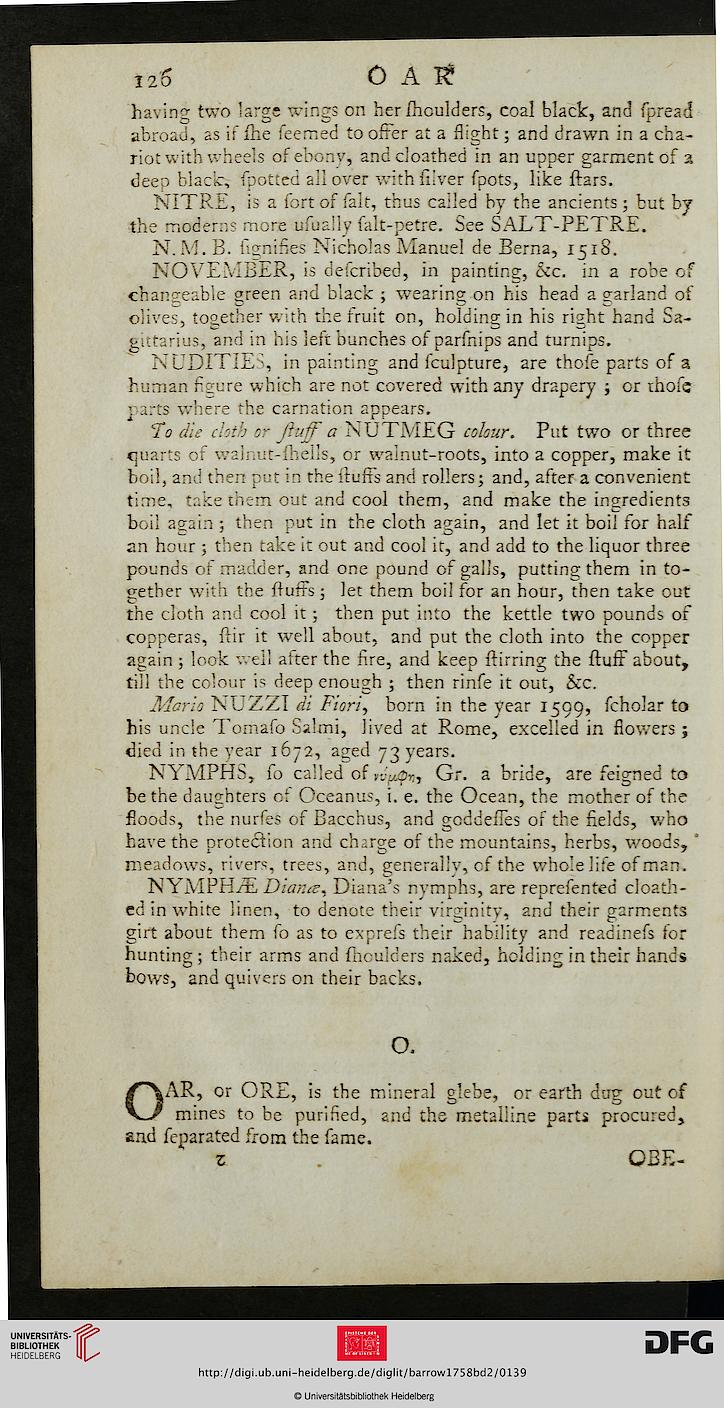 having two large wings on her moulders, coal black, and fpread
abroad, as if fhe feerned to offer at a flight; and drawn in a cha-
riot with wheels ofebonv, andcloathed in an upper garment of a
deep black:, fpotted all over with fiiver fpots, like ftars.

NITRE, IS a fort of fait, thus cailed by the ancients ; but by
the moderns more ufually falt-petre. See SALT-PETRE.

NOVEMBER, is defcribed, in painting, tkc. in a robe of
changeable green and black ; wearing on his head a garland of
olives, together with the fruit on, holding in his right hand Sa-
gittarius, and in his left bunches of parfnips and turnips.

NUDITIES, in painting and fculpture, are thofe parts of a
human fzure which are not covered with any drapery ; or thofe
parts where the carnation appears.

To die cloth or fluff a NUTMEG colour. Put two or three
quarts of walmif-foelfe, or walnut-roots, into a copper, make it
boil, and then put in the Huffs and rollers; and, after a convenient
time, take them out and cool them, and make the ingredients
boil again ; then put in the cloth again, and let it boil for half
an hour ; then take it out and cool it, and add to the liquor three
pounds of madder, and one pound of gal's, putting them in to-
gether with the fluffs; let them boil for an hour, then take out
the cloth and cool it; then put into the kettle two pounds of
copperas, ftir it well about, and put the cloth into the copper
again ; look we}] alter the fire, and keep ftirring the fluff about,
till the colour is deep enough ; then rinfe it out, &c.

NYMPHS, fo called of rJ^upr,, Gr. a bride, are feigned to
be the daughters of Oceanus, i. e. the Ocean, the mother of the
floods, the nurfes of Bacchus, and gcddeffes of the fields, who
have the protection and charge of the mountains, herbs, woods, '
meadows, rivers trees, and, generallv, of the whole life of man.

NYMPH^E Diarue, Diana's nymphs, are reprefented cloath-
ed in white linen, to denote their virginity, and their garments
girt about them fo as to exprefs their hability and readinefs for
hunting ; their arms and fhculcers naked, holding in their hands
bows, and quivers on their backs.

OAR, or ORE, is the mineral glebe, or earth dug out of
mines to be purified, and the metalline parts procured,
and feparated from the fame.