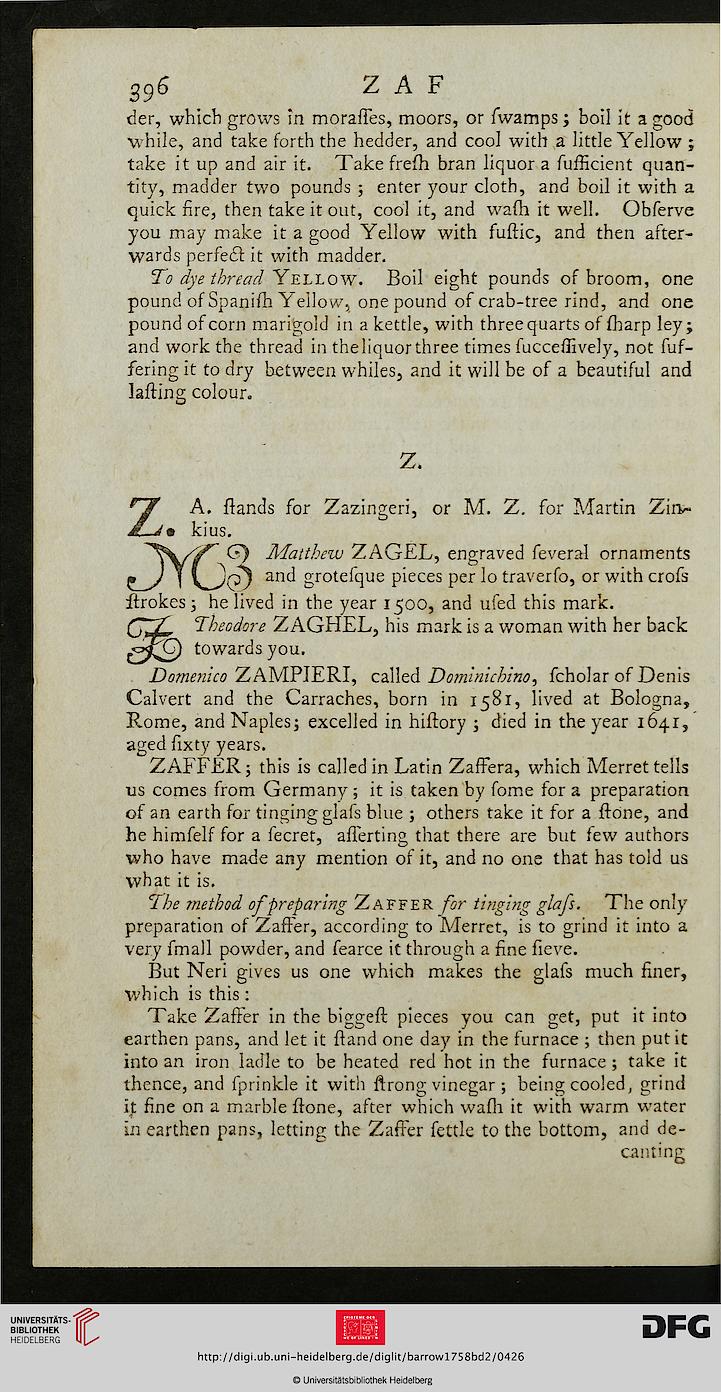 der, which grows in morafles, moors, or fwamps; boil it a good
w hile, and take forth the hedder, and cool with a little Yellow ;
take it up and air it. Take frefh bran liquor a fufficient quan-
tity, madder two pounds ; enter your cloth, and boil it with a
quick fire, then take it out, cool it, and wafh it well. Obferve
you may make it a good Yellow with fuftic, and then after-
wards perfect it with madder.

To dye threaaf Yellow. Boil eight pounds of broom, one
pound of Spanifh Y ellow, one pound of crab-tree rind, and one
pound of corn marigold in a kettle, with three quarts of (harp ley;
and work the thread in the liquor three times fuccefiiveJy, not fuf-
fering it to dry between whiles, and it will be of a beautiful and
lafting colour.

Theodore ZAGHEL, his mark is a woman with her back
towards you.

Domenico ZAMPIERI, called Domlnichino, fcholar of Denis
Calvert and the Carraches, born in 1581, lived at Bologna,
Rome, and Naples; excelled in hiftory ; died in the year 1641,
aged fixty years.

ZAFFER; this is called in Latin ZafFera, which Merret tells
us comes from Germany; it is taken by fome for a preparation
of an earth for tinging glafs blue ; others take it for a ftone, and
he himfelf for a fecret, aflerting that there are but few authors
who have made any mention of it, and no one that has told us
what it is.

The method of preparing Zaffer for tinging glafs. The only
preparation of Zaffer, according to Merret, is to grind it into a
very fmall powder, and fearce it through a fine fieve.

But Neri gives us one which makes the glafs much finer,
which is this:

Take Zaffer in the biggeft pieces you can get, put it into
earthen pans, and let it ft and one day in the furnace ; then put it
into an iron ladle to be heated red hot in the furnace ; take it
thence, and fprinkle it with ftrono; vinegar ; being cooled, grind
it fine on a marble ftone, after which wafh it with warm water
in earthen pans, letting the Zaffer fettle to the bottom, and de-
canting