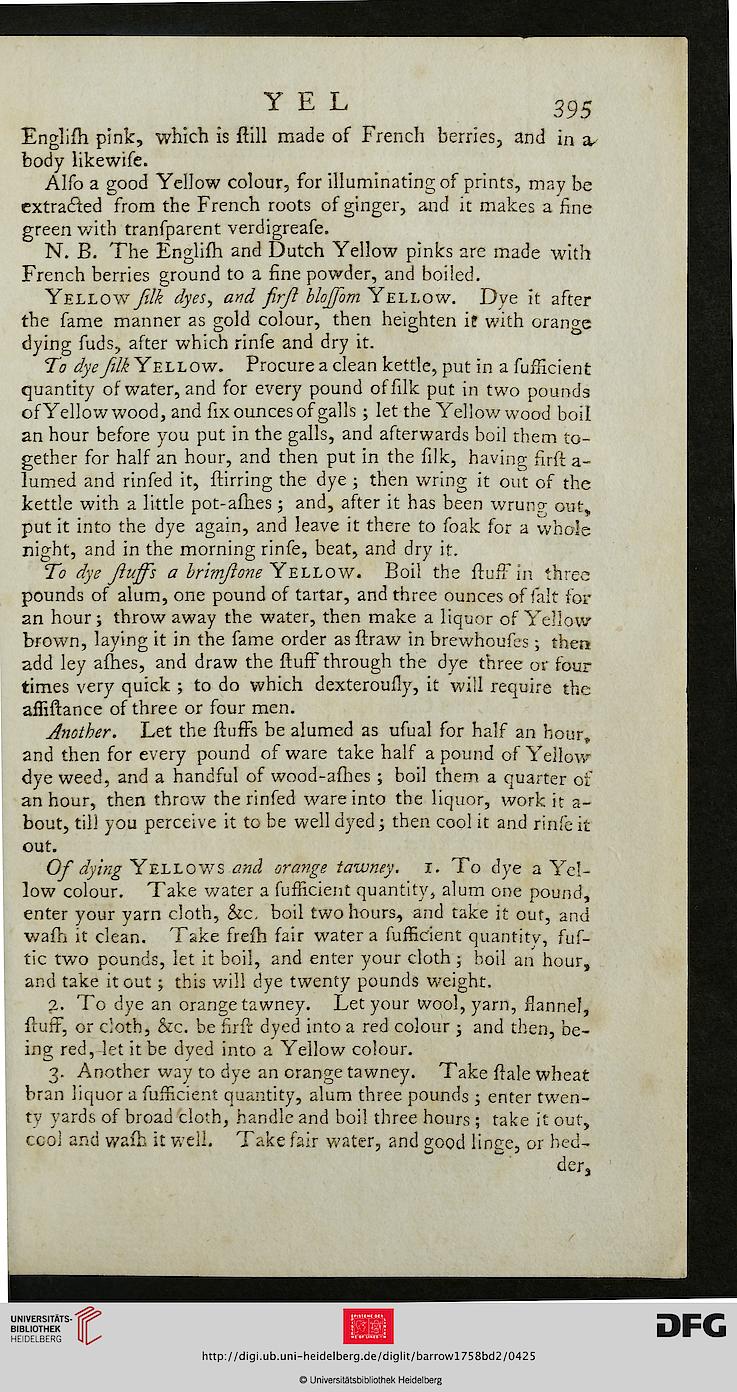 Englifh pink, which is ftill made of French berries, and in a,
body likewife.

Alfo a good Yellow colour, for illuminating of prints, may be
extracted from the French roots of ginger, and it makes a fine
green with tranfparent verdigreafe.

N. B. The Englifh and Dutch Yellow pinks are made with
French berries ground to a fine powder, and boiled.

Yellow filk dyes, and firjl blojfom Yellow. Dye it after
the fame manner as gold colour, then heighten it with orange
dying fuds, after which rinfe and dry it.

To dye filk Yellow. Procure a clean kettle, put in a fufficient
quantity of water, and for every pound of filk put in two pounds
of Yellow wood, and fix ounces of galls ; let the Yellow wood boil
an hour before you put in the galls, and afterwards boil them to-
gether for half an hour, and then put in the filk, having firfl a-
lumed and rinfed it, ftirring the dye ; then wring it out of the
kettle with a little pot-afhes; and, after it has been wrung- out,
put it into the dye again, and leave it there to foak for a whole
night, and in the morning rinfe, beat, and dry it.

To dye fluffs a brimjione Yellow. Boil the fluff in tkree
pounds of alum, one pound of tartar, and three ounces of fait for
an hour; throw away the water, then make a liquor of Yellow
brown, laying it in the fame order as ftraw in brewhoufes; then
add ley afhes, and draw the fluff through the dye three or four
times very quick ; to do which dexteroufly, it will require the
affiftance of three or four men.

Another. Let the fluffs be alumed as ufual for half an hour,
and then for every pound of ware take half a pound of Yellow
dye weed, and a handful of wood-afhes ; boil them a quarter of
an hour, then threw the rinfed ware into the liquor, work it a-
bout, till you perceive it to be well dyed; then cool it and riin'c it
out.

2. To dye an orange tawney. Let your wool, yarn, flannel,
fluff, or cloth, &c. be firft dyed into a red colour ; and then, be-
ing red, let it be dyed into a Yellow colour.