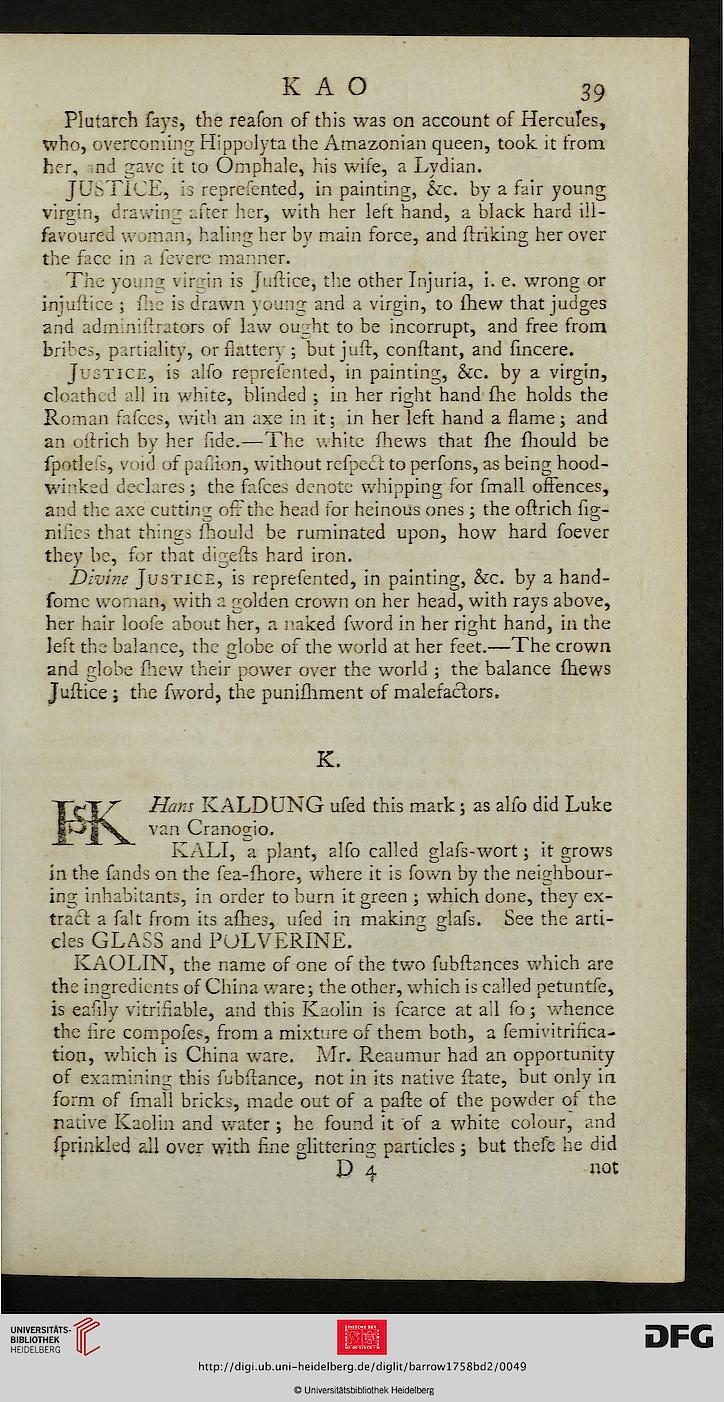 Plutarch fays, the reafon of this was on account of Hercules,
who, overcoming Hippulyta the Amazonian queen, took it from
her, ,nd gave it to Omphale, his wife, a Lydian.

JUSTICE, is reprefented, in painting, Sec. by a fair young
virgin, drawing i.fter her, with her left hand, a black hard iil-
favoured woman, haling her by main force, and ffriking her over
the face in a feverc manner.

The young virgin is Juitice, the other Injuria, i. e. wrong or
injuftice ; file is drawn yoifflg and a virgin, to lhew that judges
and adminlilrators of law ou^ht to be incorrupt, and free from
bribes, partiality, or flattery ; but juft, conftant, and fincere.

Justice, is alfo reprefented, in painting, &c. by a virgin,
cloathed all in white, blinded ; in her right hand fhe holds the
Roman fa fees, with an axe in it: in her left hand a flame; and
an oifrich by her fide.—The white fhews that fhe mould be
fpotlefs, void of pamon, without refpecf. to perfons, as being hood-
winked declares; the fr.fces denote whipping for fmall offences,
and the axe cutting off the head for heinous ones; the oftrich fig-
nhics that things fhould be ruminated upon, how hard foever
they be, for that digefts hard iron.

Divine Justice, is reprefented, in painting, &c. by a hand-
fomc woman, with a golden crown on her head, with rays above,
her hair loofe about her, a naked fvvord in her right hand, in the
left the balance, the globe of the world at her feet.—The crown
and globe mew their power over the world ; the balance (hews
Juftice ; the fvvord, the punifhment of malefactors.

KALI, a plant, alfo called glafs-wort; it grows
in the fands on the fea-fhore, where it is fown by the neighbour-
ing inhabitants, in order to burn it green ; which done, they ex-
tract, a fait from its allies, ufed in making glafs. See the arti-
cles GLASS and PuLVERINE.

KAOLIN, the name of one of the two fubftances which are
the ingredients of China ware; the other, which is called petuntfe,
is eafily verifiable, and this Kaolin is fcarce at all fo; whence
the lire compofes, from a mixture of them both, a femivitrifica-
tion, which is China ware. Mr. Reaumur had an opportunity
of examining this fubflance, not in its native (fate, but only in
form of fmall bricks, made out of a parte of the powder of the
native Kaolin and water ; he found it of a white colour, and
fprinkled all over with fine glittering particles; but thefe he did