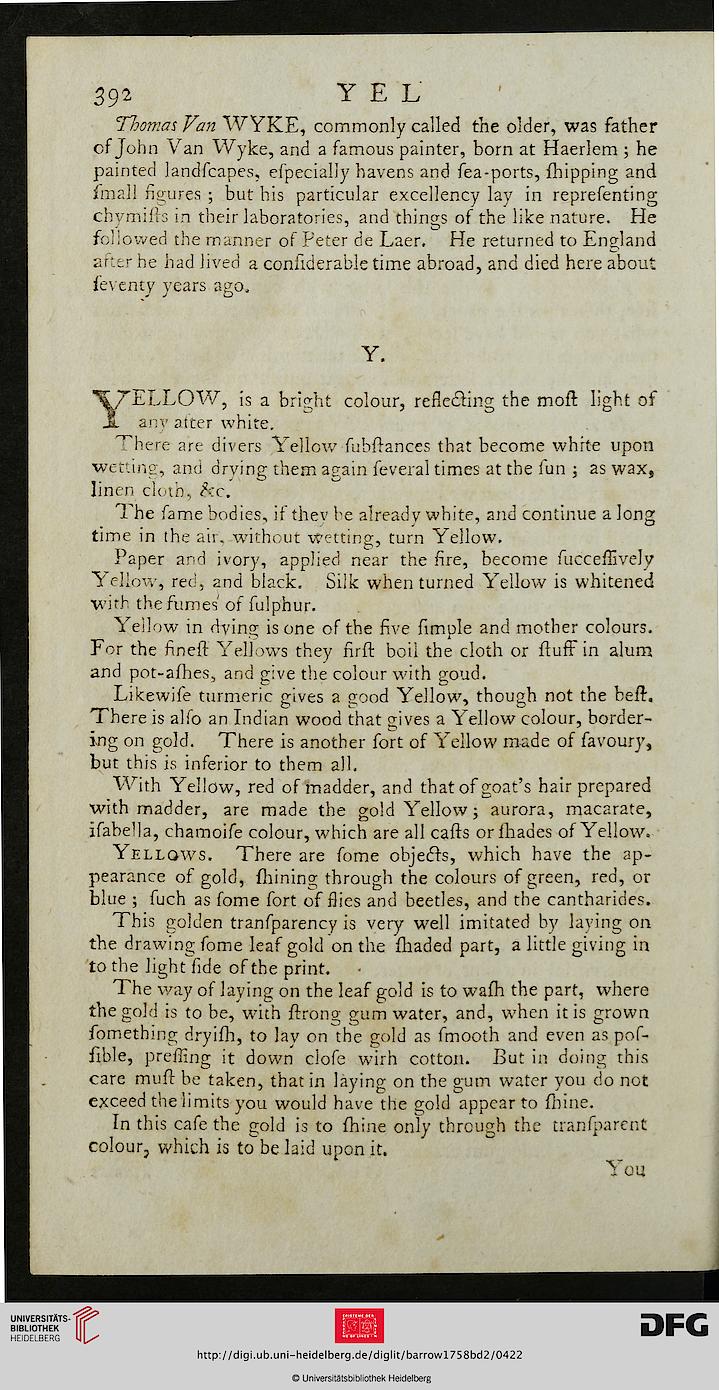 TJyomasVan WYKE, commonly called the older, was father
cf John Van Wyke, and a famous painter, born at Haerlem ; he
painted landfcapes, efpecialiy havens and fea-ports, (hipping and
fqaal] figures ; but his particular excellency lay in reprefenting
chymifts in their laboratories, and things of the like nature. He
followed the manner of Peter de Laer. He returned to England
after he had lived a confiderable time abroad, and died here about
feventy years ago.

ELLOW, is a bright colour, reflecting the moft light of
any after white.

Th ere are divers Yellow fubftanees that become white upon
wetting, and drving them again feveral times at the fun ; as wax,
linen clem, &c.

The fame bodies, if thev be already white, and continue a long
time in the air. without wetting, turn Yellow.

Paper and ivory, applied near the fire, become fucceffively
YeU.oWj redj and black. Silk when turned Yellow is whitened
with the fumes' of fulphur.

Yellow in dying is one of the five fimple and mother colours.
For the fineft Yellows they nrft boil the cloth or fluff in alum
and pot-afhes, and give the colour with goud.

Likewife turmeric gives a good Yellow, though not the befr.
Th ere is alfo an Indian wood that gives a Yellow colour, border-
ing on gold. There is another fort of Yellow made of favoury,
but this is inferior to them all.

With Yellow, red of madder, and that of goat's hair prepared
with madder, are made the gold Yellow; aurora, macarate,
ifabella, chamoife colour, which are all cafts or {hades of Yellow.

Yellows. There are fome objects, which have the ap-
pearance of gold, mining through the colours of green, red, or
blue ; fuch as fome fort of flies and beetles, and the cantharides.

This golden tranfparency is very well imitated by laving on
the drawing fome leaf gold on the {haded part, a little giving in
to the light fide of the print.

The way of laying on the leaf gold is to warn the part, where
the gold is to be, with ftrong gum water, and, when it is grown
fomething dryifh, to lay on the gold as fmooih and even as pof-
fible, prefling it down clofe wirh cotton. But in doing this
care muff, be taken, that in laying on the gum water you do net
exceed the limits you would have the gold appear to (bine.

In this cafe the gold is to fhine only through the tranfparcnt
colour, which is to be laid upon it.