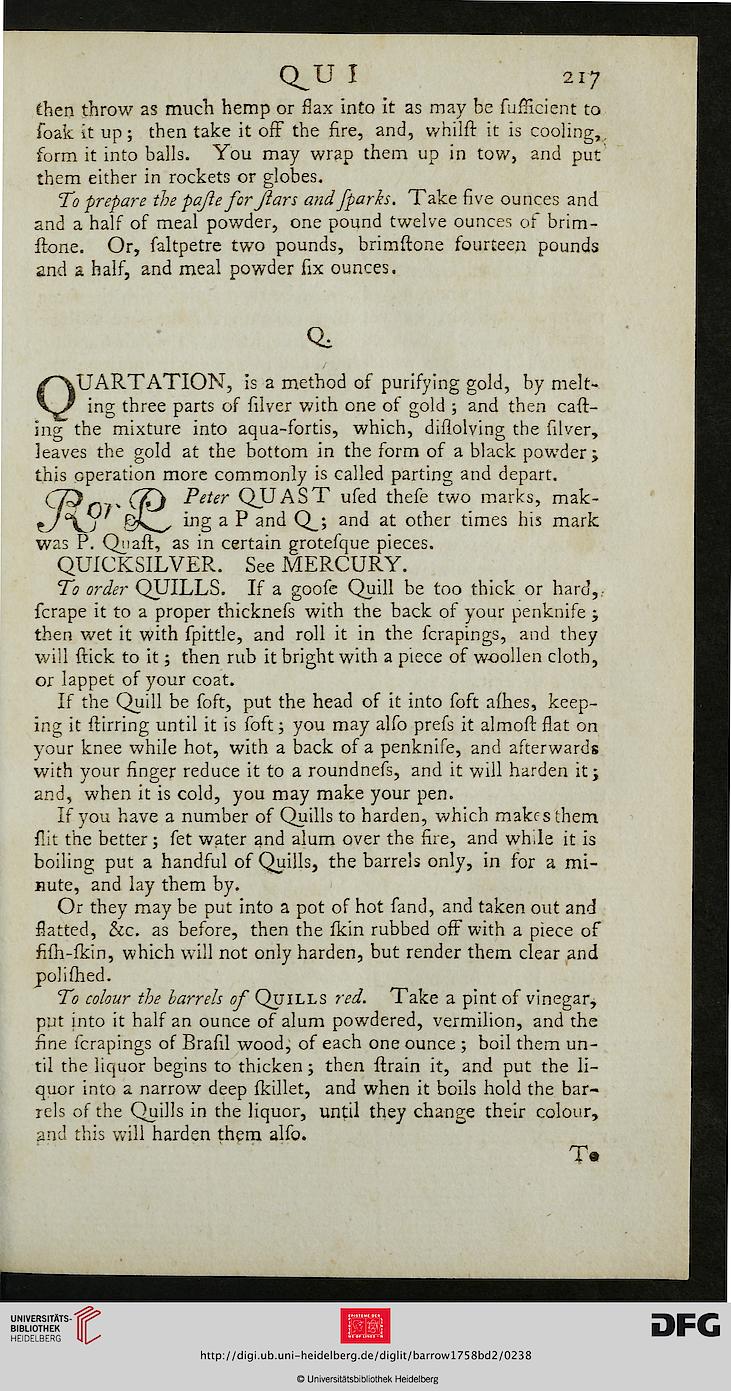 Information about OCR text
then throw as much hemp or flax into it as may be fufficient to
foak it up; then take it off the fire, and, whilft it is cooling,
form it into balls. You may wrap them up in tow, and put
them either in rockets or globes.

T? prepare the pajle for Jiars and fparks. Take five ounces and
and a half of meal powder, one pound twelve ounces of brim-
ftone. Or, faltpetre two pounds, brimftone fourteen pounds
and a half, and meal powder fix ounces.

OUARTATION, is a method of purifying gold, by melt-
ing three parts of filver with one of gold ; and then caft-
mg the mixture into aqua-fortis, which, diflolving the filver,
leaves the gold at the bottom in the form of a black powder;
this operation more commonly is called parting and depart.

(TO Peter QUAST ufed thefe two marks, mak-
j' Qs^s ing a P and Q_; and at other times his mark
was P. Qnaft, as in certain grotefque pieces.
QUICKSILVER. See MERCURY.
To order QUILLS. If a goofe Quill be too thick or hard,
fcrape it to a proper thicknefs with the back of your penknife ;
then wet it with fpittle, and roll it in the fcrapings, and they
will ftick to it; then rub it bright with a piece of woollen cloth,
or lappet of your coat.

If the Quill be foft, put the head of it into foft afhes, keep-
ing it ftirring until it is foft; you may alfo prefs it almoft flat on
your knee while hot, with a back of a penknife, and afterwards
with your finger reduce it to a roundnefs, and it will harden it;
and, when it is cold, you may make your pen.

If you have a number of Quills to harden, which makfsthem
flit the better; fet water and alum over the fire, and while it is
boiling put a handful of Quills, the barrels only, in for a mi-
nute, and lay them by.

Or they may be put into a pot of hot fand, and taken out and
flatted, &c. as before, then the fkin rubbed off with a piece of
fifh-fkin, which will not only harden, but render them clear and
polifhed.

To colour the barrels of Quills red. Take a pint of vinegar,
put into it half an ounce of alum powdered, vermilion, and the
fine fcrapings of Brafil wood, of each one ounce ; boil them un-
til the liquor begins to thicken; then {train it, and put the li-
quor into a narrow deep fkillet, and when it boils hold the bar-
rels of the Quills in the liquor, until they change their colour,
and this will harden them alfo.