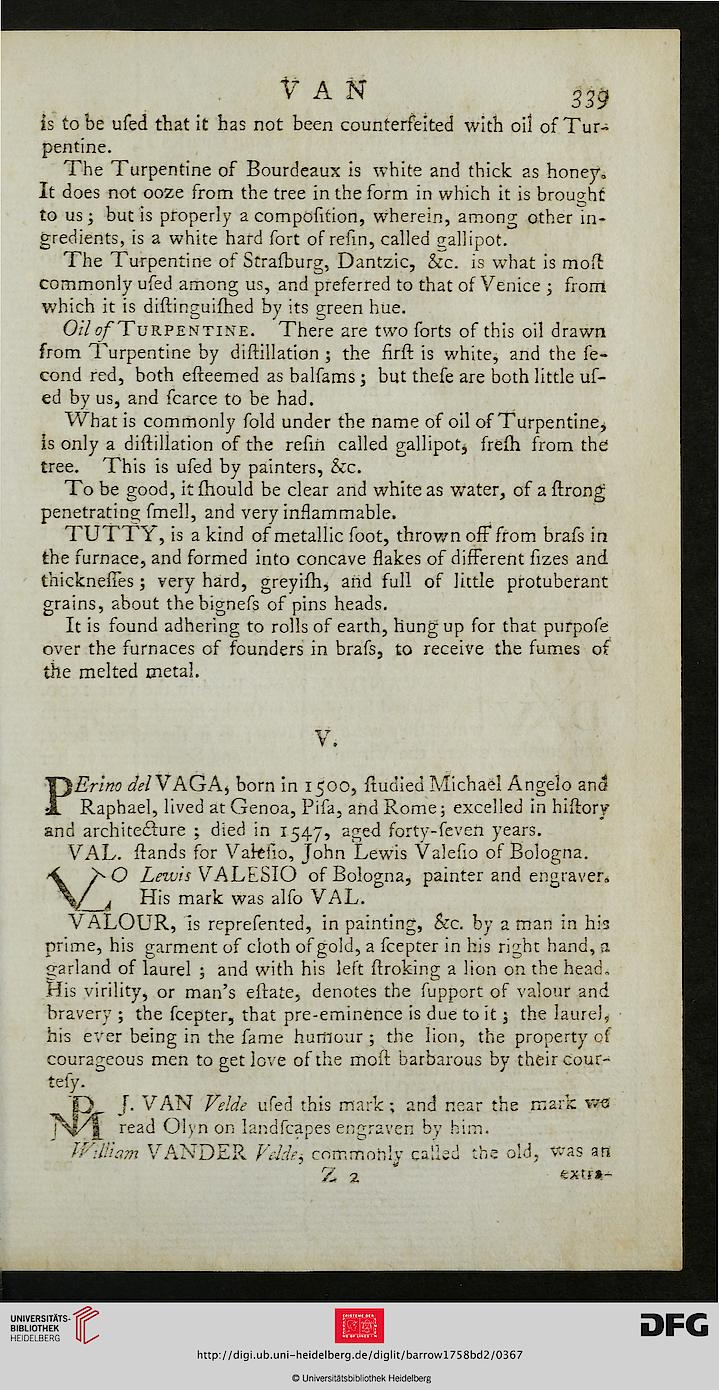 is to be ufed that it has not been counterfeited with oil of Tur-
pentine.

The Turpentine of Bourdeaux is white and thick as honey.
It does not ooze from the tree in the form in which it is brought
to us; but is properly a compofition, wherein, among other in-
gredients, is a white hard fort of refin, called gallipot.

The Turpentine of Strafburg, Dantzic, &c. is what is mod
commonly ufed among us, and preferred to that of Venice ; front
which it is diftinguifhed by its green hue.

Oil c/" Turpentine. There are two forts of this oil drawn
from Turpentine by diftillation ; the firft is white, and the fe-
cond red, both efteemed as balfams; but thefe are both little uf-
ed by us, and fcarce to be had.

What is commonly fold under the name of oil of Turpentine,
is only a diftillation of the refm called gallipot, frefh from the
tree. This is ufed by painters, &c.

To be good, it mould be clear and white as water, of a ftrong
penetrating frnell, and very inflammable.

TUTTlC, is a kind of metallic foot, thrown off from brafs in
the furnace, and formed into concave flakes of different fizes and
thickneffes; very hard, greyifh, and full of little protuberant
grains, about thebignefs of pins heads.

It is found adhering to rolls of earth, hungup for that purpofe
over the furnaces of founders in brafs, to receive the fumes of
the melted metal.

VO Lewis VALESIO of Bologna, painter and engraver,
t His mark was alfo VAL.
VALOUR, is reprefented, in painting, &c. by a man in h*9
prime, his garment of cloth of gold, a fcepter in his right hand, a
garland of laurel ; and with his left ftroking a lion on the head.
His virility, or man's eftate, denotes the fupport of valour and
bravery ; the fcepter, that pre-eminence is due to it; the laurel,
his ever being in the fame humour ; the lion, the property of
courageous men to get love of the moft barbarous by their cour-
tefy.

J. VAN Velde ufed this mark ; and near the mark «p9
read Olyn on landfcapes engraven by him.
Wi&am VANDER. Vdd?, commonly called the old, was an