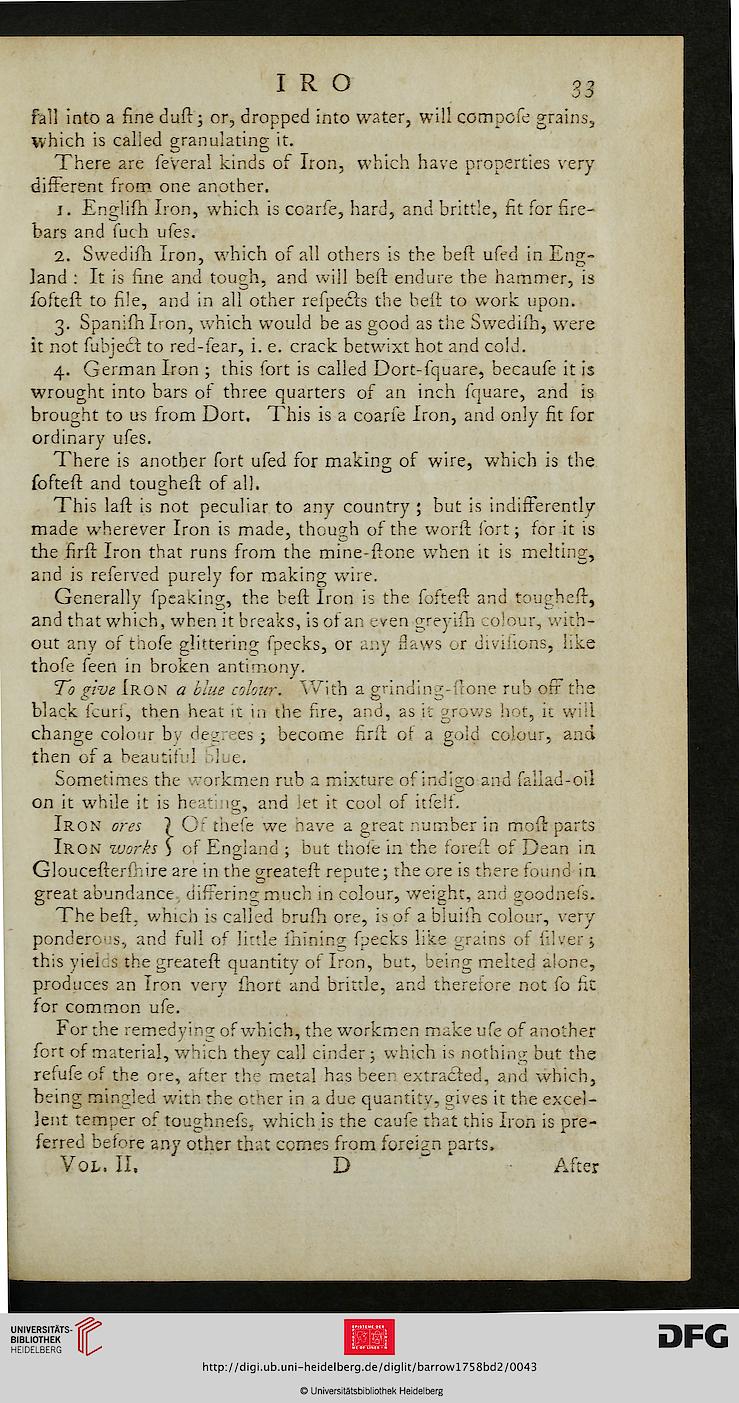 fall into a fine duft; or, dropped into water, will compofe grains,
which is called granulating it.

There are feveral kinds of Iron, which have properties very
different from one another.

j. Englifn Iron, which is coarfe, hard, and brittle, fit for fire-
bars and fuch ufes.

2. Swedifh Iron, which of all others is the beft ufed in Eng-
land : It is fine and tough, and will beft endure the hammer, is
fofteft to file, and in all other refpects the belt to work upon.

3. Spanifn Iron, which would be as good as the Swedifh, were
it not fubject to red-fear, i. e. crack betwixt hot and cold.

4. German Iron ; this fort is called Dort-fquare, becaufe it is
wrought into bars of three quarters of an inch fquare, and is
brought to us from Dort. This is a coarfe Iron, and only fit for
ordinary ufes.

There is another fort ufed for making of wire, which is the
fofteft and tougheft of all.

This laft is not peculiar to any country ; but is indifferently
made wherever Iron is made, though of the worft fort; for it is
the firft Iron that runs from the mine-ftone when it is melting,
and is referved purely for making wire.

Generally fpeaking, the beft Iron is the fofteft and tougheft,
and that which, when it breaks, is of an even greyifh colour, with-
out any of thofe glittering fpecks, or any flaws or divihons, like
thofe feen in broken antimony.

To give Iron a blue colour. "With a grinding-ftone rub off the
black fcuri, then heat it in the fire, and, as it grows hot, ic will
change colour by degrees ; become firft of a gold colour, and
then of a beautiful blue.

Sometimes the workmen rub a mixture of indigo and fallad-oil
on it while it is heating, and let it cool of itfeit.

Iron ores ? Of thefe we have a great number in moft parts

Iron works ) of England ; but thofe in the foreft of Dean in
Gloucefterfhire are in the greateft repute; the ore is there found in
great abundance, difterincr much in colour, weight, and groodnels.

The beft. which is called brufh ore, is of a bluifh colour, very
ponderous, and full of little mining fpecks like grains of filver y
this yields the greateft quantity of Iron, but, being melted alone,
produces an Iron very fhort and brittle, and therefore not fo fit
for common ufe.

For the remedying of which, the workmen make ufe of another
fort of material, which they call cinder ; which is nothing but the
refufe of the ore, after the metal has been extracted, and which,
being mingled witn the other in a due quantity, gives it the excel-
lent temper of toughnefs, which is the caufe that this Iron is pre-
ferred before any other that comes from forei?n parts.