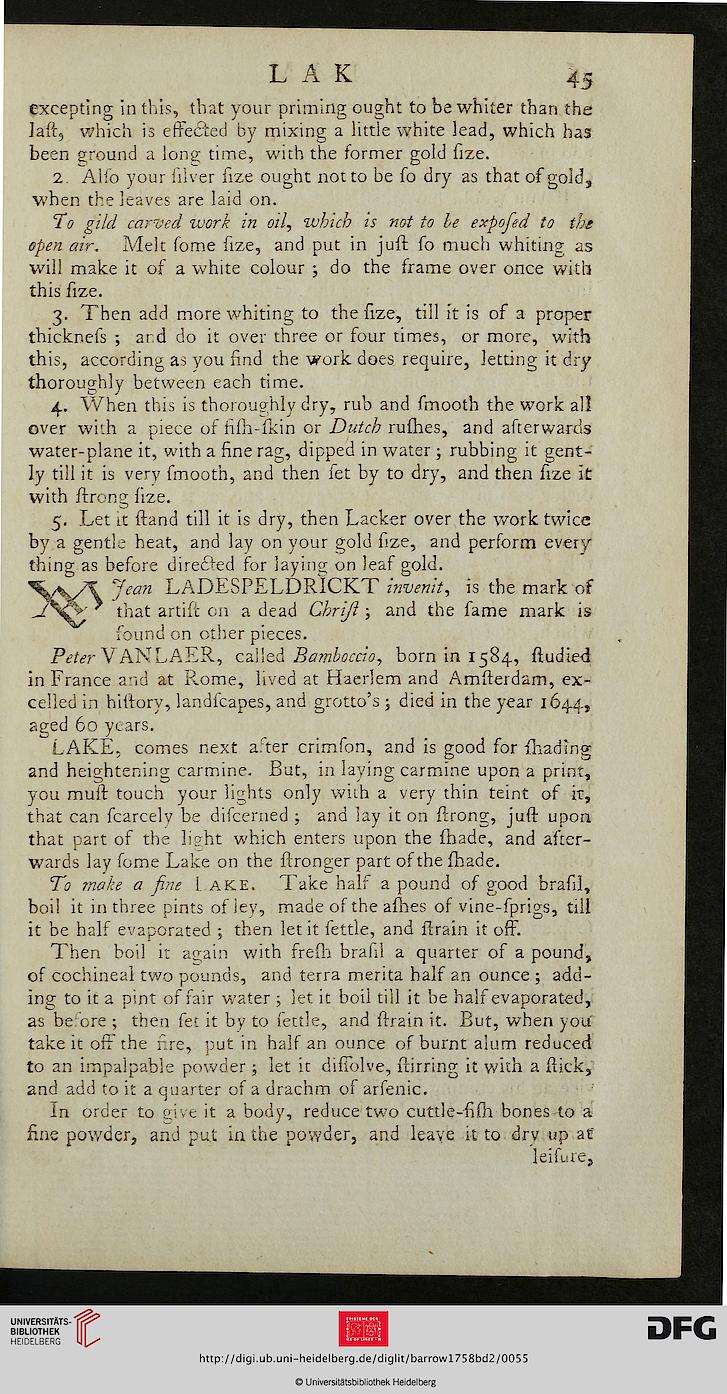 cepting in this, that your priming ought to be whiter than the
laft, which is effected by mixing a little white lead, which has
been ground a long time, with the former gold fize.

2 Alfo your hlver fize ought not to be fo dry as that of gold,
when the leaves are laid on.

To gild carved work in oil, which is not to he expofed to the
open air, Mek fome fize, and put in juft fo much whiting as
will make it of a white colour ; do the frame over once with
this fize.

3. Then add more whiting to the fize, till it is of a proper
thicknefs ; ar.d do it over three or four times, or more, with
this, according as you find the work does require, letting it dry
thoroughly between each time.

4. When this is thoroughly dry, rub and fmooth the work all
over with a piece of fifh-fkin or Dutch rufhes, and afterwards
water-plane it, with a fine rag, dipped in water ; rubbing it gent-
ly till it is verv fmooth, and then fet by to dry, and then fize it
with flxong fize.

5. Let it ftand till it is dry, then Lacker over the work twice
by a gentle heat, and lay on your gold fize, and perform every
thing as before directed for laying; on leaf gold.

Jean LADESPELDRICKT hwmt, is the mark of
V ' that artift on a dead Chrijl; and the fame mark is
found on other pieces.
P<?to-VANLAER, called Bamboccio, born in 1584, fludied
in France and at Rome, lived at Haerlem and Amfterdam, ex-
celled in hiftory, landfcapes, and grotto's ; died in the year 1644,
aged 60 years.

LAKE, comes next after crimfon, and is good for {hading
and heightening carmine. But, in laying carmine upon a print,
you muff, touch your lights only with a very thin teint of it,
that can fcarcely be difcerned ; and lay it on ftrong, juft upon
that part of the light which enters upon the made, and after-
wards lay fome Lake on the ftronger part ofthefhade.

To make a fine [ ake. Take half a pound of good brafil,
boil it in three pints of ley, made of the afhes of vine-fprigs, till
it be half evaporated ; then let it fettle, and ftrain it off.

Then boil it again with frefh brafil a quarter of a pound,
of cochineal two pounds, and terra merita half an ounce ; add-
ing to it a pint of fair water ; let it boil till it be half evaporated,
as before ; then fet it by to fettle, and ftrain it. But, when you
take it off the fire, put in half an ounce of burnt alum reduced
to an impalpable powder ; let it diffolve, ftirring it with a ffick,
and add to it a quarter of a drachm of arfenic.

In order to e;ive it a body, reduce two cuttle-fifh bones to a
fine powder, and put in the powder, and leave it to dry up at7