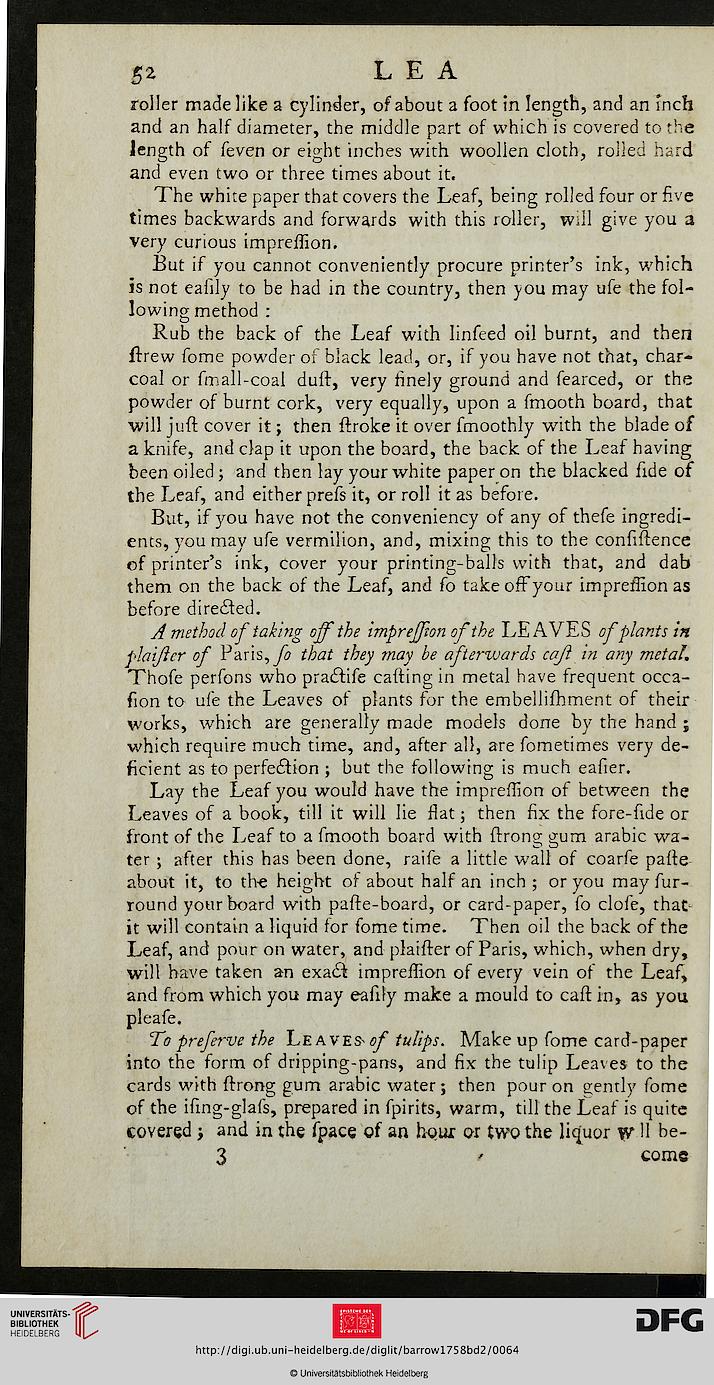 roller made like a cylinder, of about a foot in length, and an inch
and an half diameter, the middle part of which is covered to the
length of feven or eight inches with woollen cloth, rolled hard
and even two or three times about it.

The white paper that covers the Leaf, being rolled four or five
times backwards and forwards with this roller, will give you a
very curious impreffion.

But if you cannot conveniently procure printer's ink, which
is not eafily to be had in the country, then you may ufe the fol-
lowing method :

Rub the back of the Leaf with linfeed oil burnt, and then
ftrew fome powder of black lead, or, if you have not that, char-
coal or fmall-coal dull, very finely ground and fearced, or the
powder of burnt cork, very equally, upon a fmooth board, that
will juft cover it; then ftroke it over fmoothly with the blade of
a knife, and clap it upon the board, the back of the Leaf having
been oiled; and then lay your white paper on the blacked fide of
the Leaf, and either prefs it, or roll it as before.

But, if you have not the conveniency of any of thefe ingredi-
ents, you may ufe vermilion, and, mixing this to the confidence
of printer's ink, cover your printing-balls with that, and dab
them on the back of the Leaf, and fo take off your impreffion as
before directed.

A method of taking off the impreffion of the LEAVES of plants in
fla'tftcr of Paris, fo that they may be afterwards caff in any metal.
Thofe perfons who practife catting in metal have frequent occa-
fion to ufe the Leaves of plants for the embellifhment of their
works, which are generally made models done by the hand ;
which require much time, and, after all, are fometimes very de-
ficient as to perfection ; but the following is much eafier.

Lay the Leaf you would have the impreffion of between the
Leaves of a book, till it will lie flat; then fix the fore-fide or
front of the Leaf to a fmooth board with ftrong gum arabic wa-
ter ; after this has been done, raife a little wall of coarfe pafte
about it, to the height of about half an inch ; or you may fur-
round your board with pafte-board, or card-paper, fo clofe, that-
it will contain a liquid tor fome time. Then oil the back of the
Leaf, and pour on water, and plaitter of Paris, which, when dry,
will have taken an exact impreffion of every vein of the Leaf,
and from which you may eafily make a mould to caff, in, as you
pleafe.

To preferve the Leaves^ of tulips. Make up fome card-paper
into the form of dripping-pans, and fix the tulip Leaves to the
cards with ftrong gum arabic water; then pour on gently fome
of the ifing-glafs, prepared in fpirits, warm, till the Leaf is quite
covered > and in the fpace of an hour or two the liquor w H be-
3 1 come