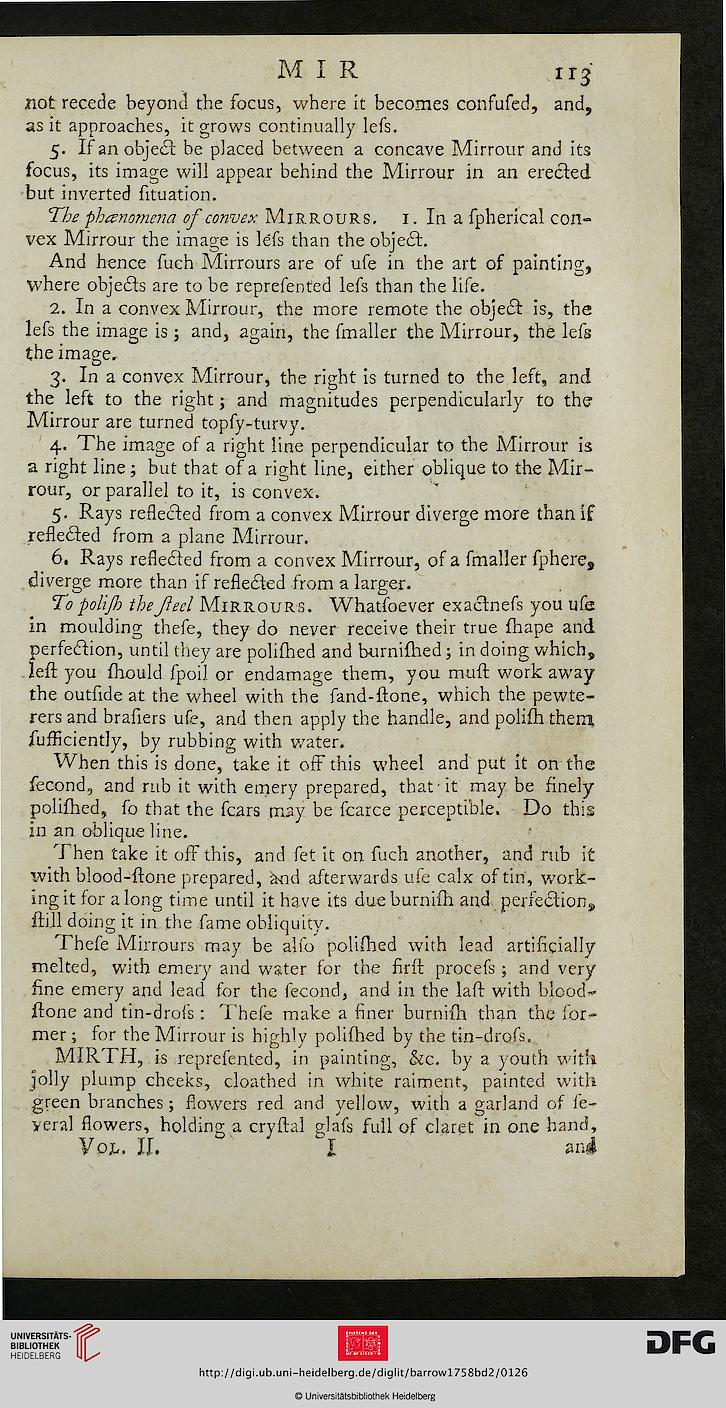 not recede beyond the focus, where it becomes confufed, and,
as it approaches, it grows continually lefs.

5. If an object be placed between a concave Mirrour and its
focus, its image will appear behind the Mirrour in an erected
but inverted fituation.

The phenomena of convex Mirrours. 1. In a fpherical con-
vex Mirrour the image is lefs than the object.

And hence fuch Mirrours are of ufe in the art of painting,
where objects are to be reprefented lefs than the life.

2. In a convex Mirrour, the more remote the object is, the
lefs the image is; and, again, the fmaller the Mirrour, the lefs
the image.

3. In a convex Mirrour, the right is turned to the left, and
the left to the right; and magnitudes perpendicularly to the
Mirrour are turned topfy-turvy.

When this is done, take it off this wheel and put it on the
fecond, and rub it with emery prepared, that it may be finely
polifhed, fo that the fears may be fcarce perceptible. Do this
in an oblique line.

Then take it off this, and fet it on fuch another, and rub it
ivith blood-ffone prepared, and afterwards ufe calx of tin, work-
ing it for a long time until it have its due burnifh and perfection^
ftill doing it in the fame obliquity.

Thefe Mirrours may be alio polifhed with lead artificially
melted, with emery and water for the firft procefs; and very
fine emery and lead for the fecond, and in the laft with blood-
ftone and tin-drofs: Thefe make a finer burnifh than the for-
mer ; for the Mirrour is highly polifhed by the tin-drofs.

MIRTH, is reprefented, in painting, &c. by a youth witH
jolly plump cheeks, cloathed in white raiment, painted with
green branches ; flowers red and yellow, with a garland of fe-
eral flowers, holding a cryftal glafs full of claret in one hand,
Vol.. II. I an4