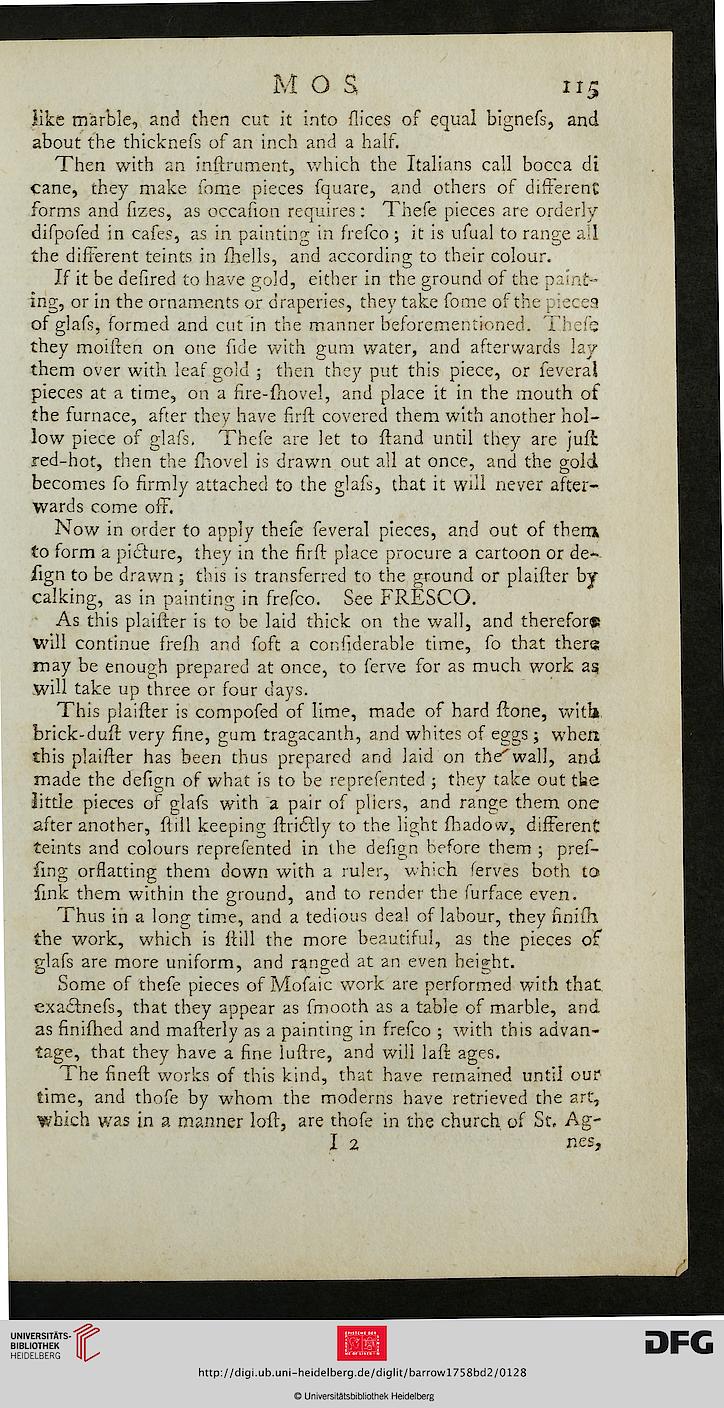 like marble, and then cut it into dices of equal bignefs, and
about the thicknefs of an inch and a half.

Then with an inftruaient, which the Italians call bocca di
cane, they make fome pieces fquare, and others of different
forms and fizes, as cccafion requires: Thefe pieces are orderly
difpofed in cafes, as in painting in frefco ; it is ufual to range all
the different teints in {hells, and according to their colour.

If it be defired to have gold, either in the ground of the paint-
ing, or in the ornaments or draperies, they take fome of the pieces
of glafs, formed and cut in the manner beforementioned. Thefe
they moiften on one fide with gum water, and afterwards lay
them over with leaf gold ; then they put this piece, or feveral
pieces at a time, on a fire-ihovel, and place it in the mouth of
the furnace, after they have firft covered them with another hol-
low piece of glafs, Thefe are let to ftand until they are juft
red-hot, then the {hovel is drawn out all at once, and the gold
becomes fo firmly attached to the glafs, that it will never after-
wards come off.

Now in order to apply thefe feveral pieces, and out of them
to form a picture, they in the firft place procure a cartoon or de-
fign to be drawn ; this is transferred to the ground or plaifter by
calking, as in painting in frefco. See FRESCO.

As this plaifter is to be laid thick on the wall, and therefor*
will continue frefh and foft a cor.fiderable time, fo that there
may be enough prepared at once, to ferve for as much work as;
will take up three or four days.

This plaifter is compofed of lime, made of hard ftone, with,
brick-duft very fine, gum tragacanth, and whites of eggs; when
this plaifter has been thus prepared and laid on the'wall, and
made the defign of what is to be reprefented ; they take out tlse
little pieces of glafs with a pair of pliers, and range them one
after another, ftill keeping ftricily to the light fbadow, different
teints and colours reprefented in the defign before them ; pref-
ixing orflatting them down with a ruler, which ferves both to
fink them within the ground, and to render the furface even.

Thus in a long time, and a tedious deal of labour, they nnifh
the v/ork, which is ftill the more beautiful, as the pieces of
glafs are more uniform, and ranged at an even height.

Some of thefe pieces of Mofaic work are performed with that
exaefnefs, that they appear as fmooth as a table of marble, and
as finifhed and mafterly as a painting in frefco ; with this advan-
tage, that they have a fine luftre, and will laft ages.

The fineft works of this kind, that have remained until our
time, and thofe by whom the moderns have retrieved the art,
which was in a manner loft, are thofe in the church of St. Ag-