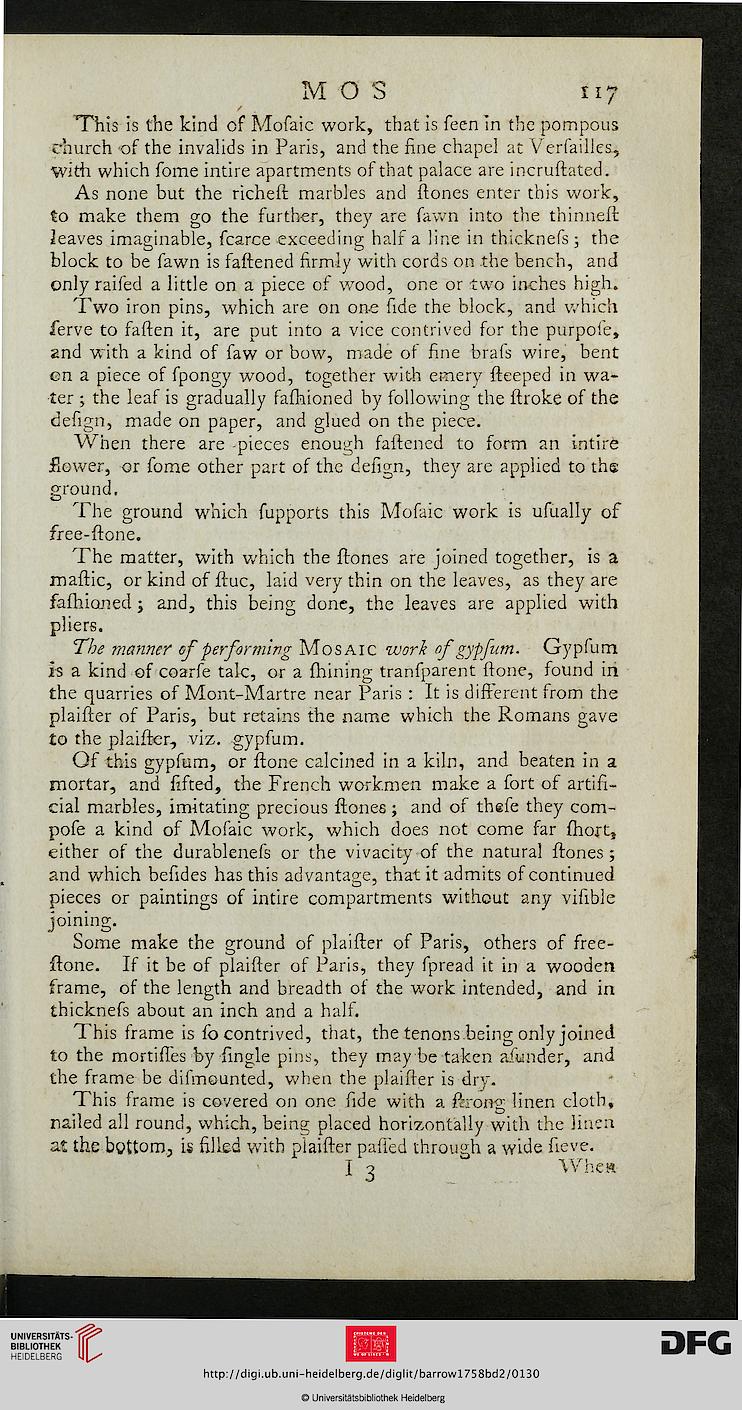 This is the kind of Mofaic work, that is feen in the pompous
c hurch of the invalids in Paris, and the fine chapel at Verfailles^
with which fome intire apartments of that palace are incruftated.

As none but the richeft marbles and ftones enter this work,
to make them go the further, they are fawn into the thinneft
leaves imaginable, fcarce exceeding half a line in thicknefs ; the
block to be fawn is faftened firmly with cords on the bench, and
only railed a little on a piece of wood, one or two inches high.

Two iron pins, which are on one fide the block, and which
ferve to faften it, are put into a vice contrived for the purpofe,
2nd with a kind of faw or bow, made of fine brafs wire, bent
en a piece of fpongy wood, together with emery fteeped in wa-
ter ; the leaf is gradually fafhioned by following the ftroke of the
defign, made on paper, and glued on the piece.

When there are -pieces enough faftened to form an intire
flower, or fome other part of the defign, they are applied to the
ground.

The matter, with which the ftones are joined together, is a
maftic, or kind of flue, laid very thin on the leaves, as they are
fafhioned ; and, this being done, the leaves are applied with
pliers.

Of this gypfum, or ftone calcined in a kiln, and beaten in a
mortar, and fifted, the French workmen make a fort of artifi-
cial marbles, imitating precious ftones ; and of thefe they com-
pofe a kind of Mofaic work, which does not come far fhort,
either of the durablenefs or the vivacity of the natural ftones;
and which befides has this advantage, that it admits of continued
pieces or paintings of intire compartments without any vifible
joining.

This frame is fo contrived, that, the tenons being only joined
to the mortifies by fingle pins, they may be taken afunder, and
the frame be difmounted, when the plaifter is dry.

This frame is covered on one fide with a ftrong linen cloth,
nailed all round, which, being placed horizontally with the linc:i
at the bottom, is filled with plaifter palled through a wide fieve.