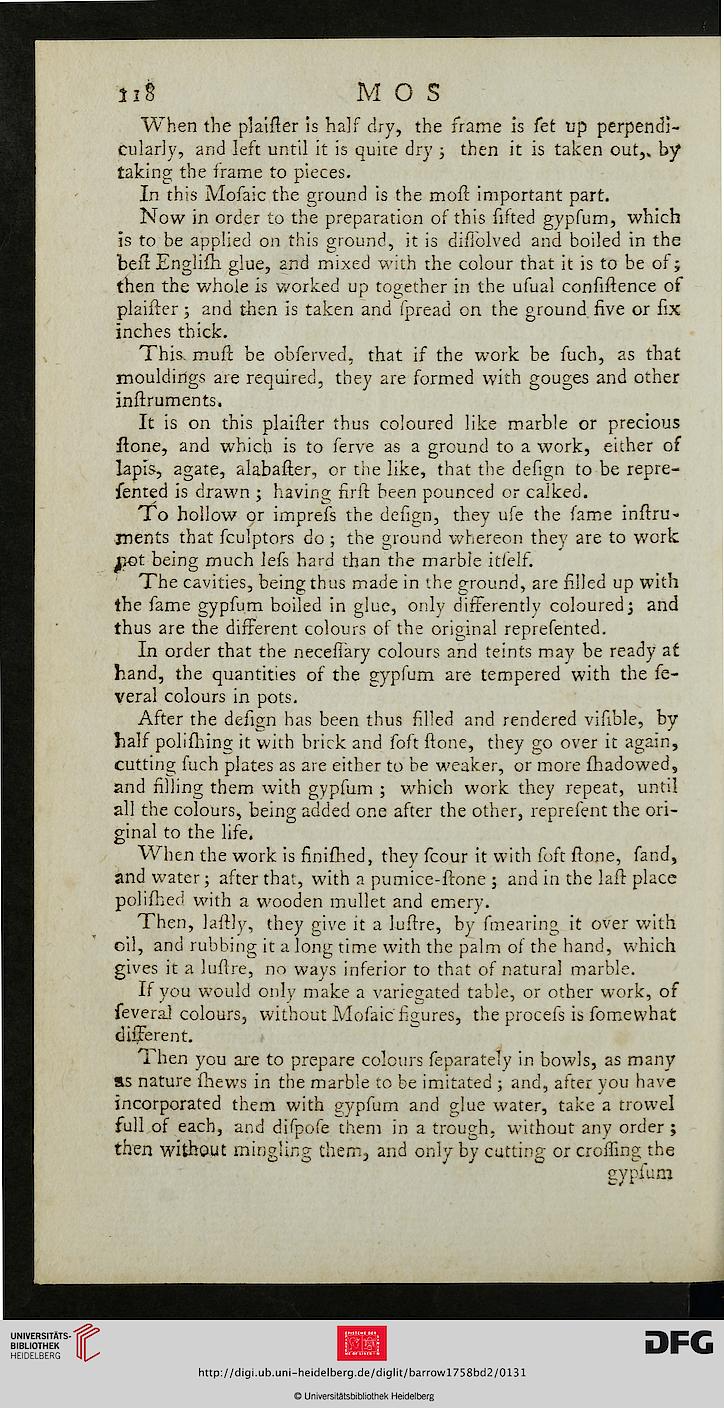 When the plaifter is half dry, the frame is fet up perpendi-
cularly, and left until it is quite dry ; then it is taken out,v by
taking the frame to pieces.

In this Mofaic the ground is the moff. important part.

Now in order to the preparation of this fifted gypfum, which
is to be applied on this ground, it is diflolved and boiled in the
befr. Englifh glue, and mixed with the colour that it is to be of;
then the whole is worked up together in the ufual confiffence of
plaifter ; and then is taken and fpread cn the ground five or fix
inches thick.

This. muff, be obferved, that if the work be fuch, as that
mouldings are required, they are formed with gouges and other
inftruments.

It is on this plaifter thus coloured like marble or precious
ftone, and which is to ferve as a ground to a work, either of
lapis, agate, alabafier, or the like, that the defign to be repre-
fented is drawn ; having firft been pounced or calked.

To hollow or imprefs the defign, they ufe the fame inftru-
jnents that fculptors do ; the ground whereon they are to work
fiot being much lefs hard than the marble itlelf.

The cavities, being thus made in the ground, are filled up with
the fame gypfum boiled in glue, only differently coloured \ and
thus are the different colours of the original reprefented.

In order that the neceftary colours and feints may be ready at
hand, the quantities of the gypfum are tempered with the fe-
veral colours in pots.

After the defign has been thus filled and rendered vifible, by
half polifhing it with brick and foft ftone, they go over it again,
cutting fuch plates as are either to be weaker, or more fhadowed,
and filling them with gypfum ; which work they repeat, until
all the colours, being added one after the other, reprefent the ori-
ginal to the life.

When the work is finifihed, they fcour it with foft ftone, fand,
and water; after that, with a pumice-ffone ; and in the laft place
polifhed with a wooden mullet and emery.

Then, laffly, they give it a luftre, by fmearing it over with
oil, and rubbing it a long time with the palm of the hand, which
gives it a luftre, no ways inferior to that of natural marble.

If you would only make a variegated table, or other work, of
feveraJ colours, without Mofaic figures, the procefs is fomewhat
different.

1 hen you are to prepare colours feparately in bowls, as many
as nature fhews in the marble to be imitated ; and, after you have
incorporated them with gypfum and glue water, take a trowel
full of each, and difpofe them in a trough, without any order ;
then without mingling them, and only by cutting or crcffins; the