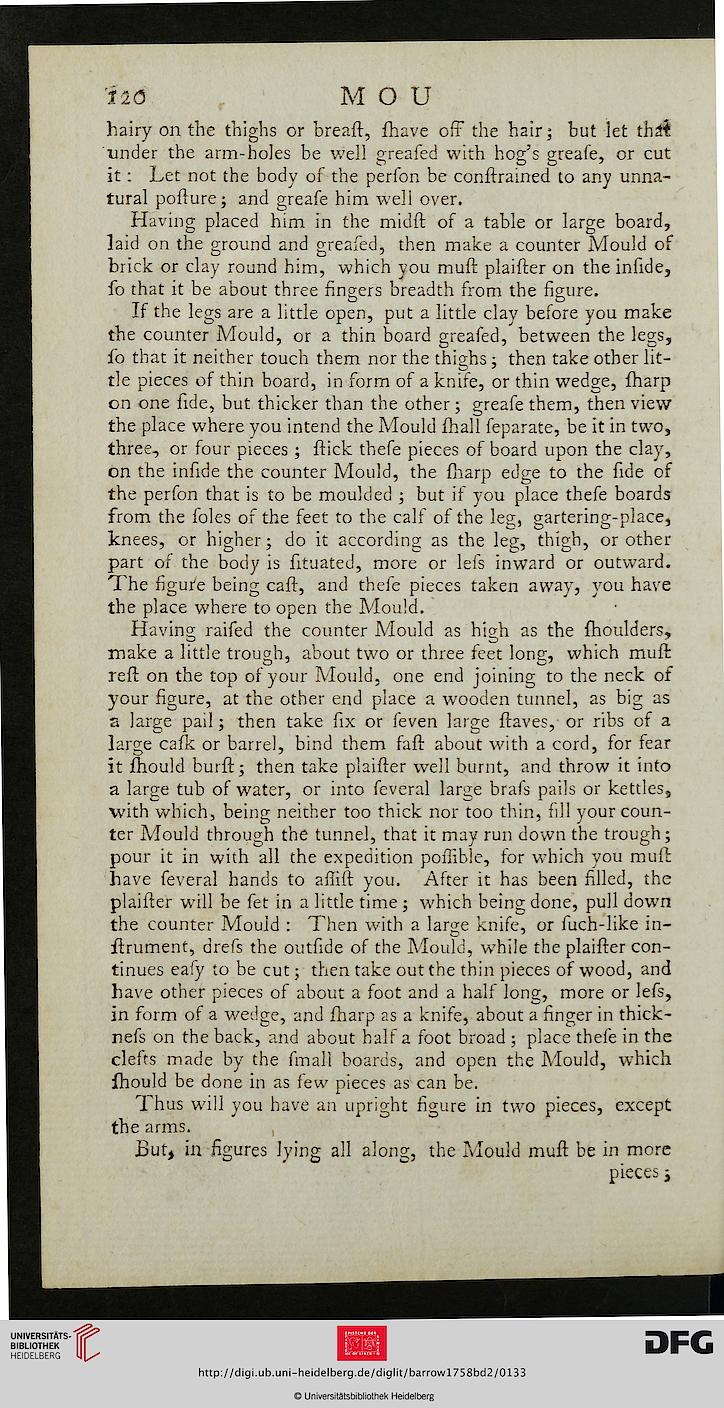 hairy on the thighs or breaft, {have off the hair; but let thai
under the arm-holes be well greafed with hog^s greafe, or cut
it: Let not the body of the perfon be conftrained to any unna-
tural pofture; and greafe him well over.

Having placed him in the midft of a table or large board,
laid on the ground and greafed, then make a counter Mould of
brick or clay round him, which you muft plaifter on the inhde,
fo that it be about three fingers breadth from the figure.

If the legs are a little open, put a little clay before you make
the counter Mould, or a thin board greafed, between the legs,
fo that it neither touch them nor the thighs; then take other lit-
tle pieces of thin board, in form of a knife, or thin wedge, fharp
cn one fide, but thicker than the other ; greafe them, then view
the place where you intend the Mould fhall feparate, be it in two,
three, or four pieces ; (tick thefe pieces of board upon the clay,
on the infide the counter Mould, the fharp edge to the fide of
the perfon that is to be moulded ; but if you place thefe boards
from the foles of the feet to the calf of the leg, gartering-place,
knees, or higher; do it according as the leg, thigh, or other
part of the body is fituated, more or lefs inward or outward.
The figure being caff, and thefe pieces taken away, vou have
the place where to open the Mould.

Having; raifed the counter Mould as high as the fhoulders,
make a little trough, about two or three feet long, which muft
reft on the top of your Mould, one end joining to the neck of
your figure, at the other end place a wooden tunnel, as big as
a large pail; then take fix or feven large flaves, or ribs of a
large cafk or barrel, bind them faff about with a cord, for fear
it fhould burft; then take plaifter well burnt, and throw it into
a large tub of water, or into feveral large brafs pails or kettles,
with which, being neither too thick nor too thin, fill your coun-
ter Mould through the tunnel, that it may run down the trough;
pour it in with all the expedition poilible, for which you mult
have feveral hands to affift you. After it has been filled, the
plaifter will be fet in a little time ; which being done, pull down
the counter Mould : Then with a large knife, or fuch-like in-
ftrument, drefs the outfide of the Mould, while the plaifter con-
tinues eafy to be cut; then take out the thin pieces of wood, and
have other pieces of about a foot and a half long, more or lefs,
in form of a wedge, and fharp as a knife, about a finger in thick-
nefs on the back, and about half a foot broad ; place thefe in the
clefts made by the fmall boards, and open the Mould, which
fhould be done in as few pieces as can be.

Thus will you have an upright figure in two pieces, except
the arms.

But, in figures lying all along, the Mould muft be in more