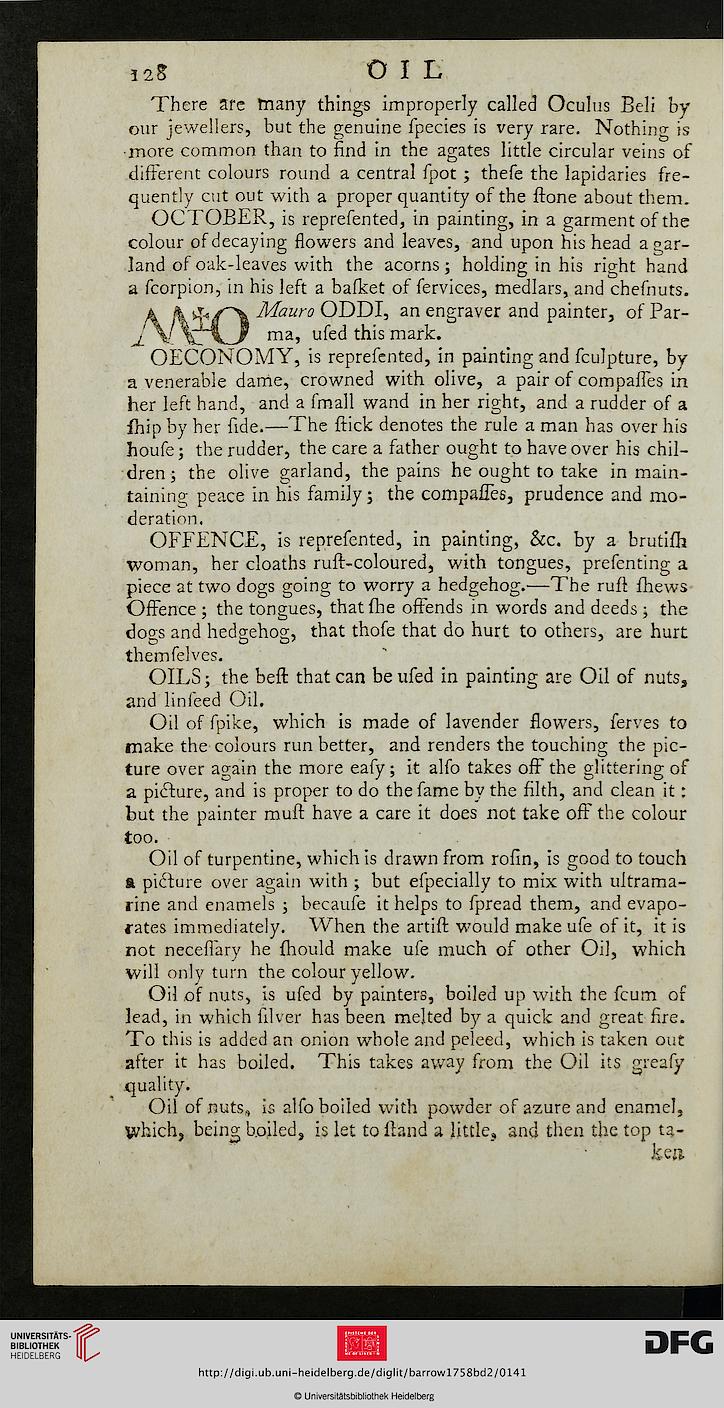 There arc many things improperly called Oculus Beli by
our jewellers, but the genuine fpecies is very rare. Nothing is
more common than to find in the agates little circular veins of
different colours round a central fpot ; thefe the lapidaries fre-
quently cut out with a proper quantity of the ftone about them.

OCTOBER, is reprefented, in painting, in a garment of the
colour of decaying flowers and leaves, and upon his head a gar-
land of oak-leaves with the acorns; holding in his right hand
a fcorpion, in his left a bafket of fervices, medlars, and chefnuts.

OECONOMY, is reprefented, in painting and fculpture, by
a venerable dame, crowned with olive, a pair of compares in
her left hand, and a fmall wand in her right, and a rudder of a
fhip by her fide.—The flick denotes the rule a man has over his
houfe; the rudder, the care a father ought to have over his chil-
dren ; the olive garland, the pains he ought to take in main-
taining peace in his family; the compaffes, prudence and mo-
deration.

OFFENCE, is reprefented, in painting, &c. by a brutifh
woman, her cloaths ruft-coloured, with tongues, prefenting a
piece at two dogs going to worry a hedgehog.—The ruft mews
Offence ; the tongues, thatfhe offends in words and deeds ; the
doo-s and hedgehog, that thofe that do hurt to others, are hurt
themfelves.

OILS; the beft that can be ufed in painting are Oil of nuts,
and linfeed Oil.

Oil of fpike, which is made of lavender flowers, ferves to
make the colours run better, and renders the touching the pic-
ture over again the more eafy ; it alfo takes off the glittering of
a picture, and is proper to do the fame by the filth, and clean it:
but the painter muff have a care it does not take off the colour
too.

Oil of turpentine, which is drawn from rofin, is good to touch
ft picture over again with ; but efpecially to mix with ultrama-
rine and enamels ; becaufe it helps to fpread them, and evapo-
rates immediately. When the artift would make ufe of it, it is
not neceffary he mould make ufe much of other Oil, which
will onlv turn the colour yellow.

Oil of nuts, is ufed by painters, boiled up with the fcum of
lead, in which iilver has been melted by a quick and great fire.
To this is added an onion whole and peleed, which is taken out
after it has boiled. This takes away from the Oil its greafy
quality.

Oil of nuts, is alfo boiled with powder of azure and enamel,
Which, being boiled, is let to Hand a little, and then the top ta-
ken