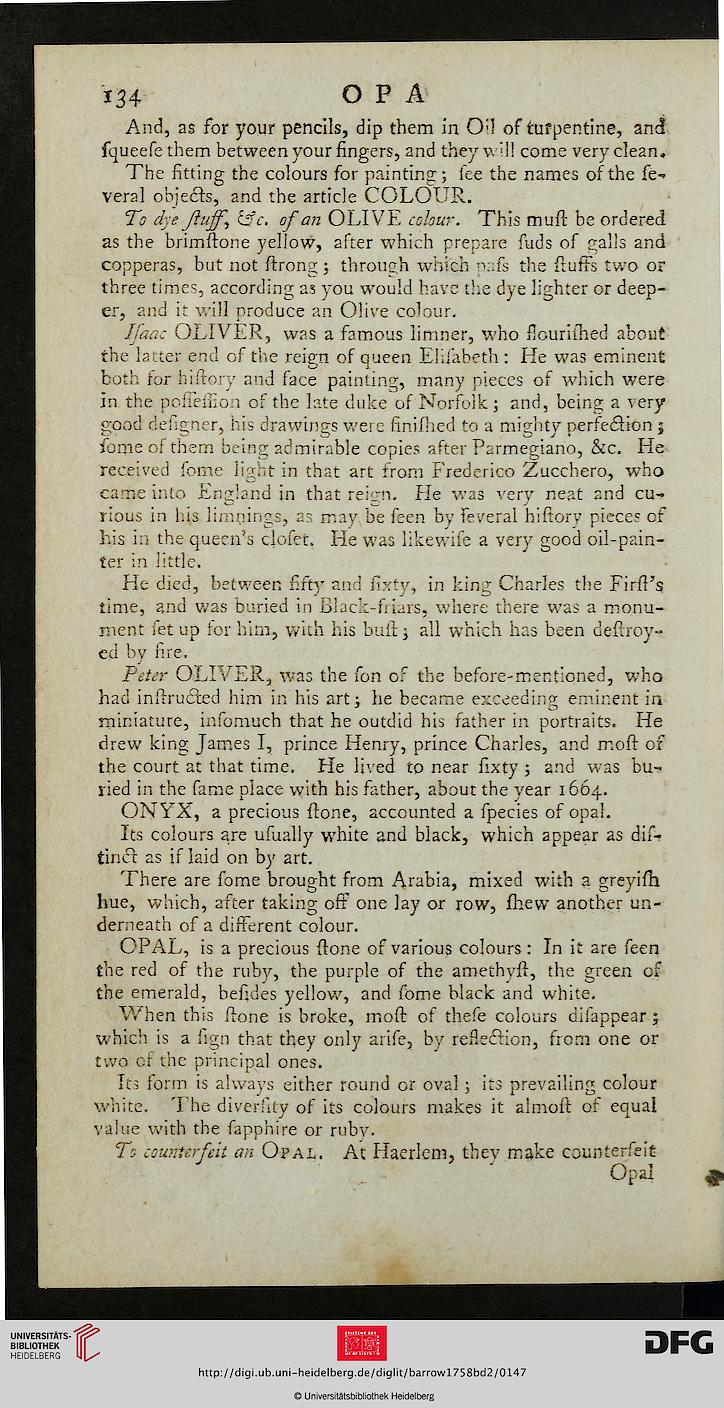 And, as for your pencils, dip them in 0;1 of turpentine, and

fqueefethem between your fingers, and they will come very clean.

The fitting the colours for painting; fee the names of the fe-
vera! objects, and the article COLOUR.

To dye fluff-, c5v. of an OLIVF. cchur. This muft be ordered
as the brimftone yellow, after which prepare fuds of calls and
copperas, but not ftrong ; through which pais the fluffs two or
three times, according a? you would have the dye lighter or deep-
er, and it will produce an Olive colour.

Jfaac OLIVER, was a famous limner, who flouriihed about
the larter end of the reign of queen Eliiabeth : He was eminent
both for hiftory and face painting, many pieces of which were
in the pofleffion of the late duke of Norfolk.; and, being a very
s;ood defiener, his drawings were finifhed to a mighty perfection :
fomeofthem being admirable copies after Parmegiano, &c. He
received fome light in that art from Frederico Zucchero, who
came into England in that reign. He was very neat and cu-
rious in his limpings, as may be feen by feveral hiftory pieces of
his in the queen's clofet. He was likewife a very good oil-pain-
ter in little.

He died, between fifty and forty, in king Charles the FirfPs
time, and was buried in Blaclc-fiiars, where there was a monu-
ment fet up for him, with his butt; all which has been deftroy-
ed bv fire.

Peter OLIVER, was the fon of the before-mentioned, who
had inilructed him in his art; he became exceeding- eminent in
miniature, infomuch that he outdid his father in portraits. He
drew king James I, prince Henry, prince Charles, and mo ft of
the court at that time. He lived to near fixty ; and was bu-
ried in the fame place with his father, about the year 1664.

ONYX, a precious flone, accounted a fpecies of opal.

Its colours are ufually white and black, which appear as di£»
tincl as if laid on by art.

There are fome brought from Arabia, mixed with a greyifh
hue, which, after taking off one lay or row, fhevv another un-
derneath of a different colour.

OPAL, is a precious ftone of various colours: In it are feen
the red of the ruby, the purple of the amethvft, the green of
the emerald, befides yellow, and fome black and white.

When this flone is broke, mod of thefe colours difappear;
which is a fign that they only arife, by reflection, from one or
two cr the principal ones.

It5 form is always either round or oval; its prevailing colour
white. The diversity of its colours makes it almoft of equal
value with the fapphire or ruby.