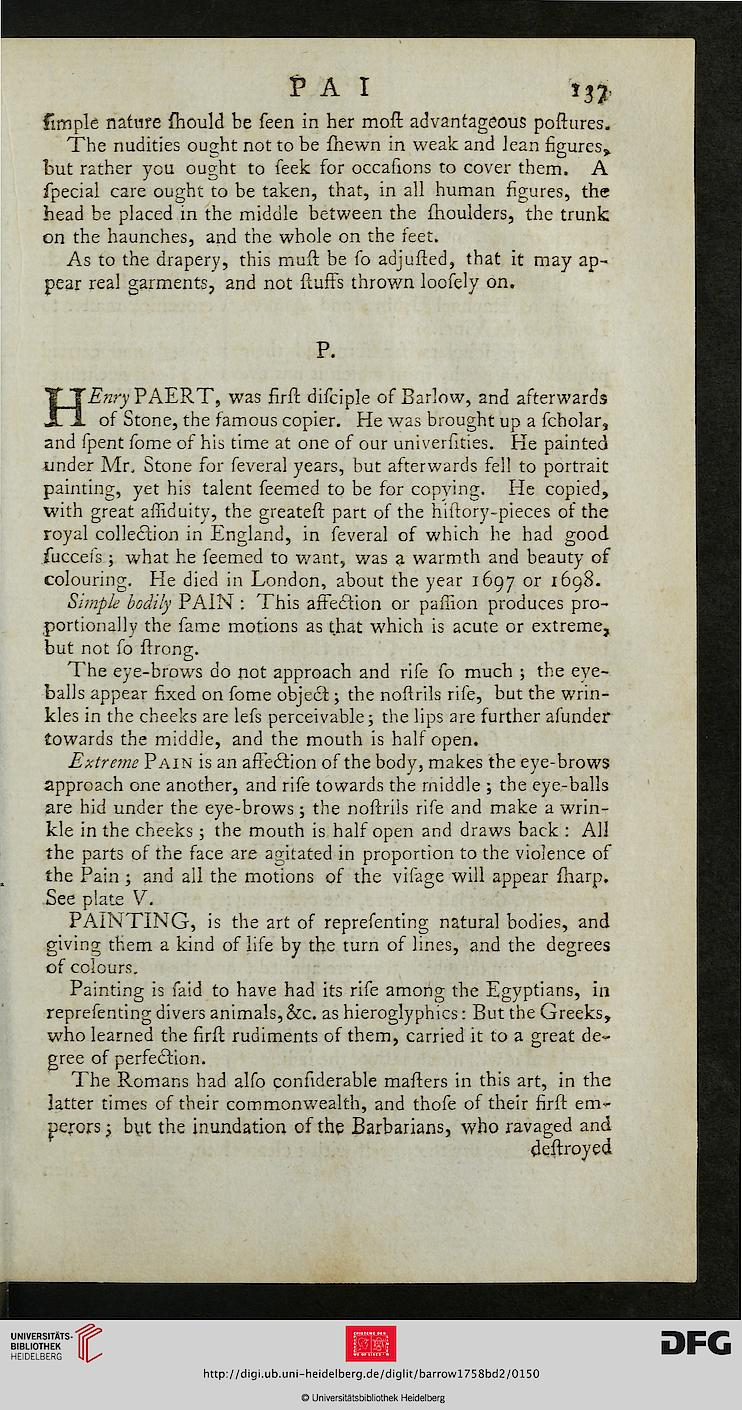 Information about OCR text
f A I tn

fimple nature fhould be feen in her mod advantageous poftures.

The nudities ought not to be fhewn in weak and lean figures.,
but rather you ought to feek for occafions to cover them. A
fpecial care ought to be taken, that, in all human figures, the
head be placed in the middle between the fhoulders, the trunk
on the haunches, and the whole on the feet.

As to the drapery, this mud be fo adjufted, that it may ap-
pear real garments, and not fluffs thrown loofely on.

HEnry PAERT, was fir ft difciple of Barlow, and afterwards
of Stone, the famous copier. He was brought up a fcholar,
and fpent fome of his time at one of our univerfities. Ke painted
under Mr, Stone for feveral years, but afterwards fell to portrait
painting, yet his talent feemed to be for copying. He copied,
with great afiiduity, the greater! part of the hiftory-pieces of the
royal collection in England, in feveral of which he had good
iucceis; what he feemed to want, was a warmth and beauty of
colouring. He died in London, about the year 1697 or 1698.

Simple bodily PAIN : This affection or paffion produces pro-
portionally the fame motions as that which is acute or extreme,
but not fo ftrong.

The eye-brows do not approach and rife fo much ; the eye-
balls appear fixed on fome object; the noftrils rife, but the wrin-
kles in the cheeks are lefs perceivable; the lips are further afunder
towards the middle, and the mouth is half open.

Extreme Pain is an affeclion of the body, makes the eye-brows
approach one another, and rife towards the middle ; the eye-balls
are hid under the eye-brows; the noftrils rife and make a wrin-
kle in the cheeks; the mouth is half open and draws back : All
the parts of the face are agitated in proportion to the violence of
the Pain ; and all the motions of the vifage will appear fharp.
See plate V.

PAINTING, is the art of reprefenting natural bodies, and
giving them a kind of life by the turn of lines, and the degrees
of colours.

Painting is faid to have had its rife among the Egyptians, in
reprefenting divers animals,&c. as hieroglyphics: But the Greeks,
who learned the firft rudiments of them, carried it to a great de-
gree of perfection.

The Romans had alfo confiderable mafters in this art, in the
latter times of their commonwealth, and thofe of their firft em-
pejrors; but the inundation of the Barbarians, who ravaged and