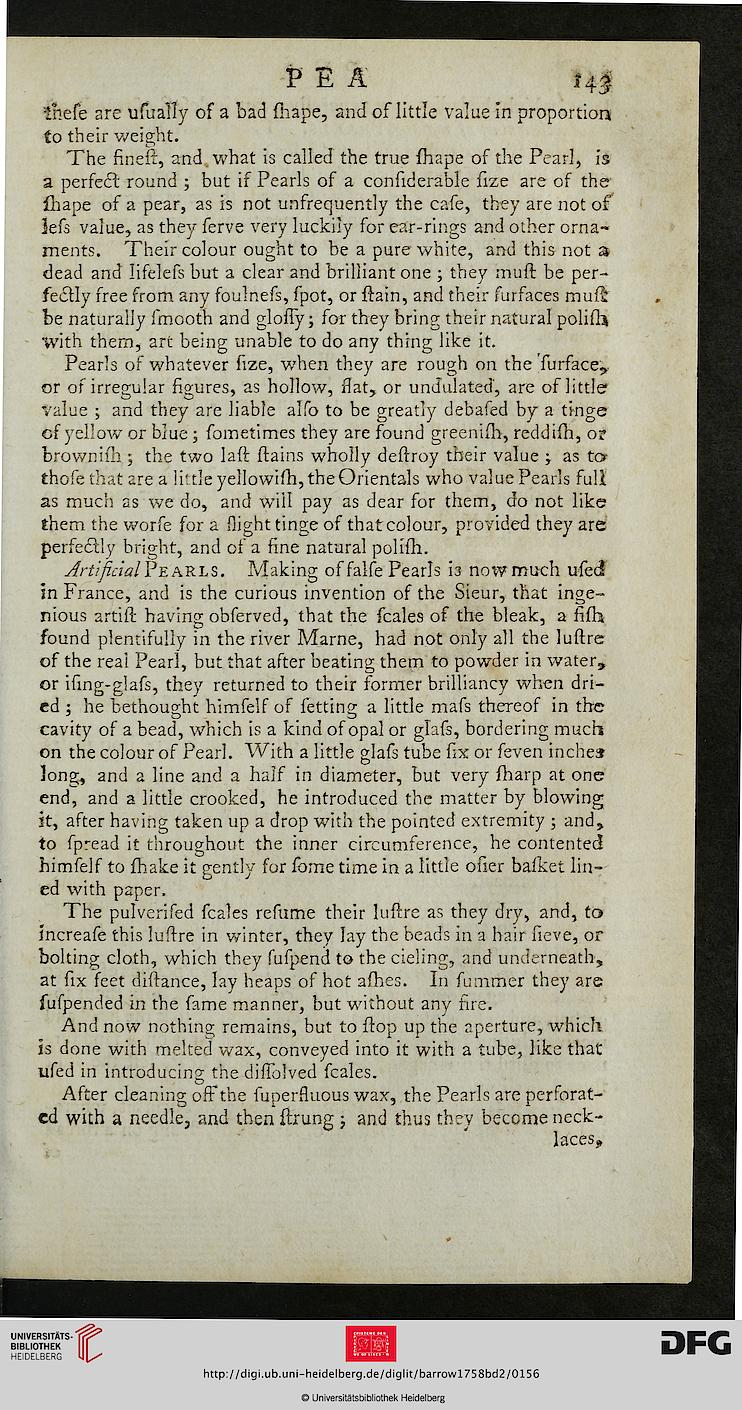 ihefe are ufuaiiy of a bad fhape, and of little value in proportion
to their weight.

The finer:, and . what is called the true fhape of the Pearl, is
a perfect round ; but if Pearls of a confiderable fize are of the
fhape of a pear, as is not unfrequently the cafe, they are not of
lefs value, as they ferve very luckily for ear-rings and other orna-
ments. Their colour ought to be a pure white, and this not a
dead and lifelefs but a clear and brilliant one ; they muff, be per-
fectly free from any fouinefs, fpot, or ftain, and their furfaces muft
be naturally fmooth and gloffy; for they bring their natural polifh
with them, art being unable to do any thing like it.

Pearls of whatever fize, when they are rough on the Turface^
or of irregular figures, as hollow, flat, or undulated, are of little
value ; and they are liable alfo to be greatly debafed by a tinge
cf yellow or blue ; fometimes they are found greenifh, reddifh, or
browniih ; the two laft ftains wholly deftroy their value ; as tor
thofe chat are a little ye3Iowifh,theOrientals who value Pearls full
as much as we do, and will pay as dear for them, do not like
them the worfe for a flight tinge of that colour, provided they are
perfectly bright, and of a fine natural polifh.

Artificial Pearls. Peaking of falfe Pearls i3 noivmuch ufecf
in France, and is the curious invention of the Sieur, that inge-
nious artift having obferved, that the fcales of the bleak, a fifh
found plentifully in the river Marne, had not only all the luftre
of the real Pearl, but that after beating them to powder in water,
or ifing-glafs, they returned to their former brilliancy when dri-
ed ; he bethought himfelf of fetting a little mafs thereof in the
cavity of a bead, which is a kind of opal or glafs, bordering much
on the colour of Pearl. With a little glafs tube fix or feven inches
long, and a line and a half in diameter, but very fharp at one
end, and a little crooked, he introduced the matter by blowing
it, after having taken up a drop with the pointed extremity ; and,
to fpread it throughout the inner circumference, he contented
himfelf to fhake it gently for fome time in a little ofier balket lin-
ed with paper.

The pulverifed fcales refume their luftre as they dry, and, to
increafe this luftre in winter, they lay the beads in a hair fieve, or
bolting cloth, which they fufpend to the cieling, and underneath,
at fix feet difbnee, lay heaps of hot afhes. In fummer they are
fufpended in the fame manner, but without any fire.

And now nothing remains, but to flop up the aperture, which
is done with melted wax, conveyed into it with a tube, like that
ufed in introducing the diffolved fcales.

After cleaning ofFthe fuperfluous wax, the Pearls are perforat-
ed with a needle, and then flrung; and thus they become neck-
laces,