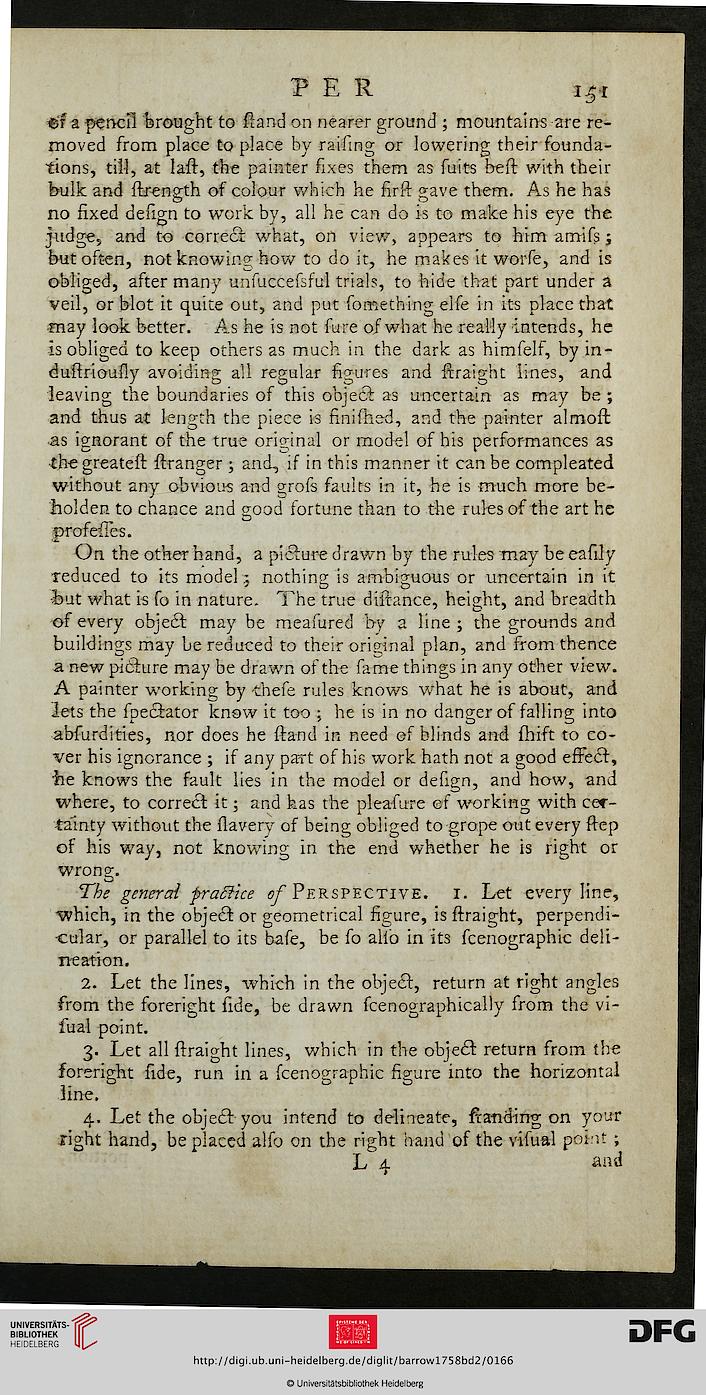 Information about OCR text
PER i5i

tir a pencil brought to (land on nearer ground ; mountains are re-
moved from place to place by railing or lowering their founda-
tions, til-l, at laft, the painter fixes them as fuits beft with their
bulk and ftrength of colour which he firft gave them. As he has
no fixed defign to work by, all he can do is to make his eye the.
judge, and to correct what, on view, appears to him amifs;
but often, not knowing how to do it, he makes it worfe, and is
obliged, after many unfuccefsful trials, to hide that part under a
veil, or blot it quite out, and put fomething elfe in its place that
may look better. As he is not fure of what he really intends, he
is obliged to keep others as much in the dark as himfelf, by in-
duftrioufly avoiding all regular figures and rtraight lines, and
leaving the boundaries of this object as uncertain as may be ;
and thus at length the piece is finifhed, and the painter alrnoft
as ignorant of the true original or model of his performances as
thegreateft ftranger ; and, if in this manner it can be compleated
without any obvious and grofs faults in it, he is much more be-
holden to chance and good fortune than to the rules of the art he
profeiTes.

On the other hand, a picture drawn by the rules may be eafily
reduced to its model ; nothing: is ambiguous or uncertain in it
but what is fo in nature. The true diitance, height, and breadth
of every object may be meafured by a line; the grounds and
buildings may be reduced to their original plan, and from thence
a new picture may be drawn of the fame things in any other view.
A painter working by thefe rules knows what he is about, and
Jets the fpectator know it too ; he is in no danger of falling into
abfurdities, nor does he ftand in need ef blinds and fhift to co-
ver his ignorance ; if any part of his work hath not a good effect,
be knows the fault lies in the model or defign, and how, and
where, to correct it; and has the pleafure ef working with cer-
tainty without the flavery of being obliged to grope out every ftep
of his way, not knowing in the end whether he is right or
wrong;.

The general practice of Perspective, i. Let every linr,
"which, in the object or geometrical figure, is ftraight, perpendi-
cular, or parallel to its bafe, be fo alio in its fcenographic deli-
neation.

2. Let the lines, which in the object, return at right angles
from the foreright fide, be drawn fcenographically from the vi-
fual point.

3. Let all firaight lines, which in the object return from the
foreright fide, run in a fcenographic figure into the horizontal
line.

4. Let the object you intend to delineate, franding on your
right hand, be placed alfo on the right hand of the vifual point ;