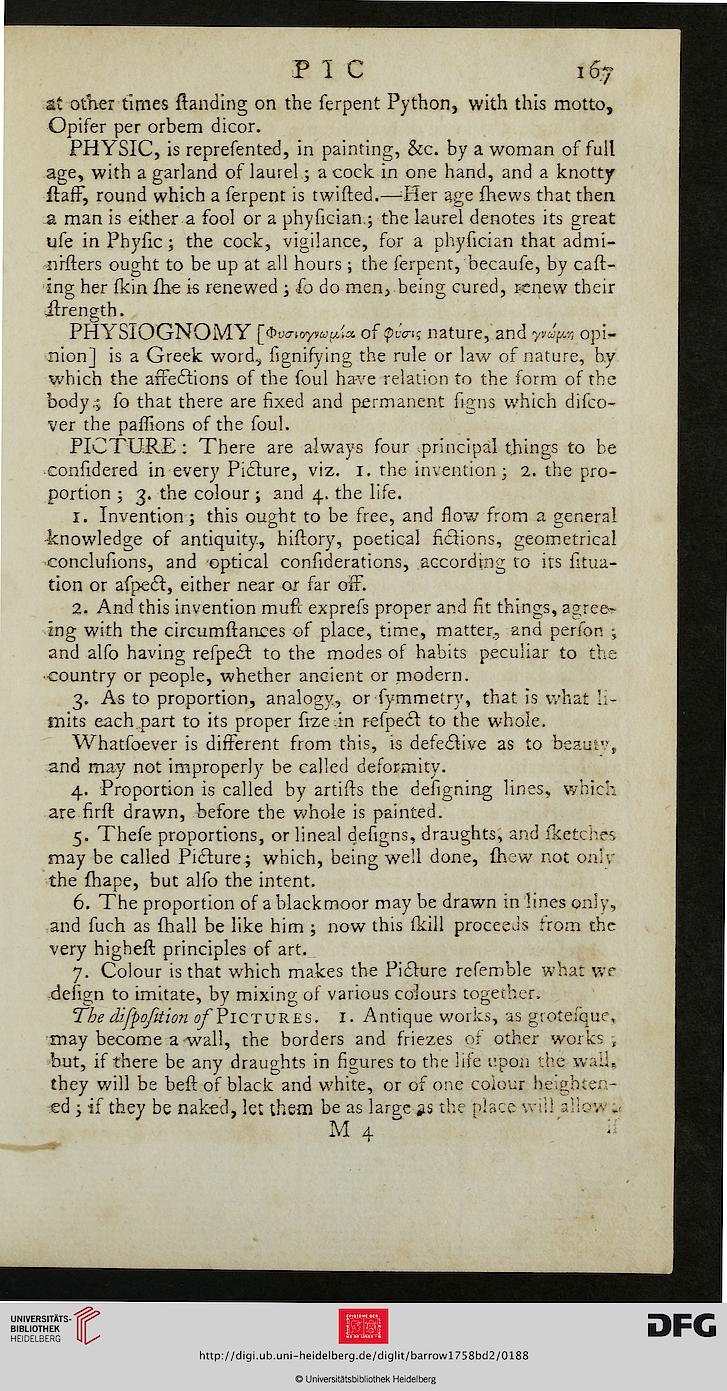 at other times {landing on the ferpent Python, with this motto,
Opifer per orbem dicor.

PHYSIC, is represented, in painting, &c. by a woman of full
age, with a garland of laurel 3 a cock in one hand, and a knotty
ftaff, round which a ferpent is twifted.—Her age fhevvs that then
a man is either a fool or a phyfician.; the laurel denotes its great
ufe in Phyfic ; the cock, vigilance, for a phyfician that admi-
nrfters ought to be up at all hours; the ferpent, becaufe, by call-
ing her fkin {he is renewed ; ib do men, being cured, renew their
itrength.

PHYSIOGNOMY [<D«noyv^U of pwns nature, and yiupa opi-
nion] is a Greek word, fignifying the rule or law of nature, by
which the affections of the foul have relation to the form of the
body.; fo that there are fixed and permanent figns which difco-
ver the paffions of the foul.

PICTURE : There are always four principal things to be
confidered in every Picture, viz. 1. the invention ; 2. the pro-
portion ; 3. the colour ; and 4. the life.

1. Invention; this ought to be free, and flow from a general
knowledge of antiquity, hiftory, poetical fictions, geometrical
conclufions, and optical confiderations, according to its iitua-
tion or afpect, either near or far ofF.

2. And this invention mufl exprefs proper and fit things, agree-
ing with the circumftances of place, time, matter, and perfon ;
and alfo having refpect to the modes of habits peculiar to the
•country or people, whether ancient or modern.

3. As to proportion, analogy, or fymmetry, that is what li-
mits each part to its proper frze.in refpecl to the whole.

Whatfoever is different from this, is defective as to beaut",
and may not improperly be called deformity.

4. Proportion is called by artifls the defigning lines, which
are firfl drawn, before the whole is painted.

5. Thefe proportions, or lineal defigns, draughts, and fket; hps
may be called Picture; which, being well done, {hew not on!
the fhape, but alfo the intent.

6. The proportion of a blackmoor may be drawn in lines only,
and fuch as fhall be like him ; now this (kill proceeds from the
very higheft principles of art.

7. Colour is that which makes the Picture refemble what we
defign to imitate, by mixing of various colours together;

The difpofition ©/"PICTURES. 1. Antique works, as grotesque,
may become a wall, the borders and friezes of other works,
but, if there be any draughts in figures to the life r.oon the wail,
they will be beft of black and white, or of one colour heightei -
«d ; if they be naked, let them be as large ?s tht place 1 II a - v ;