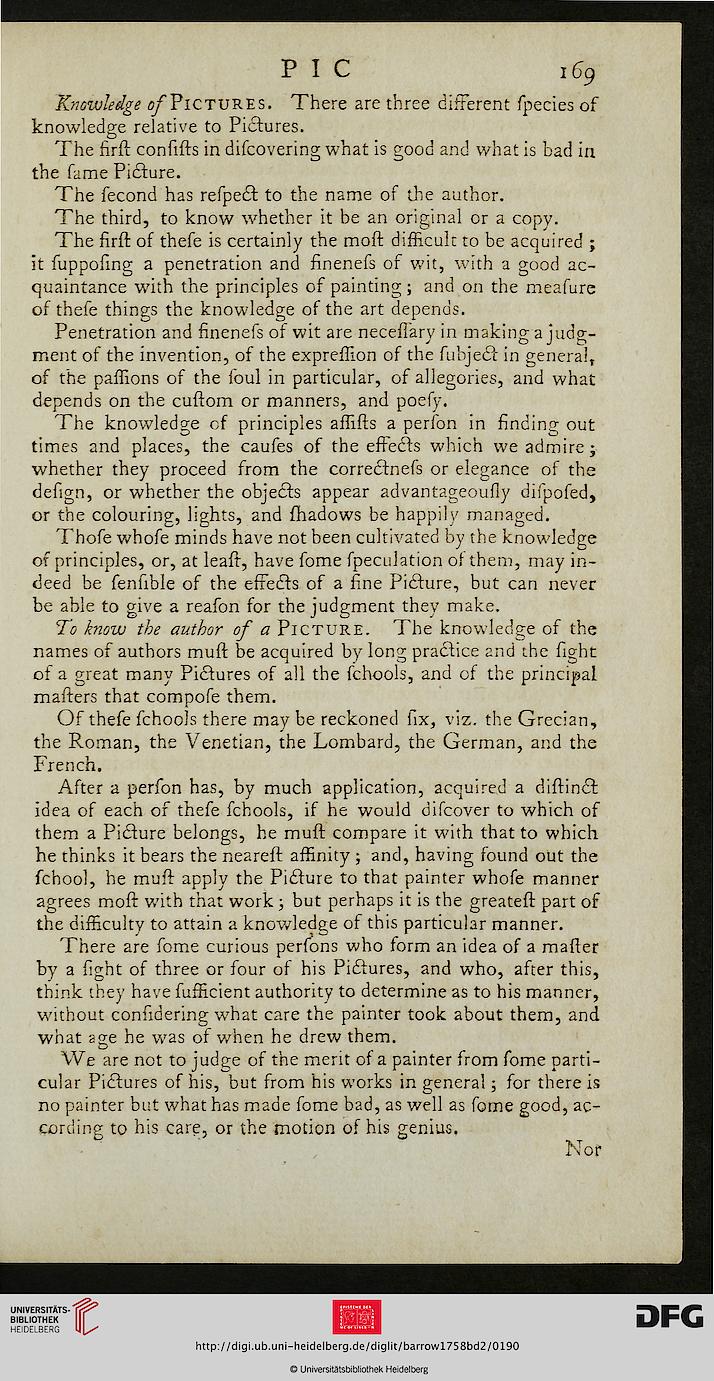 Information about OCR text
PIC i69

Knowledge of Pictures. There are three different fpecies of
knowledge relative to Pictures.

The firft confifts in difcovering what is good and what is bad in
the fame Picture.

The fecond has refpect to the name of the author.
The third, to know whether it be an original or a copy.
The firft of thefe is certainly the moft difficult to be acquired ;
it fuppofing a penetration and finenefs of wit, with a good ac-
quaintance with the principles of painting ; and on the meafure
of thefe things the knowledge of the art depends.

Penetration and finenefs of wit are neceffary in making a judg-
ment of the invention, of the expreffion of the fubject in genera!,
of the paffions of the foul in particular, of allegories, and what
depends on the cuftom or manners, and poefy.

The knowledge cf principles affifts a perfon in finding out
times and places, the caufes of the effects which we admire;
whether they proceed from the correctnefs or elegance of the
defign, or whether the objects appear advantageoufly difpofed,
or the colouring, lights, and fhadows be happily managed.

Thofe whofe minds have not been cultivated by the knowledge
of principles, or, at leaft, have fome fpeculation of them, may in-
deed be fenfible of the effects of a fine Picture, but can never
be able to give a reafon for the judgment they make.

To know the author of a Picture. The knowledge of the
names of authors muft be acquired by long practice and the fight
of a great many Pictures of all the fchools, and cf the principal
mafters that compofe them.

Of thefe fchools there may be reckoned fix, viz. the Grecian,
the Roman, the Venetian, the Lombard, the German, and the
French.

After a perfon has, by much application, acquired a diftinct
idea of each of thefe fchools, if he would difcover to which of
them a Picture belongs, he muft compare it with that to which
he thinks it bears the neareft affinity ; and, having found out the
fchool, he muft apply the Picture to that painter whofe manner
agrees moft with that work ; but perhaps it is the greateft part of
the difficulty to attain a knowledge of this particular manner.

There are fome curious perfons who form an idea of a maffer
by a fight of three or four of his Pictures, and who, after this,
think they have fufficient authority to determine as to his manner,
without confidering what care the painter took about them, and
what age he was of when he drew them.

We are not to judge of the merit of a painter from fome parti-
cular Pictures of his, but from his works in general; for there is
no painter but what has made fome bad, as well as fome good, ac-
cording to his care, or the motion of his genius.