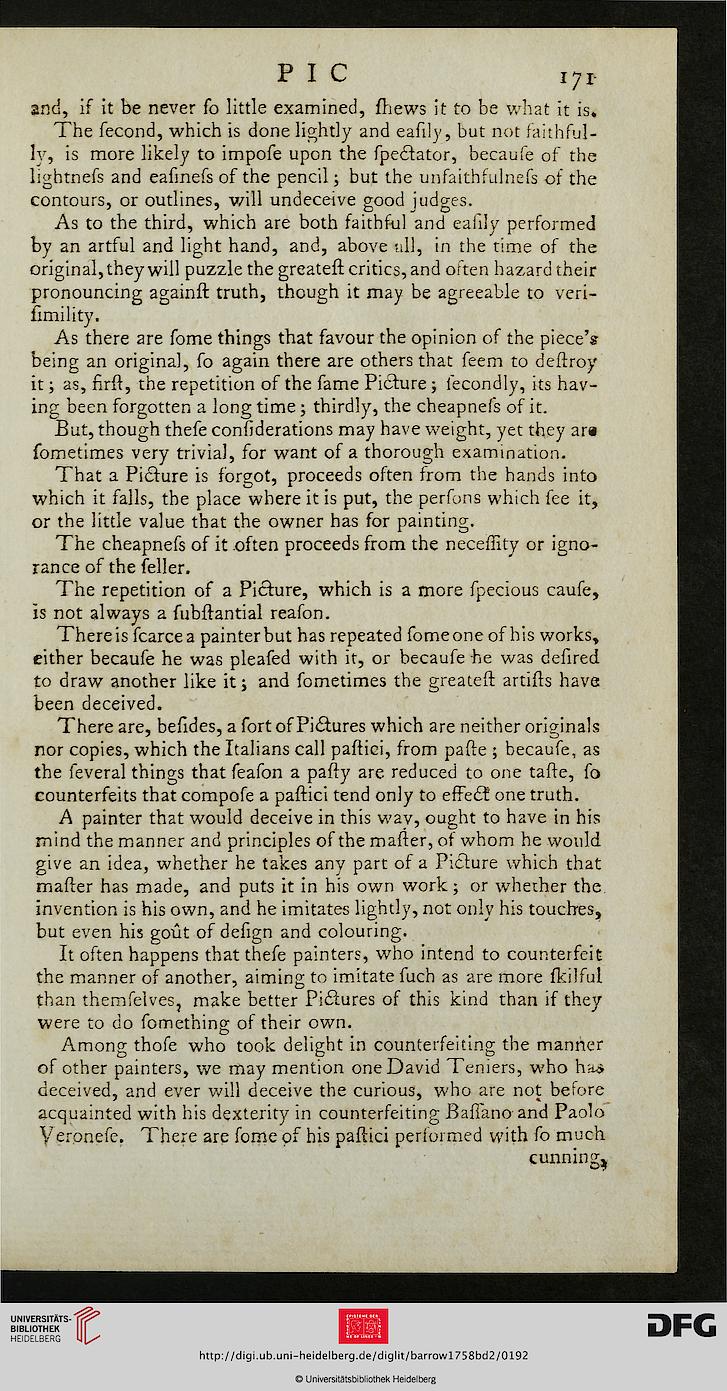 Information about OCR text
and, if it be never fo little examined, fhews it to be what it is.
The fecond, which is done lightly and eafily, but not faithful-
ly, is more likely to impofe upon the fpedtator, becaufe of the
lightnefs and eafinefs of the pencil; but the unfaithfulnefs of the
contours, or outlines, will undeceive good judges.

As to the third, which are both faithful and eafily performed
by an artful and light hand, and, above all, in the time of the
original, they will puzzle the greater! critics, and often hazard their
pronouncing againft truth, though it may be agreeable to veri-
fimility.

As there are fome things that favour the opinion of the piece's
being an original, fo again there are others that feem to deftroy
it; as, firft, the repetition of the fame Picture; fecondly, its hav-
ing been forgotten a long time ; thirdly, the cheapnefs of it.

But, though thefe confiderations may have weight, yet they ara
fometimes very trivial, for want of a thorough examination.

That a Picture is forgot, proceeds often from the hands into
which it falls, the place where it is put, the perfons which fee it,
or the little value that the owner has for painting.

The cheapnefs of it .often proceeds from the neceffity or igno-
rance of the feller.

The repetition of a Picture, which is a more fpecious caufe,
is not always a fubftantial reafon.

There is fcarcea painter but has repeated fome one of his works,
cither becaufe he was pleafed with it, or becaufe he was defired
to draw another like it; and fometimes the greateft artifls have
been deceived.

There are, befides, a fort of Pictures which are neither originals
nor copies, which the Italians call paftici, from pafte ; becaufe, as
the feveral things that feafon a pafty are reduced to one tafte, fo
counterfeits that compofe a paftici tend only to effect one truth.

A painter that would deceive in this wav, ought to have in his
mind the manner and principles of the mafter, of whom he would
give an idea, whether he takes anv part of a Picture which that
mafter has made, and puts it in his own work; or whether the
invention is his own, and he imitates lightly, not only his touches,
but even his gout of defign and colouring.

It often happens that thefe painters, who intend to counterfeit
the manner of another, aiming to imitate fuch as are more fkilful
than themfelves, make better Pictures of this kind than if they
were to do fomething of their own.

Among thofe who took delight in counterfeiting the manner
of other painters, we may mention one David Teniers, who has
deceived, and ever will deceive the curious, who are not before
acquainted with his dexterity in counterfeiting Bafia.no and Paolo
Veronefe. There are fome of his paftici performed with fo much