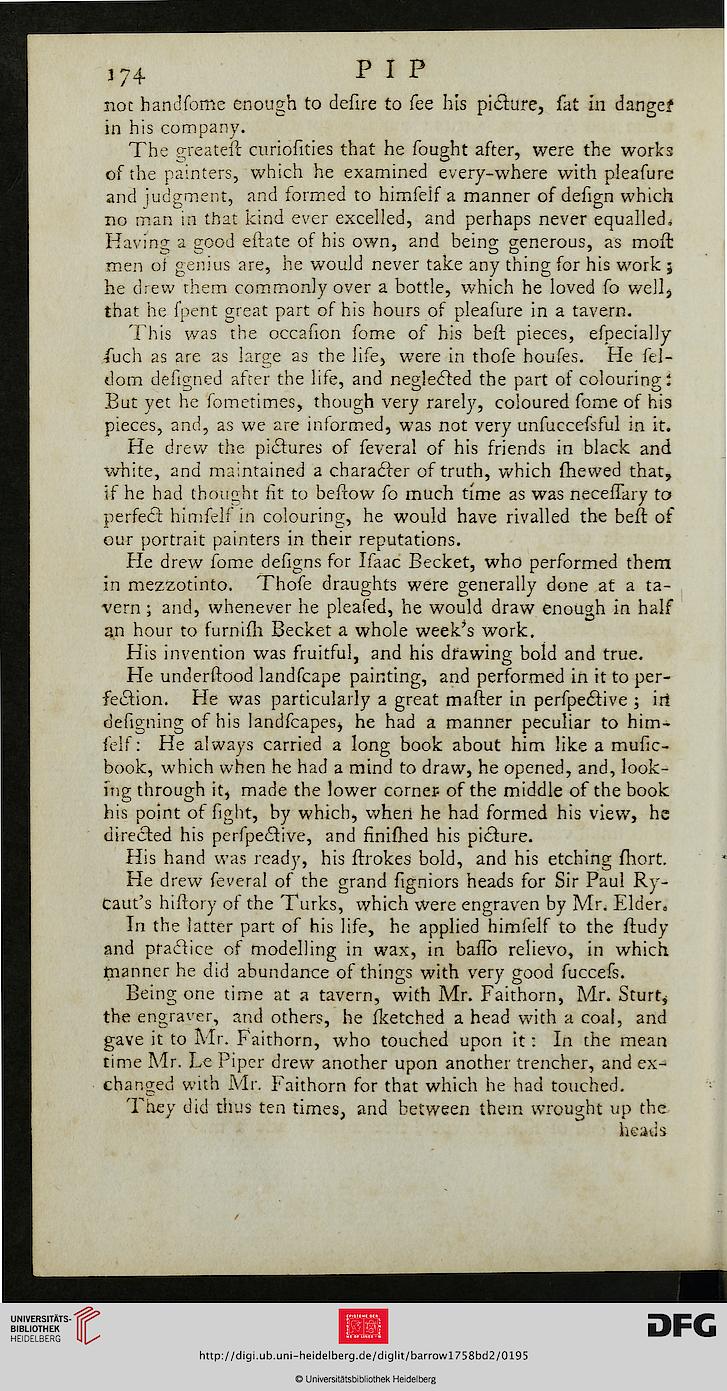 Information about OCR text
not handfome enough to defire to fee his picture, fat in dange?
in his company.

The greateft. curiofities that he fought after, were the works
of the painters, which he examined every-where with pleafure
and judgment, and formed to himfelf a manner of defign which
no man m that kind ever excelled, and perhaps never equalled,
Having a good eftate of his own, and being generous, as mofb
men of genius are, he would never take any thing for his work ;
he drew them commonly over a bottle, which he loved fo we)ls
that he fpefit great part of his hours of pleafure in a tavern.

This was the occafion fome of his beft. pieces, efpecially
fuch as are as large as the life, were in thofe houfes. He ftl-
dom defigned after the life, and neglected the part of colouring!
But yet he fometimes, though very rarely, coloured fome of his
pieces, and, as we are informed, was not very unfuccefsful in it.

He drew the pictures of feveral of his friends in black and
white, and maintained a character of truth, which {hewed that,
if he had thought fit to beflow fo much time as was neceflary to
perfect himfelf in colouring, he would have rivalled the beft of
our portrait painters in their reputations.

He drew fome defigns for Ifaac Becket, who performed them
in mezzotinto. Thofe draughts were generally done at a ta-
vern ; and, whenever he pleafed, he would draw enough in half
an hour to furnifh Becket a whole week's work.

His invention was fruitful, and his drawing bold and true.

He underftood landfcape painting, and performed in it to per-
fection. He was particularly a great matter in perfpective ; iri
defigning of his landfcapeSj he had a manner peculiar to him-
felf: He always carried a long book about him like a mufic-
book, which when he had a mind to draw, he opened, and, look-
ing through it, made the lower corner of the middle of the book
his point of fight, by which, when he had formed his view, he
directed his perfpective, and finifhed his picture.

His hand was ready, his firokes bold, and his etching fhort.

He drew feveral of the grand figniors heads for Sir Paul Ry-
caut's hiftory of the Turks, which were engraven by Mr. Elder,

In the latter part of his life, he applied himfelf to the ftudy
and practice of modelling in wax, in bafib relievo, in which
manner he did abundance of things with very good fuccefs.

Being one time at a tavern, with Mr. Faithorn, Mr. Sturt,
the engraver, and others, he fketched a head with a coal, and
gave it to Mr. Faithorn, who touched upon it : In the mean
time Mr. Le Piper drew another upon another trencher, and ex-
changed with Mr. Faithorn for that which he had touched.

They did thus ten times, and between them wrought up the