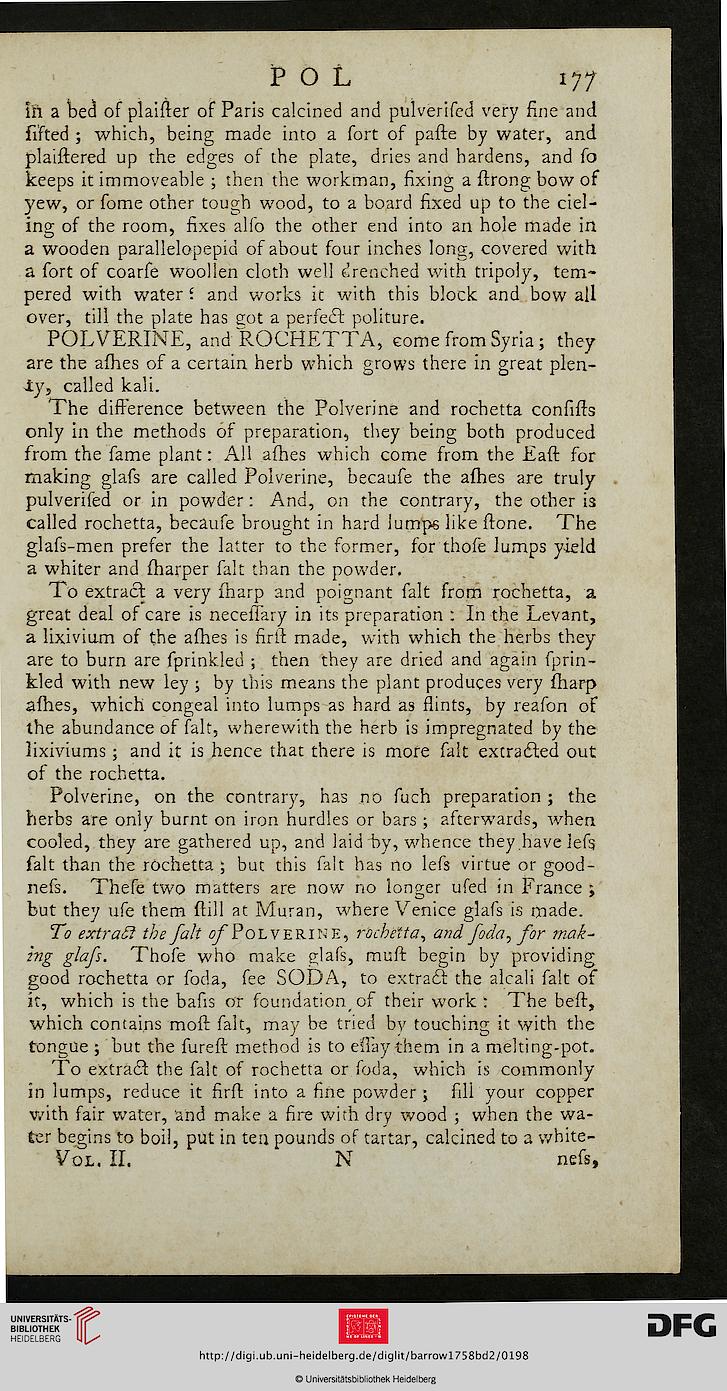 In a bed of plaifter of Paris calcined and pulverifcd very fine and
lifted ; which, being made into a fort of pafte by water, and
plaiftered up the edges of the plate, dries and hardens, and fo
keeps it immoveable ; then the workman, fixing a ftrong bow of
yew, or fome other tough wood, to a board fixed up to the del-
ing of the room, fixes alfo the other end into an hole made in
a wooden parallelopepid of about four inches long, covered with
a fort of coarfe woollen cloth well trenched with tripoly, tem-
pered with water ? and works it with this block and bow all
over, till the plate has sot a perfect politure.

POLVERINE, and ROCHETTA, come from Syria; they
are the afhes of a certain herb which grows there in great plen-
ty, called kali.

The difference between the Polverine and rochetta confifrs
only in the methods of preparation, they being both produced
from the fame plant: All afhes which come from the Eaft for
making glafs are called Polverine, becaufe the afhes are truly
pulverifed or in powder: And, on the contrary, the other i3
called rochetta, becaufe brought in hard lumps like ftone. The
glafs-men prefer the latter to the former, for thofe Jumps yield
a whiter and (harper fait than the powder.

To extract a very iharp and poignant fait from rochetta, a
great deal of care is neceffary in its preparation : In the Levant,
a lixivium of the afhes is firft. made, with which the herbs they
are to burn are fprinkled ; then they are dried and again fprin-
kled with new ley ; by this means the plant produces very fharp
afhes, which congeal into lumps as hard as flints, by reafon of
the abundance of fait, wherewith the herb is impregnated by the
lixiviums; and it is hence that there is more fait extracted out
of the rochetta.

Polverine, on the contrary, has no fuch preparation ; the
herbs are only burnt on iron hurdles or bars ; afterwards, when
cooled, they are gathered up, and laid by, whence they have iefs.
fait than the rochetta ; but this fait has no lefs virtue or good-
nefs. Thefe two matters are now no longer ufed in France ;
but they ufe them (till at Muran, where Venice glafs is made.

To extraol the fait of Polverine, rochetta, and foda, for mak-
ing gfofi' Thofe who make glafs, muft begin by providing
good rochetta or foda, fee SODA, to extract the alcali fait of
it, which is the bafis or foundation^ of their work : The bell,
which contains moft fait, may be tried bv touching it with the
tongue ; but the fureft method is to efiay them in a melting-pot.

To extract the fait of rochetta or foda, which is commonly
in lumps, reduce it firft into a fine powder \ fill your copper
with fair water, and make a fire with dry wood ; when the wa-
ter begins to boil, put in tea pounds of tartar, calcined to a vvhite-
. II. N nefs,