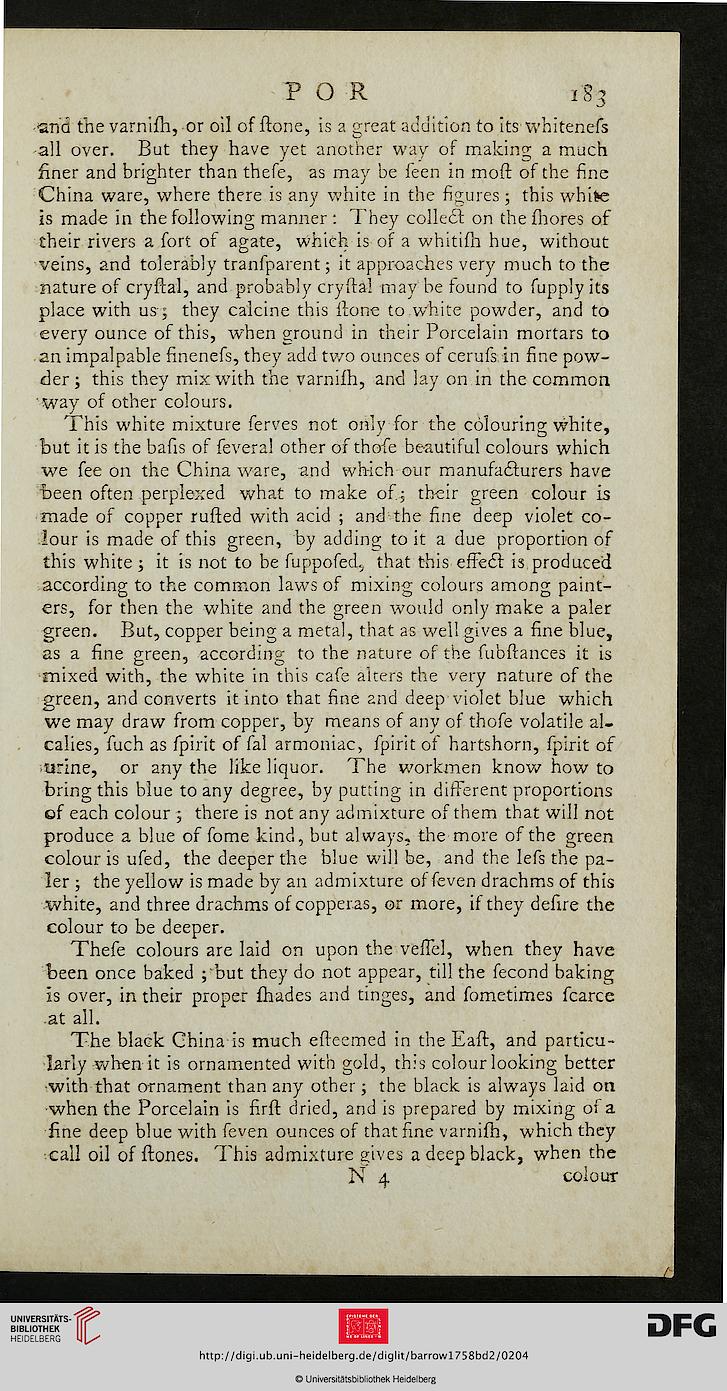 Information about OCR text
FOR 183

■and the varnifh, or oil of (tone, is a great addition to its whitenefs
all over. But they have yet another way of making a much
finer and brighter than thefe, as may be feen in moft of the fine
China ware, where there is any white in the figures ; this white
is made in the following manner : They collect on the mores of
their rivers a fort of agate, which is of a whitifh hue, without
veins, and tolerably tranfparent; it approaches very much to the
nature of cryftal, and probably cry ft a! may be found to fupply its
place with us ; they calcine this ftone to white powder, and to
every ounce of this, when ground in their Porcelain mortars to
an impalpable finenefs, they add two ounces of cerufs in fine pow-
der ; this they mix with the varnifh, and lay on in the common
Way of other colours.

This white mixture ferves not only for the colouring white,
but it is the bafis of feveral other of thofe beautiful colours which
we fee on the China ware, and which our manufacturers have
been often perplexed what to make of; their green colour is
made of copper rufted with acid ; and the fine deep violet co-
lour is made of this green, by adding to it a due proportion of
this white ; it is not to be fuppofed. that this effect is produced
according to the common laws of mixing colours among paint-
ers, for then the white and the green would only make a paler
green. But, copper being a metal, that as well gives a fine blue,
as a fine green, according to the nature of the fubftances it is
mixed with, the white in this cafe alters the very nature of the
green, and converts it into that fine and deep violet blue which
we may draw from copper, by means of any of thofe volatile al-
calies, fuch as fpirit of fal armoniac, fpirit of hartshorn, fpirit of
urine, or any the like liquor. The workmen know how to
bring this blue to any degree, by putting in different proportions
of each colour ; there is not any admixture of them that will not
produce a blue of fome kind, but always, the more of the green
colour is ufed, the deeper the blue will be, and the lefs the pa-
ler ; the yellow is made by an admixture of feven drachms of this
white, and three drachms of copperas, or more, if they defire the
colour to be deeper.

Thefe colours are laid on upon the vefTel, when they have
been once baked ;'but they do not appear, till the fecond baking
is over, in their proper fhades and tinges, and fometimes fcarce
at all.

The black China is much efteemed in the Eaff, and particu-
larly when it is ornamented with gold, this colour looking better
■with that ornament than any other; the black is always laid on
when the Porcelain is firft dried, and is prepared by mixing of a
fine deep blue with feven ounces of that fine varnifh, which they
call oil of (tones. This admixture gives a deep black, when the