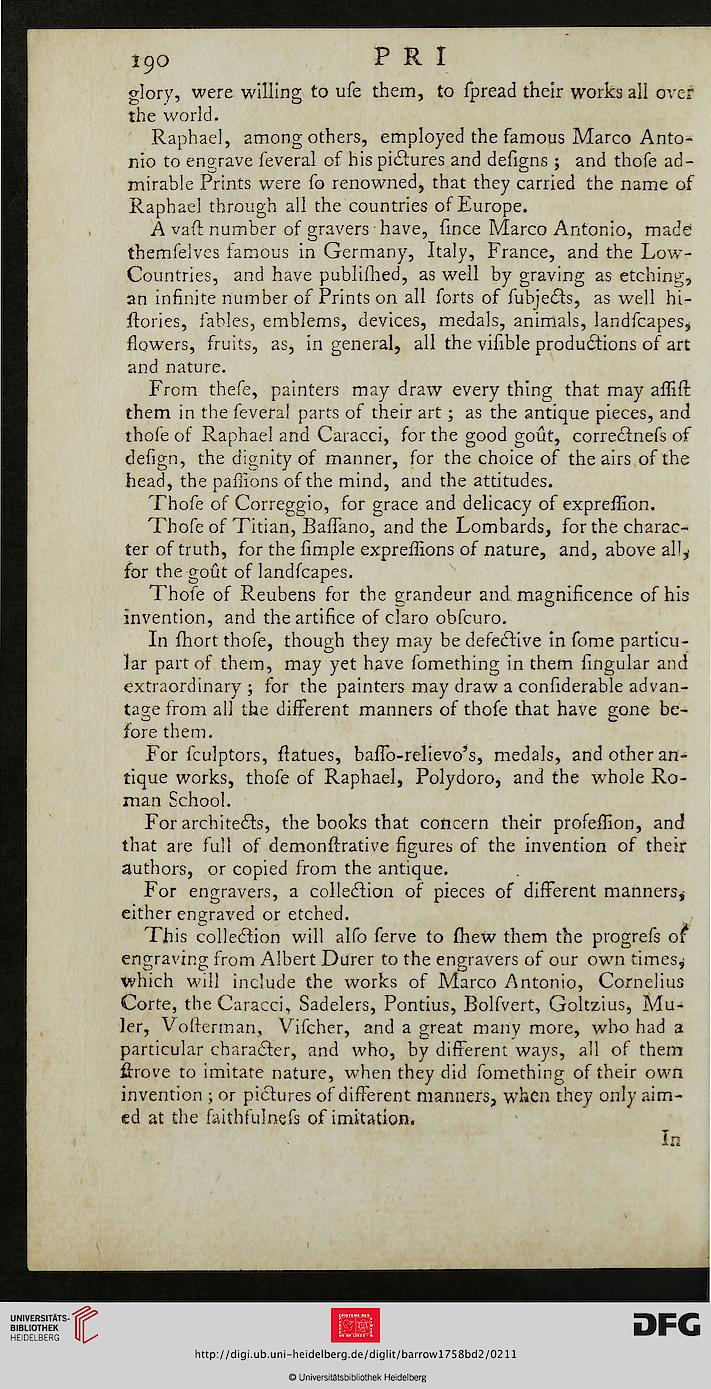 glory, were willing to ufe them, to fpread their works all over
the world.

Raphael, among others, employed the famous Marco Anto-
nio to engrave feveral of his pictures and defigns ; and thofe ad-
mirable Prints were fo renowned, that they carried the name of
Raphael through all the countries of Europe.

A vaft number of gravers have, fince Marco Antonio, made
themfelves famous in Germany, Italy, France, and the Low-
Countries, and have published, as well by graving as etching,
an infinite number of Prints on all forts of fubjects, as well hi-
itories, fables, emblems, devices, medals, animals, landfcapes,
flowers, fruits, as, in general, all the vifible productions of art
and nature.

From thefe, painters may draw every thing that may aflift
them in the feveral parts of their art; as the antique pieces, and
thofe of Raphael and Caracci, for the good gout, correcrnefs of
defign, the dignity of manner, for the choice of the airs of the
head, the paffions of the mind, and the attitudes.

Thofe of Correggio, for grace and delicacy of expreffion.

Thofe of Titian, Baflano, and the Lombards, for the charac-
ter of truth, for the fimple expreffions of nature, and, above ally
for the got) t of landfcapes.

Thofe of Reubens for the grandeur and magnificence of his
invention, and the artifice of claro obfcuro.

In fhort thofe, though they may be defective in fome particu-
lar part of them, may yet have fomething in them lingular and
extraordinary; for the painters may draw a confiderable advan-
tage from all the different manners of thofe that have gone be-
fore them.

For fculptors, flatues, baffo-relievo's, medals, and other an-
tique works, thofe of Raphael, Polydoro, and the whole Ro-
man School.

For architects, the books that concern their profeflion, and
that are full of demonftrative figures of the invention of their
authors, or copied from the antique.

For engravers, a collection of pieces of different manners^
either engraved or etched.

This collection will alfo ferve to fhew them the progrefs of*
engraving from Albert Durer to the engravers of our own times^
which will include the works of Marco Antonio, Cornelius
Corre, the Caracci, Sadelers, Pontius, Bolfvert, Goltzius, Mu-
ler, Vofterman, Vifcher, and a great many more, who had a
particular character, and who, by different ways, all of them
flxove to imitate nature, when they did fomething of their own
invention ; or pictures of different manners, when they only aim-
ed at the faithfulnefs of imitation.