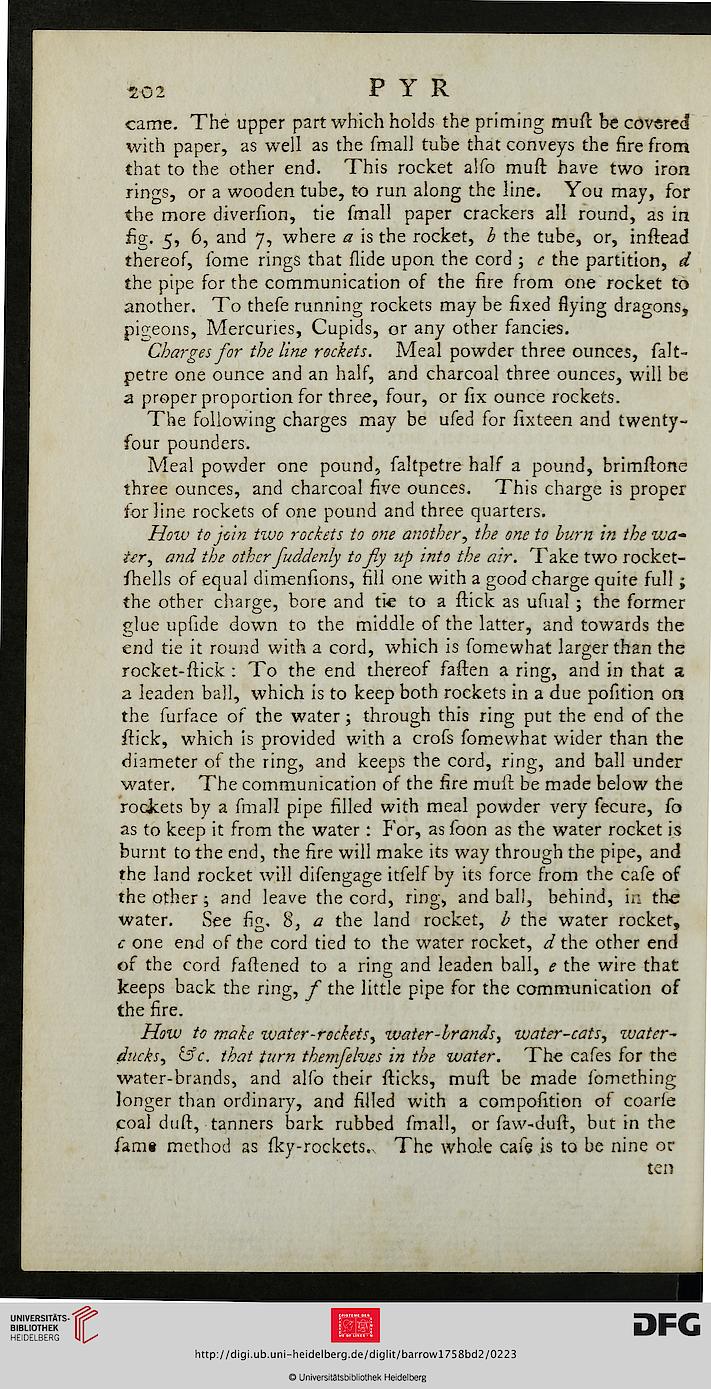 came. The upper part which holds the priming muil be covered
with paper, as well as the fmall tube that conveys the fire from
that to the other end. This rocket alfo muft have two iron
rings, or a wooden tube, to run along the line. You may, for
the more diverfion, tie fmall paper crackers all round, as in
fig. 5, 6, and 7, where a is the rocket, b the tube, or, inftead
thereof, fome rings that Aide upon the cord ; c the partition, d
the pipe for the communication of the fire from one rocket to
another. To thefe running rockets may be fixed flying dragons,
picreons, Mercuries, Cupids, or any other fancies.

Charges for the line rockets. Meal powder three ounces, falt-
petre one ounce and an half, and charcoal three ounces, will be
a proper proportion for three, four, or fix ounce rockets.

The following charges may be ufed for fixteen and twenty-
four pounders.

Meal powder one pound, faltpetre half a pound, brimftone
three ounces, and charcoal five ounces. This charge is proper
for line rockets of one pound and three quarters.

Hoiv to join two rockets to one another, the one to burn in the wa-
ter, and the other fuddenly tofly up into the air. Take two rocket-
fhells of equal dimenfions, fill one with a good charge quite full ;
the other charge, bore and tie to a ftick as ufual ; the former
glue upfide down to the middle of the latter, and towards the
end tie it round with a cord, which is fomewhat larger than the
rocket-flick : To the end thereof faften a ring, and in that a
a leaden ball, which is to keep both rockets in a due pofition on
the furface of the water ; through this ring put the end of the
flick, which is provided with a crofs fomewhat wider than the
diameter of the ring, and keeps the cord, ring, and ball under
water. The communication of the fire mull: be made below the
rockets by a fmall pipe filled with meal powder very fecure, fo
as to keep it from the water: For, as loon as the water rocket is
burnt to the end, the fire will make its way through the pipe, and
the land rocket will difengao-e itfelf bv its force from the cafe of
the other ; and leave the cord, ring, and ball, behind, in the
water. See fig, 8, a the land rocket, b the water rocket,
c one end of the cord tied to the water rocket, d the other end
of the cord fattened to a ring and leaden ball, e the wire that
keeps back the ring, f the little pipe for the communication of
the fire.

How to make water-rockets, water-brands, water-cats, water-
ducks, iffc. that turn thettifelves in the water. The cafes for the
water-brands, and alfo their fticks, muft be made fomething
longer than ordinary, and filled with a compofition of coade
coal duft, tanners bark rubbed fmall, or faw-dufr, but in the
famt method as fky-rockets.. The whole cafe is to be nine or