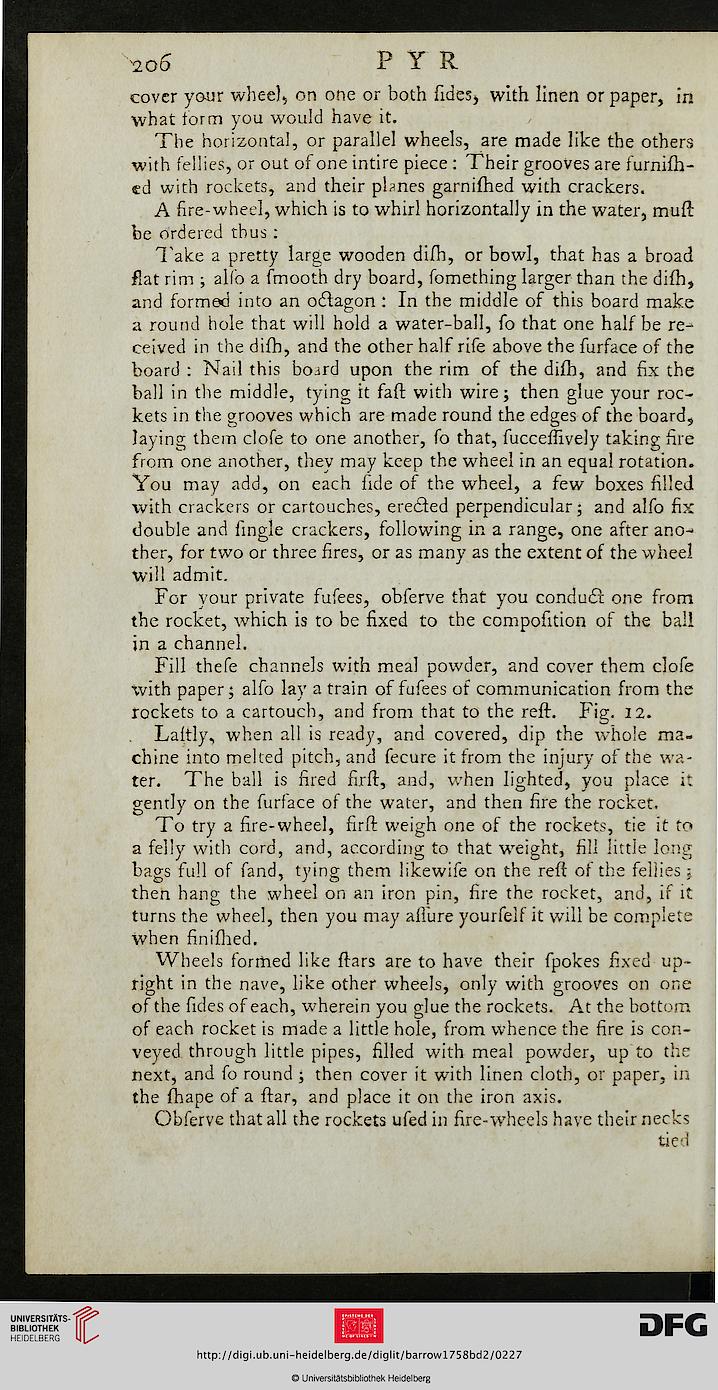 cover yo-ur wheel, on one or both fides, with linen or paper, in
what form you would have it.

The horizontal, or parallel wheels, are made like the others
with fellies, or out of one intire piece : Their grooves are furnifh-
ed with rockets, and their ptanes garnifhed with crackers.

A fire-wheel, which is to whirl horizontally in the water, mud
be ordered thus :

Take a pretty large wooden difh, or bowl, that has a broad
flat rim ; alio a fmooth dry board, fomething larger than the difh,
and formed into an oclagon : In the middle of this board make
a round hole that will hold a water-ball, fo that one half be re-
ceived in the difh, and the other half rife above the furface of the
board : Nail this board upon the rim of the difh, and fix the
ball in the middle, tying it fall: with wire; then glue your roc-
kets in the grooves which are made round the edges of the board,
laying them clofe to one another, fo that, fucceffively taking fire
from one another, they may keep the wheel in an equal rotation.
You may add, on each fide of the wheel, a few boxes filled
with crackers or cartouches, erected perpendicular; and alfo fix
double and fingle crackers, following in a range, one after ano-
ther, for two or three fires, or as many as the extent of the wheel
will admit.

For your private fufees, obferve that you conduct one from
the rocket, which is to be fixed to the compofition of the ball
in a channel.

Fill thefe channels with meal powder, and cover them clofe
with paper; alfo lay a train of fufees of communication from the
rockets to a cartouch, and from that to the reft. Fig. 12.

Laftly, when all is ready, and covered, dip the whole ma-
chine into melted pitch, and fecure it from the injury of the wa-
ter. The ball is fired firfl, and, when lighted, you place it
gently on the furface of the water, and then fire the rocket.

To try a fire-wheel, firft weigh one of the rockets, tie it to
a felly with cord, and, according to that weight, fill little long
bags full of fand, tying them likewife on the reft of the fellies \
then hang the wheel on an iron pin, fire the rocket, and, ir it
turns the wheel, then you may allure yourfelf it will be complete
when finifhed.

Wheels formed like ftars are to have their fpokes fixed up-
right in the nave, like other wheels, only with grooves on one
of the fides of each, wherein you glue the rockets. At the bote
of each rocket is made a little hole, from whence the fire is con-
veyed through little pipes, filled with meal powder, up to the
next, and fo round ; then cover it with linen cloth, or paper, in
the fhape or a ftar, and place it on the iron axis.