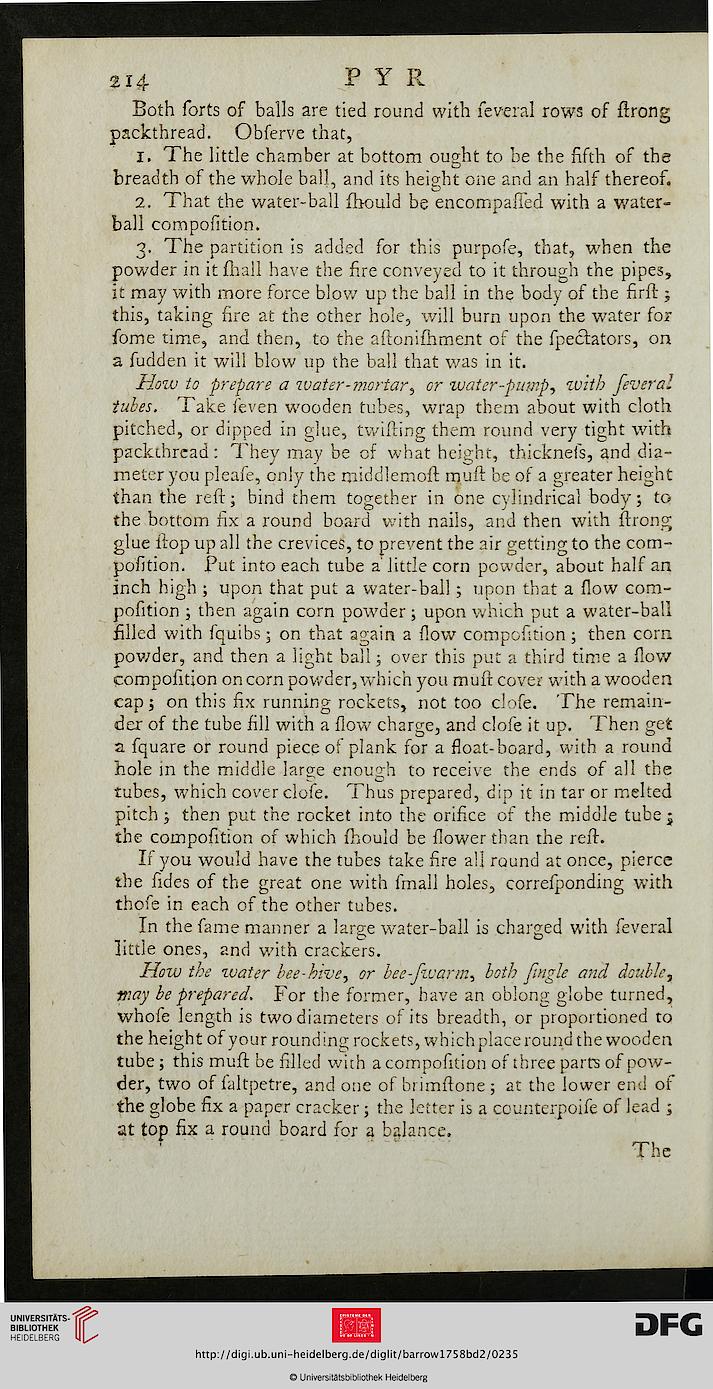 Both forts of balls are tied round with federal rows of ftrong
packthread. Obferve that,

1. The little chamber at bottom ought to be the fifth of the
breadth of the whole ball, and its height one and an half thereof.

3. The partition is added for this purpofe, that, when the
powder in itfhall have the fire conveyed to it through the pipes,
it may with more force blow up the ball in the body of the firft;
this, taking fire at the ether hole, will burn upon the water for
fome time, and then, to the aftonimment of the fpectators, on
a fudden it will blow up the ball that was in it.

How to prepare a water-mortar, or water-pump, with feveral
tubes. Take feven wooden tubes, wrap them about with cloth
pitched, or dipped in glue, twilling them round very tight with
packthread: They may be of what height, thicknefs, and dia-
meter you pleafe, only the middlemoft muft be of a greater height
than the reft; bind them together in one cylindrical body; to
the bottom fix a round board with nails, and then with ftrong;
glue flop up all the crevices, to prevent the air getting to the com-
pofition. Put into each tube a little corn powder, about half an
inch high ; upon that put a water-ball; upon that a flow com-
pofition ; then again corn powder; upon which put a water-ball
filled with fquibs; on that again a flow compofition; then corn
powder, and then a light ball; over this put a third time a flow
compofition on corn powder, which you muft cover with a wooden
cap; on this fix running rockets, not too clofe. The remain-
der of the tube fill with a flow charge, and clofe it up. Then get
a fquare or round piece of plank for a float-board, with a round
hole m the middle large enough to receive the ends of all the
tubes, which cover clofe. Thus prepared, dip it in tar or melted
pitch ; then put the rocket into the orifice of the middle tube j
the compofition of which fhould be flower than the reft.

If you would have the tubes take fire a!} round at once, pierce
the fides of the great one with fmall holes, correfponding with
thofe in each of the other tubes.

In the fame manner a large water-ball is charged with feveral
little ones, and with crackers.

How the zvater bee-hive, or bee-fiuarm, both [ingle and double,
may be prepared. For the former, have an oblong globe turned,
whofe length is two diameters of its breadth, or proportioned to
the height of your rounding rockets, which place round the wooden
tube ; this muft be filled with a compofition of three parrs of pow-
der, two of faltpetre, and one of brimftone ; at the lower end of
the globe fix a paper cracker; the letter is a ceunterpoife of lead ;
at top fix a round board for a balance.