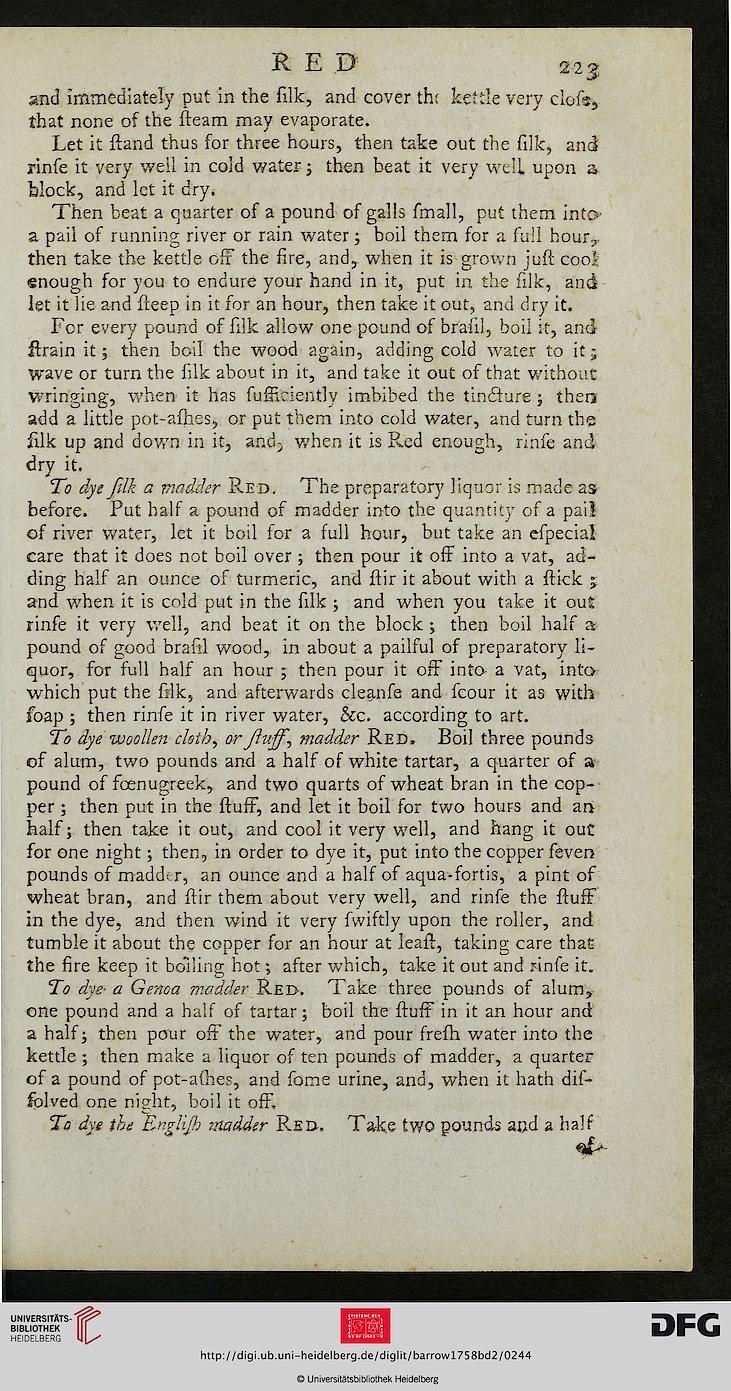 and immediately put in the filk, and cover the kettle very clofe,
that none of the fleam may evaporate.

Let it ffand thus for three hours, then take out the filk, and
rinfe it very weil in cold water; then beat it very well upon a
block, and let it dry.

Then beat a quarter of a pound of galls fmall, put them into
a pail of running river or rain water; boil them for a full hour?
then take the kettle off the fire, and, when it is grown juft cool
enough for you to endure your hand in it, put in the filk, and
let it lie and ileep in it for an hour, then take it out, and dry it.

For every pound of filk allow one pound of brail!, boil it, and
ftrain it; then boil the wood again, adding cold water to it;
wave or turn the filk about in it, and take it out of that without
wringing, when it has fufEciently imbibed the tincture j then
add a little pot-afhes, or put them into cold water, and turn the
filk up and down in it, and; when it is Red enough, rinfe and
dry it.

To dye filk a madder Red. The preparatory liquor is made as
before. Put half a pound of madder into the quantity of a pail
of river water, let it boil for a full hour, but take an efpecial
care that it does not boil over ; then pour it off into a vat, ad-
ding half an ounce of turmeric, and ftir it about with a ftick ;
and when it is cold put in the filk ; and when you take it out
rinfe it very well, and beat it on the block ; then boil half a
pound of good brafil wood, in about a pailful of preparatory li-
quor, for full half an hour ; then pour it off into a vat, into
which put the filk, and afterwards cleanfe and fcour it as with
foap ; then rinfe it in river water, &c. according to art.

To dye woollen cloth, or fluff-, madder Red. Boil three pounds
of alum, two pounds and a half of white tartar, a quarter of a
pound of foenugreek, and two quarts of wheat bran in the cop-
per ; then put in the fluff, and let it boil for two hours and an
half; then take it out, and cool it very well, and hang it out
for one night 5 then, in order to dye it, put into the copper feven
pounds of madd; r, an ounce and a half of aqua-fortis, a pint of
wheat bran, and ffir them about very well, and rinfe the fluff
in the dye, and then wind it very fwiftly upon the roller, and
tumble it about the copper for an hour at leaf}, taking care that
the fire keep it boiling hot; after which, take it out and rinfe it.

To dye- a Genoa madder Red. Take three pounds of alum,
one pound and a half of tartar; boil the fluff in it an hour and
a half; then pour off the water, and pour frefh water into the
kettle ; then make a liquor of ten pounds of madder, a quarter
of a pound of pot-afhes, and fome urine, and, when it hath dif-
fblved one night, boil it off.

To dye the EnglijJj madder Red. Take two pounds and a half