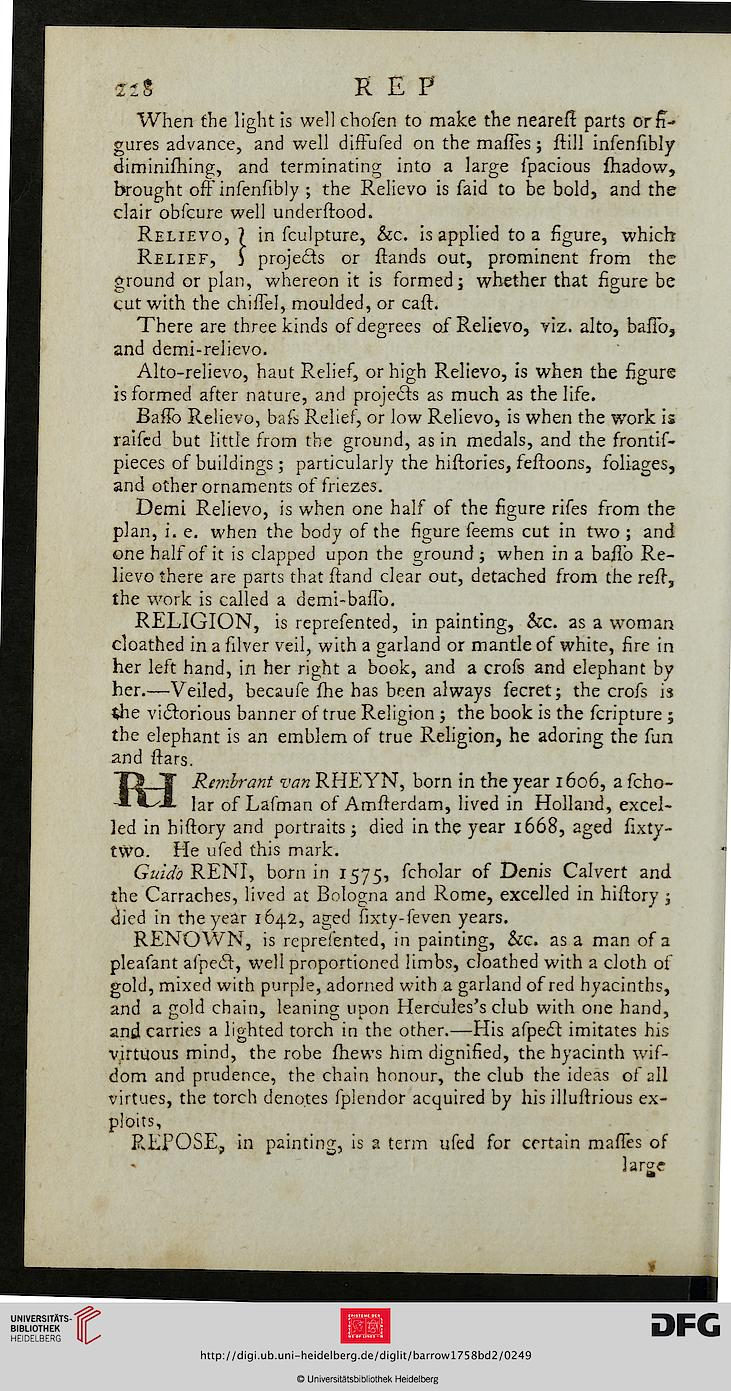 Relievo, ? in fculpture, &c. is applied to a figure, which

Relief, 5 projects or {lands out, prominent from the
ground or plan, whereon it is formed; whether that figure be
cut with the chiJTel, moulded, or caft.

There are three kinds of degrees of Relievo, viz. alto, bafFo,
and demi-relievo.

Alto-relievo, haut Relief, or high Relievo, is when the figure
is formed after nature, and projects as much as the life.

Baffo Relievo, bafs Relief, or low Relievo, is when the wTork is
raifed but little from the ground, as in medals, and the frontif-
pieces of buildings; particularly the hiftories, fefloons, foliages,
and other ornaments of friezes.

Demi Relievo, is when one half of the figure rifes from the
plan, i. e. when the body of the figure feems cut in two ; and
one half of it is clapped upon the ground ; when in a bajlb Re-
lievo there are parts that ftand clear out, detached from the reft,
the work is called a demi-bafTo.

RELIGION, is reprefented, in painting, &c. as a woman
cloathed in a filver veil, with a garland or mantle of white, fire in
her left hand, in her right a book, and a crofs and elephant by
her.—Veiled, becaufe fhe has been always fecret; the crofs is
the victorious banner of true Religion ; the book is the fcripture ;
the elephant is an emblem of true Religion, he adoring the fun
and ftars.

mRembrant van RHEYN, born in the year 1606, a fcho-
lar of Lafman of Amfferdam, lived in Holland, excel-
led in hiftory and portraits; died in the year 1668, aged fixty-
two. He ufed this mark.

Guido RENI, born in 1575, fcholar of Denis Calvert and
the Carraches, lived at Bologna and Rome, excelled in hiftory ;
died in the year 1642, aged fixty-feven years.

RENOWN, is reprefented, in painting, &c. as a man of a
pleafant afpecl:, well proportioned limbs, cloathed with a cloth of
gold, mixed with purple, adorned with a garland of red hyacinths,
and a gold chain, leaning upon Hercules's club with one hand,
and carries a lighted torch in the other.—His afpecl imitates his
virtuous mind, the robe fhews him dignified, the hyacinth wif-
dom and prudence, the chain honour, the club the ideas of all
virtues, the torch denotes fplendor acquired by his illuftrious ex-
ploits,

REPOSE, in painting, is a term ufed for certain mafTes of