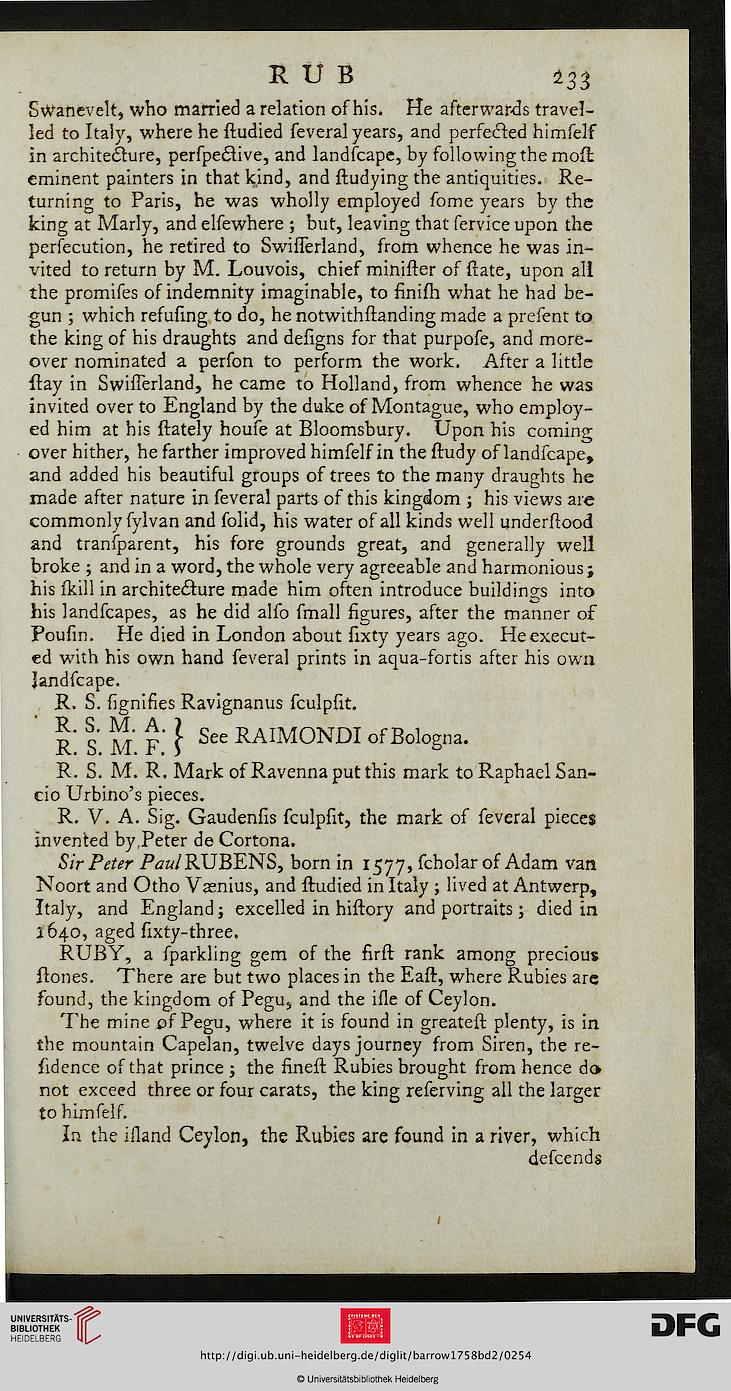 Swanevelt, who married a relation of his. He afterwards travel-
led to Italy, where he ftudied feveral years, and perfected himfelf
in architecture, perfpec-tive, and landscape, by following the moft
eminent painters in that kind, and ftudying the antiquities. Re-
turning to Paris, he was wholly employed fome years by the
king at Marly, and elfewhere ; but, leaving that fervice upon the
perfecution, he retired to Swifferland, from whence he was in-
vited to return by M. Louvois, chief minifter of ftate, upon all
the prcmifes of indemnity imaginable, to finifti what he had be-
gun ; which refufing to do, he notwithstanding made a prefent to
the king of his draughts and defigns for that purpofe, and more-
over nominated a perfon to perform the work. After a little
flay in Swifferland, he came to Holland, from whence he was
invited over to England by the duke of Montague, who employ-
ed him at his ftately houfe at Bloomsbury. Upon his coming
over hither, he farther improved himfelf in the ftudy of landfcape,
and added his beautiful groups of trees to the many draughts he
made after nature in feveral parts of this kingdom ; his views are
commonly fylvan and folid, his water of all kinds well underftood
and transparent, his fore grounds great, and generally well
broke ; and in a word, the whole very agreeable and harmonious;
his fkill in architecture made him often introduce buildings into
his landfcapes, as he did alfo fmall figures, after the manner of
Poufin. He died in London about fixty years ago. Heexecut-
ed with his own hand feveral prints in aqua-fortis after his own
Jandfcape.

Sir Peter Paul RUBENS, born in 1577, fcholar of Adam van
Noort and Otho Vaenius, and ftudied in Italy ; lived at Antwerp,
Italy, and England; excelled in hiftory and portraits; died in
1640, aged fixty-three.

RUBY, a fparkling gem of the firft rank among precious
ftones. There are but two places in the Eaft, where Rubies are
found, the kingdom of Pegu, and the ifle of Ceylon.

The mine pf Pegu, where it is found in greateft plenty, is in
the mountain Capelan, twelve days journey from Siren, the re-
fidence of that prince ; the fineft Rubies brought from hence do
not exceed three or four carats, the king referving all the larger
to himfelf.

In the ifland Ceylon, the Rubies are found in a river, which