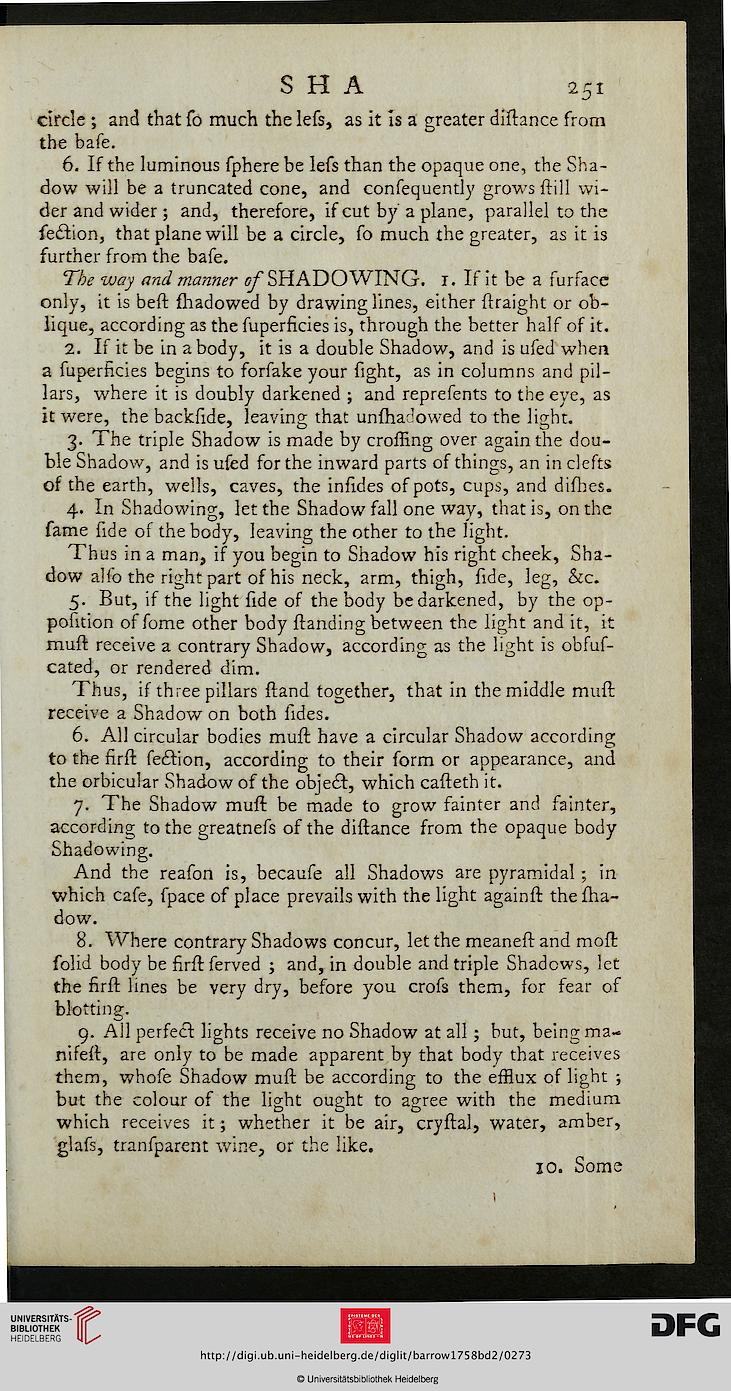 circle ; and that fo much the lefs, as it is a greater diftance from
the bafe.

6. If the luminous fphere be lefs than the opaque one, the Sha-
dow will be a truncated cone, and confequently grows frill wi-
der and wider; and, therefore, if cut by a plane, parallel to the
lection, that plane will be a circle, fo much the greater, as it is
further from the bafe.

The way and manner of SHADOWING. 1. If it be a furfacc
only, it is belt fhadowed by drawing lines, either ftraight or ob-
lique, according as the fuperficies is, through the better half of it.

2. If it be in a body, it is a double Shadow, and is ufed when
a fuperficies begins to forfake your fight, as in columns and pil-
lars, where it is doubly darkened ; and reprefents to the eye, as
it were, the backfide, leaving that unfhadowed to the light.

3. The triple Shadow is made by croffing over again the dou-
ble Shadow, and is ufed for the inward parts of things, an in clefts
of the earth, wells, caves, the infides of pots, cups, and difhes.

4. In Shadowing, let the Shadow fall one way, that is, on the
fame fide of the body, leaving the other to the light.

Thus in a man, if you begin to Shadow his right cheek, Sha-
dow alio the right part of his neck, arm, thigh, fide, leg, &c.

5. But, if the light fide of the body be darkened, by the op-
pohtion of fome other body ftanding between the light and it, it
muft receive a contrary Shadow, according as the light is obfuf-
cated, or rendered dim.

Thus, if three pillars ftand together, that in the middle mull
receive a Shadow on both fides.

6. AH circular bodies muff, have a circular Shadow according
to the firft fecTion, according to their form or appearance, and
the orbicular Shadow of the object, which cafteth it.

7. The Shadow muft be made to grow fainter and fainter,
according to the greatnefs of the diftance from the opaque body
Shadowing.

And the reafon is, becaufe all Shadows are pyramidal ; in
which cafe, fpace of place prevails with the light againft the ma-
do w.

8. Where contrary Shadows concur, let the meaner! and mo ft
folid body be firft ferved ; and, in double and triple Shadows, let
the firft lines be very dry, before you crofs them, for fear of
blotting.

9. Ail perfect lights receive no Shadow at all; but, being ma-
nifeft, are only to be made apparent by that body that receives
them, whofe Shadow muft be according to the efflux of light ;
but the colour of the light ought to agree with the medium
which receives it; whether it be air, cryftal, water, amber,
glafs, tranfparent wine, or the like.