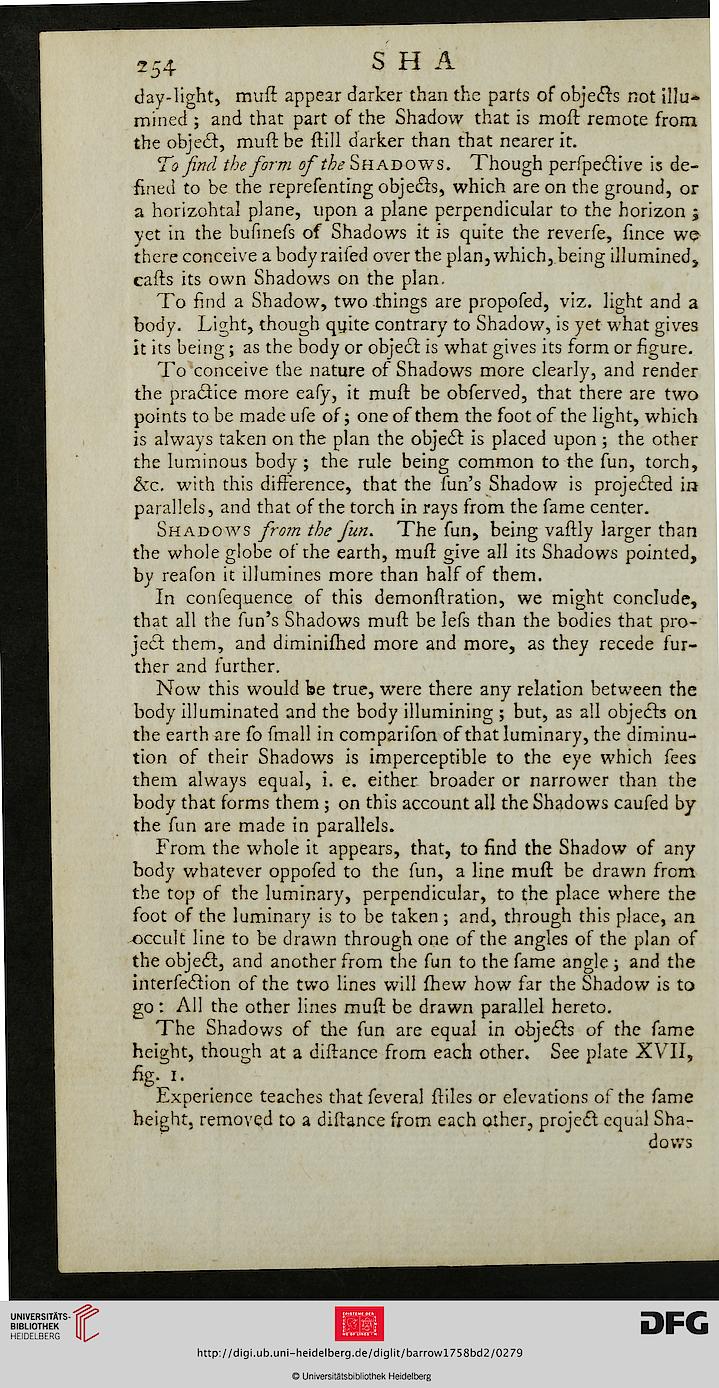 day-light, muft appear darker than the parts of objects not Illu-
mined ; and that part of the Shadow that is moll remote from
the object, mull be {till darker than that nearer it.

To find the form of /^Shadows. Though perfpective is de-
fined to be the reprefenting objects, which are on the ground, or
a horizohtal plane, upon a plane perpendicular to the horizon ;
yet in the bufinefs of Shadows it is quite the reverfe, fince we
there conceive a body railed over the plan, which, being illumined,
cafts its own Shadows on the plan,

To find a Shadow, two things are propofed, viz. light and a
body. Light, though qyite contrary to Shadow, is yet what gives
it its being; as the body or object is what gives its form or figure.

To conceive the nature of Shadows more clearly, and render
the practice more eafy, it mull be obferved, that there are two
points to be made ufe of; one of them the foot of the light, which
is always taken on the plan the object is placed upon ; the other
the luminous body; the rule being common to the fun, torch,
&c. with this difference, that the fun's Shadow is projected in
parallels, and that of the torch in rays from the fame center.

Shadows from the fun. The fun, being vaftly larger than
the whole globe of the earth, muft give all its Shadows pointed,
by reafon it illumines more than half of them.

In confequence of this demonflration, we might conclude,
that all the fun's Shadows muft be lefs than the bodies that pro-
ject them, and diminifhed more and more, as they recede fur-
ther and further.

Now this would be true, were there any relation between the
body illuminated and the body illumining ; but, as all objects on
the earth are fo fmall in comparifon of that luminary, the diminu-
tion of their Shadows is imperceptible to the eye which fees
them always equal, i. e. either broader or narrower than the
body that forms them ; on this account all the Shadows caufed by
the fun are made in parallels.

From the whole it appears, that, to find the Shadow of any
body whatever oppofed to the fun, a line muft be drawn from
the top of the luminary, perpendicular, to the place where the
foot of the luminary is to be taken; and, through this place, an
occult line to be drawn through one of the angles of the plan of
the object, and another from the fun to the fame angle ; and the
interferon of the two lines will fhew how far the Shadow is to
go: All the other lines muft be drawn parallel hereto.

The Shadows of die fun are equal in objects of the fame
height, though at a diftance from each other. See plate XVII,

Experience teaches that feveral ftiles or elevations or the fame
height, removed to a diftance from each other, project equal Sha-
dows