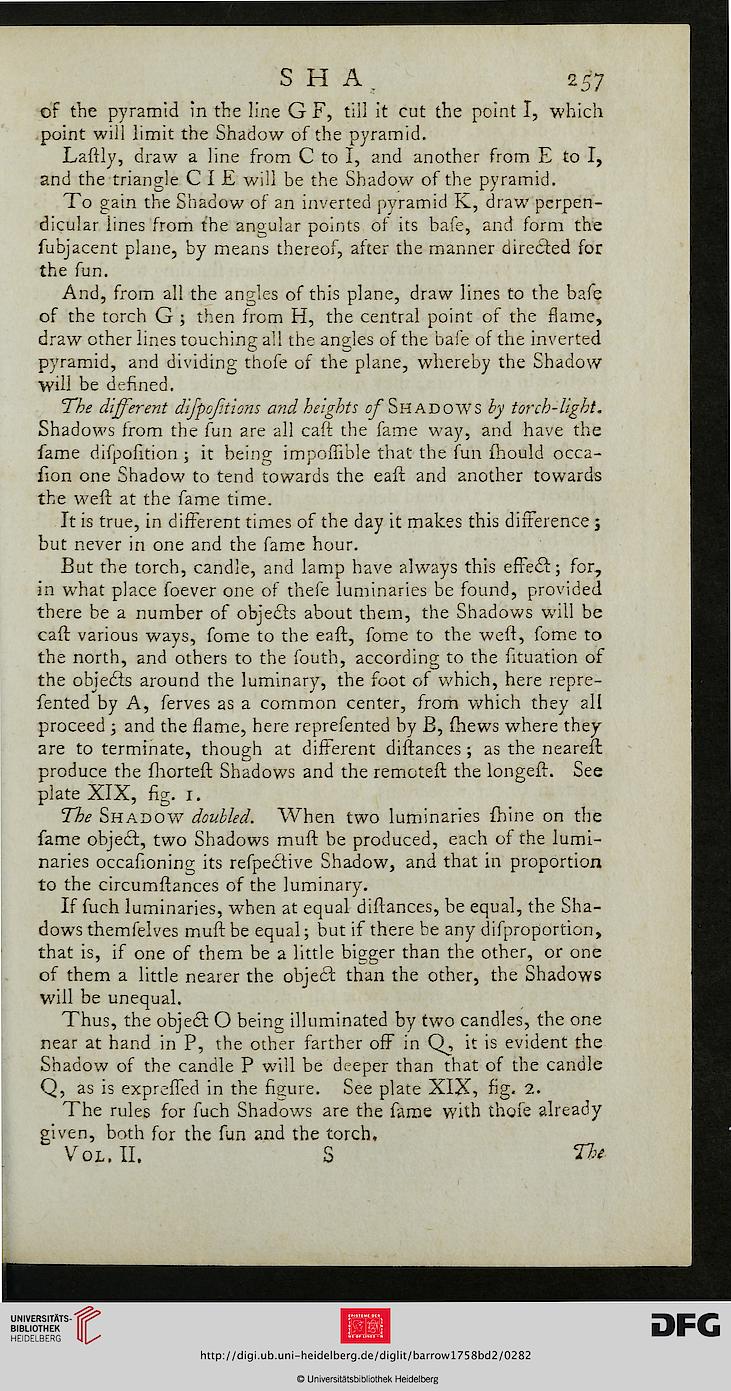 Laftly, draw a line from C to I, and another from E to I,
and the triangle C I E will be the Shadow of the pyramid.

To gain the Shadow of an inverted pyramid K, draw perpen-
dicular lines from the angular points of its bafe, and form the
fubjacent plane, by means thereof, after the manner directed for
the fun.

And, from all the angles of this plane, draw lines to the bafe
of the torch G ; then from H, the central point of the flame,
draw other lines touching all the angles of the bafe of the inverted
pyramid, and dividing thofe of the plane, whereby the Shadow
will be defined.

The different difpof.tions and heights c/* Shadows by torch-light.
Shadows from the fun are all caft the fame way, and have the
fame difpofition ; it being impoffible that the fun fhould occa-
fion one Shadow to tend towards the eaft and another towards
the weft at the fame time.

It is true, in different times of the day it makes this difference;
but never in one and the fame hour.

But the torch, candle, and lamp have always this effect; for,
in what place foever one of thefe luminaries be found, provided
there be a number of objects about them, the Shadows will be
caft various ways, fome to the eaft, fome to the weft, fome to
the north, and others to the fouth, according to the fituation of
the objects around the luminary, the foot of which, here repre-
fented by A, ferves as a common center, from which they all
proceed ; and the flame, here reprefented by B, fhews where they
are to terminate, though at different diftances; as the neareft
produce the fhorteft Shadows and the remoteft the longeft. See
plate XIX, fig. 1.

The Shadow doubled. When two luminaries fhine on the
fame object, two Shadows muft be produced, each of the lumi-
naries occafioning its refpec~tive Shadow, and that in proportion
to the circumftances of the luminary.

If fuch luminaries, when at equal diftances, be equal, the Sha-
dows themfelves muft be equal; but if there be any difproportion,
that is, if one of them be a little bigger than the other, or one
of them a little nearer the objecf than the other, the Shadows
will be unequal.

Thus, the obje£t O being illuminated by two candles, the one
near at hand in P, the other farther off in Q_, it is evident the
Shadow of the candle P will be deeper than that of the candle
Q, as is expreffed in the figure. See plate XIX, fig. 2.

The rules for fuch Shadows are the fame with thofe already
given, both for the fun and the torch.