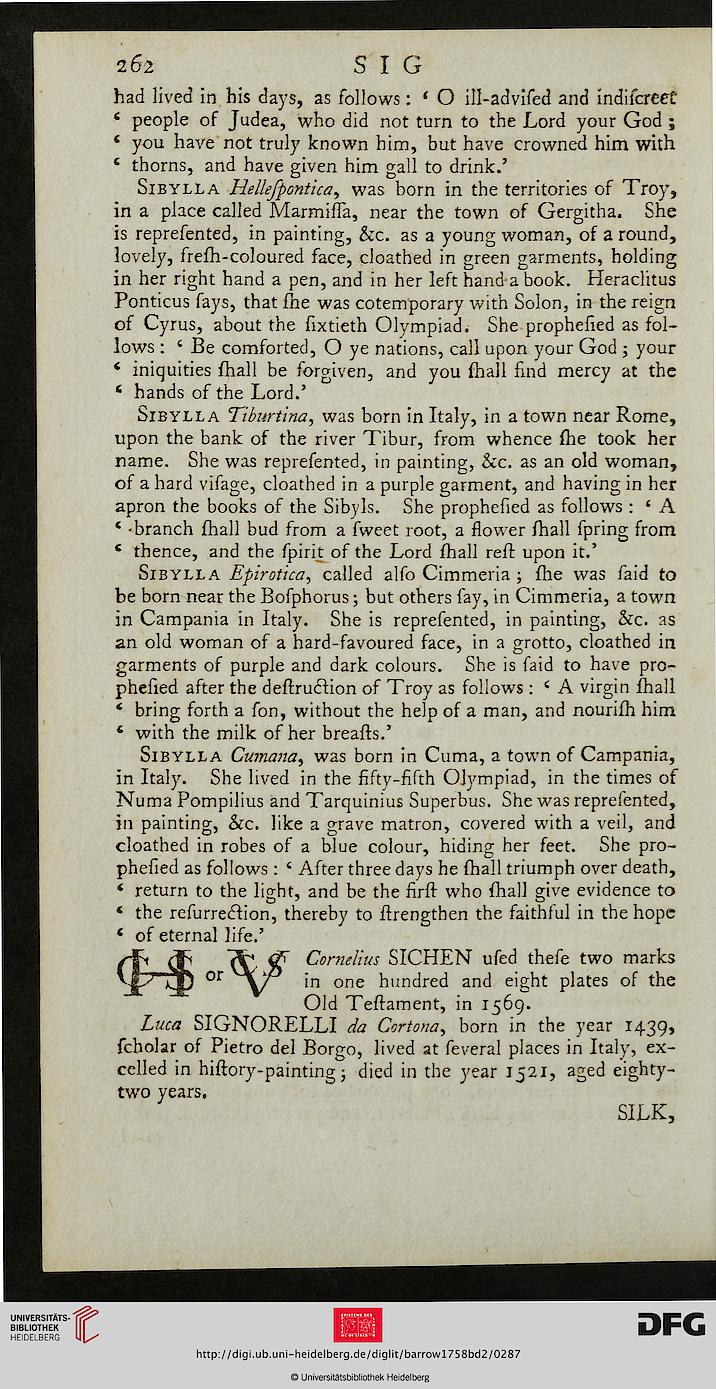 had lived in his days, as follows: * O ill-advifed and indifcrcet
' people of Judea, who did not turn to the Lord your God ;

* you have not truly known him, but have crowned him with
e thorns, and have given him gall to drink.'

Sibylla Hellefpontica, was born in the territories of Troy,
in a place called MarmiiTa, near the town of Gergitha. She
is reprefented, in painting, &c. as a young woman, of a round,
lovely, frefh-coloured face, cloathed in green garments, holding
in her right hand a pen, and in her left hand a book. Heraclitus
Ponticus fays, that fhe was cotemporary with Solon, in the reign
of Cyrus, about the fixtieth Olympiad. She prophefied as fol-
lows : ' Be comforted, O ye nations, call upon your God ; your
' iniquities fhall be forgiven, and you (hall find mercy at the
' hands of the Lord.'

Sibylla Tiburtina, was born in Italy, in a town near Rome,
upon the bank of the river Tibur, from whence (he took her
name. She was reprefented, in painting, &c. as an old woman,
of a hard vifage, cloathed in a purple garment, and having in her
apron the books of the Sibyls. She prophefied as follows : ' A

* -branch fhall bud from a fweet root, a flower fhall fpring from
6 thence, and the fpirit of the Lord fhall reft upon it.'

Sibylla Epirotica, called alfo Cimmeria ; fhe was faid to
be born near the Bofphorus; but others fay, in Cimmeria, a town
in Campania in Italy. She is reprefented, in painting, &c. as
an old woman of a hard-favoured face, in a grotto, cloathed in
garments of purple and dark colours. She is faid to have pro-
phefied after the deftruclion of Troy as follows: ' A virgin fhall

* bring forth a fon, without the help of a man, and nourifh him

* with the milk of her breafts.'

Sibylla Cumana, was born in Cuma, a town of Campania,
in Italy. She lived in the fifty-fifth Olympiad, in the times of
Numa Pompilius and Tarquinius Superbus. She was reprefented,
in painting, &c. like a grave matron, covered with a veil, and
cloathed in robes of a blue colour, hiding her feet. She pro-
phefied as follows: ' After three days he fhall triumph over death,

* return to the light, and be the firft who fhall give evidence to

* the refurreclion, thereby to ftrengthen the faithful in the hope
' of eternal life.'